3D printing is slowly becoming mainstream, even in the biomedical industry (custom-made bone casts come to mind), but the technology is still in its infancy. Just like 2D printing was revolutionized by the arrival of multi-color inks, so is 3D printing making the jump with the combination of multiple materials into one printed device. A great example of this technological leap with repercussions for biomedicine was reported in a new paper from Jennifer Lewis, Kevin Parker and colleagues from the Wyss Institute for Biologically Inspired Engineering at Harvard University.

In their article, published in Nature Materials last October, the researchers used sequential deposition of six functional inks to create a new culture system for cardiomyocytes. The different inks used in the printing of the device, selected for their biocompatibility, piezo-resistance and high conductance, enabled the integration of sensors to measure electrical changes in resistance. Each 3D-printed culture chip is composed of eight independent wells organized in a cantilever structure that allows for deflection of the culture during tissue contractions (Figure 1). The strain and electrical sensors embedded in the device are intended to measure changes in stress and electrical resistance during physiological contraction of the cardiac microtissues after, for example, addition of a drug. 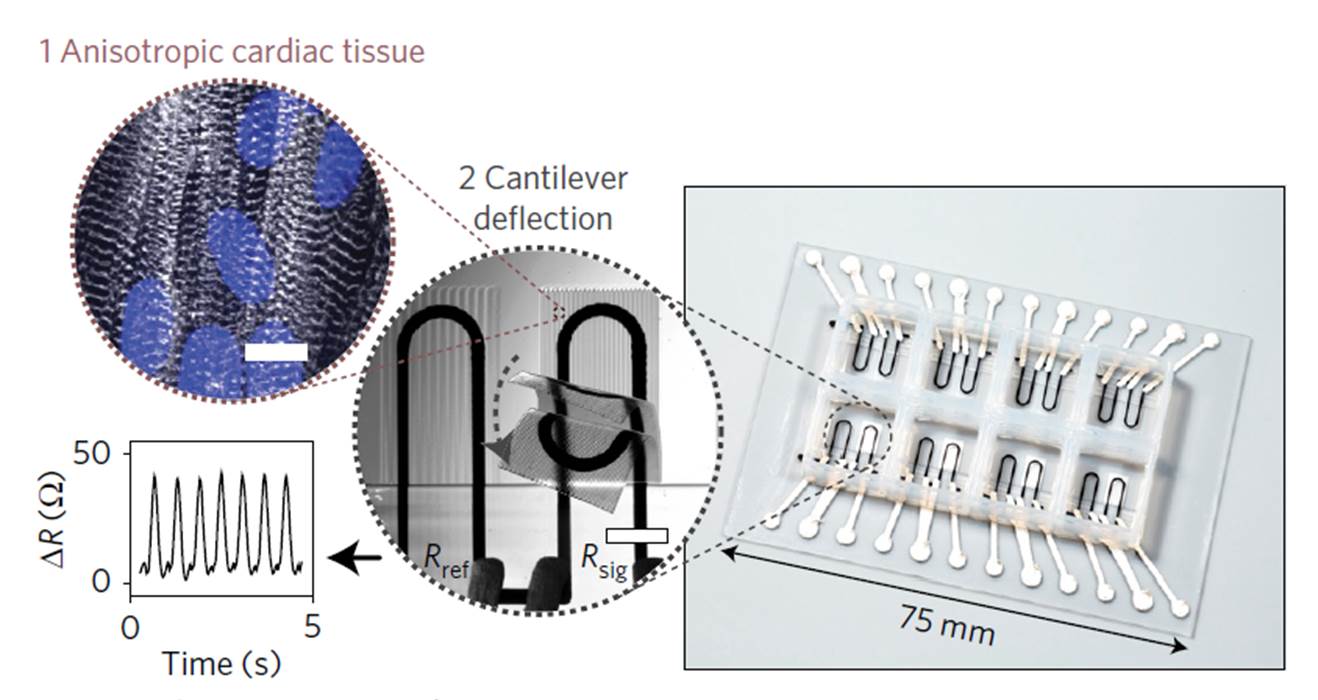 Regular spacing of polydimethylsiloxane (PDMS) microfilaments, deposited during the printing process, was introduced to guide tissue organization. When cultured on a pattern of ‘grooves’ with 60 μm spacing, neonatal rat ventricular myocytes self-organize as anisotropic microtissues that mimic the heart musculature architecture (Figure 2). This polarized structural arrangement leads to efficient, unidirectional action potential propagation in the microtissues in parallel to the grooves with a transverse velocity ratio similar to what is observed in native ventricles. Notably, the researchers showed that human induced pluripotent stem cell-derived cardiomyocytes could be maintained in culture for up to 28 days. 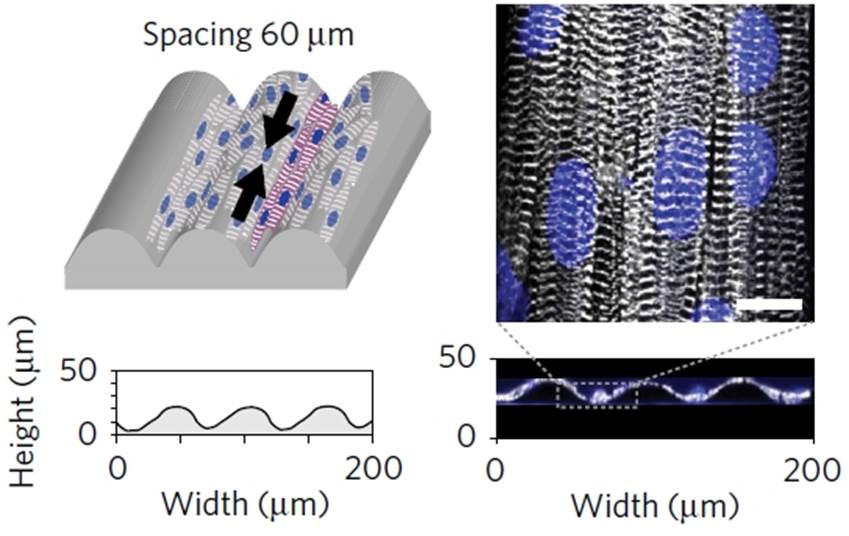 The relevance of the device lies on its potential for cardiac drug testing. The patterned tissue organization of the cultured cells, the deflection properties of the device and the sensors embedded in the wells all combine to enable the close monitoring of drug responses in cultured myocytes. To illustrate the device’s capabilities, the researchers performed dose-response experiments in which rat and human cardiomyocytes were exposed to verapamil, an L-type calcium channel blocker, and isoproterenol, a β-adrenergic agonist. The effect of the drugs on myocyte contraction rate was quantified, showcasing the device’s data-acquisition capabilities and biomedical potential as a cardiac cell drug testing platform.