Pathologies that belong to different types of multiple sclerosis display a range of neuropathological symptoms that all result in nerve damage instigated by the body’s own immune cells. Neural cells that transmit signals along the length of the nerve fibres need to be protected by a fatty acid layer – the myelin sheath – that becomes scarred in MS, leading to the progressive loss of signal transmission. In the brain, a series of protective layers prevents the infiltration of cells and other compounds, including imaging agents, to reach the brain. The most up-to-date experimental model that effectively recapitulates some of the early events that lead to MS include the breaking down of the protective layers in the central nervous system (CNS). In particular, white blood cells, or leukocytes, are thought to be in part responsible for disease onset as they cross the inner seal of the microvasculature, effectively rupturing the blood–brain barrier (BBB), and then also manage to cross the parenchymal basement membrane. In the mouse model, only the second step has been associated with symptomatic disease progression and is therefore considered a critical event in MS onset.

In a recent article, published in November in Science Translational Medicine, research led by Lydia Sorokin and Michael Schäfers at the University of Münster, Germany, shows that it may be possible to non-invasively detect disease onset and progression using non-invasive imaging technologies. Gerwien et al. developed a tracer capable of reporting the local concentration of matrix-metalloproteinase-2 and -9 (MMP2-9). These proteins are known to be responsible for the degradation of the extracellular matrix, enable crossing of the BBB and breaking the endothelial and astrocyte sheath layers. Their expression is believed to regulate the autoimmune inflammation process in MS. 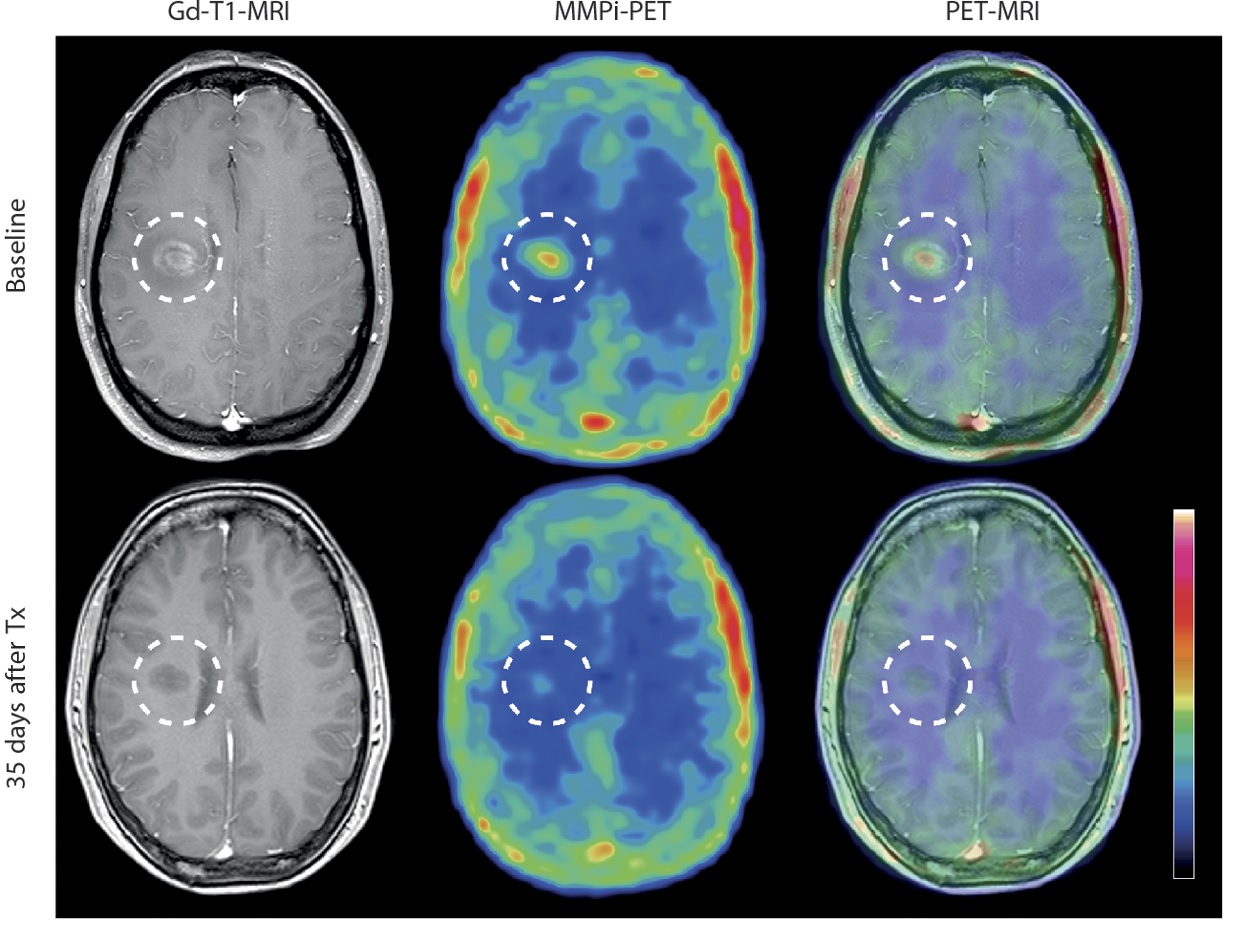 Figure: A Gadolinium-enhanced T1-MRI image is co-registered with an MMPi-PET scan in a patient suffering from an acute attack of relapsing-remitting MS and shows the MMPi tracer is sensitive to the treatment with the corticosteroid methylprednisolone (Tx).

The tracer is derived from an already characterised MMP-inhibitor molecule and synthesized to carry either a fluorescent dye or a radioisotope. The authors show that, in a mouse model of experimental autoimmune encephalomyelitis (EAE), the near-infrared version of their tracer (Cy5.5-MMPi) accumulates in the brain in a manner that is correlated with disease progression, whereas it did not give any readout from the brain of naïve animals. The authors were able to localize the signal specifically to leukocytes that crossed the first CNS basement membrane but have not yet penetrated the parenchymal border of the BBB.

In patients, T1-gadolinium-enhanced magnetic resonance imaging (T1-Gd MRI) is able to resolve lesions; however this imaging modality cannot distinguish which lesions are newer and have an on-going infiltration process and is, therefore, ineffective at measuring lesion age. In humans, the radiolabelled tracer 18F-MMPi was detected using positron emission tomography (PET) and shown to distinguish between lesions with ongoing leukocyte infiltration, lesions with post-inflammatory BBB dysfunction (where leukocytes are no longer present) and patients receiving anti-inflammatory treatment. Because one of the main features in the diagnosis of MS relies on the ability to detect the gradual appearance of lesions in the brain and the CNS, it follows that the ability to detect one of the critical events associated with BBB rupture and its associated localized inflammation may have significant impact in the way these diseases are managed and treated.