Multiphoton intravital microscopy of mitochondrial dynamics is a diagnostic feature in human cancer .

Amongst the metabolic reactions that define mitochondrial function, the oxidation of the coenzyme nicotinamide adenine dinucleotide (NADH) is critically important. In redox metabolism, the cycling of NAD+/NADH in beta oxidation regulates the conversion of ADP to ATP via the electron transport chain. Of particular interest within the field of molecular imaging are the fluorescent properties of NADH, that emits fluorescent light at around 470 nm, making it ideally suited as a label-free biomarker for mitochondrial metabolism. Multiphoton microscopy (MPM) can provide subcellular resolution and NADH signal detected using two-photon–excited fluorescence (TPEF) shows spatial overlap with mitochondria.

Pouli and colleagues, as published in the November issue of Science Translational Medicine, report on the first clinical demonstration that NADH fluorescence can be detected quantitatively in vivo using TPEF and can be used to differentiate between cancer cells and healthy tissue. TPEF has low depth penetration, but does provide subcellular resolution; the authors therefore performed this study on human epidermal layers, in particular focusing on two distinct layers: a more superficial layer, located between 20 and 25 um of the surface, and a deeper layer, located between 35 and 40 um which is closer to the dermal vasculature. The authors recorded NADH intensity levels at 10 second intervals before, during and after arterial occlusion performed to induce ischemic stress. They were able to follow the response to acute ischemic stress, highlighting the difference in metabolic response to vascular oxygenation. A Fourier transform for NADH intensity values was fitted to an exponential decay model where its extrapolated exponent was used as a metric for mitochondrial organisation and clustering. The method was developed in vitro to show that, in keratinocytes, induced acute hypoxia could be monitored and recovery occurred over a period of 30 minutes. The results were replicated in human healthy epidermis, where the mitochondrial clustering was found to be depth-dependent. In the diseased epidermis of basal cell carcinoma and melanoma patients, mitochondrial clustering did not correlate to depth, but rather the histological stratification was lost and a more uniform signal was observed.

Having established the potential of TPEF in distinguishing the depth-dependent distribution of features that relate to structure and function, the authors set out to establish the diagnostic potential of three uncorrelated metrics. The depth-dependent stratification of mitochondrial clustering was compared to the median mitochondrial clustering and the depth-dependent nuclear-to-cytoplasmic ratio in healthy and diseased tissues and analysed using a linear discriminant model. The data showed high specificity and high sensitivity to cancer dynamics, as opposed to inflamed or healthy tissue, and the method was reproducible in a randomized patient cohort. 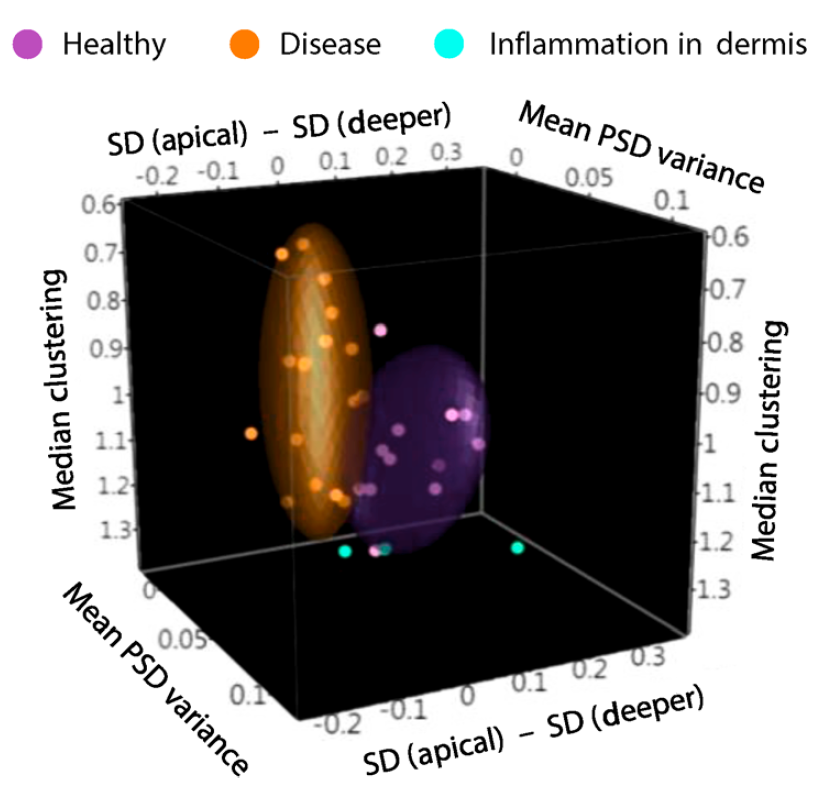 Changes in mitochondrial activity have been described to occur in many different types of cancer cells using a variety of molecular biology and biochemical assays. However the methods used to draw conclusions in regards to events governing mitochondrial metabolism, fusion and fission can be primarily found in basic research studies. Their translational relevance has remained elusive, largely in view of the limitations posed by scaling up to mesoscopic-level fast events that occur at micrometer resolution. These events can be tagged in the laboratory using fluorescent probes that, again, have not yet been adopted for use in the clinic.


The major implications of this study are that label-free imaging of molecular signatures in vivo are sensitive to morphofunctional characteristics related to mitochondrial metabolism. This advances on current histopathological analysis that can measure depth variations and mitochondrial fission but is inherently insensitive to dynamics. Of course, the limited field of view of MPM and the cost of the lasers is a serious limitation to the implementation of this technique into clinical practice; nevertheless real-time detection of mitochondrial dysfunction is widely applicable to human diseases.