Peering into the foreign body response to biomaterials. A story about biomaterials research inspired by cancer biology

A couple of years ago, as a trained tumour biologist with strong interest in the tumour microenvironment, I never envisioned ever making relevant contributions to non-cancer fields. Then I joined Dr. Peter Friedl’s lab at the MD Anderson Cancer Center to start a project with the aim to combine intravital multiphoton microscopy with tissue engineering to monitor tumour progression in collaboration with the team of Dr. Dietmar Hutmacher.

Scaffolds made with polycaprolactone (PCL), a polymer that has recently been re-discovered for many clinical applications after years of oblivion1 represented a key component of the experimental setting. As a first trial, we tested whether PCL fibres could be detected by multiphoton microscopy. The first scan already revealed that third harmonic generation, a contrast modality that we had just discovered to be relevant for cancer imaging2, gave outstanding imaging definition in vitro, so that even substructures within the fibres could be resolved. We then tested whether PCL fibres could be detected after implantation in vivo, and therefore used a window-chamber system in living mice, a very popular approach for intravital imaging in (and outside) our lab. This titanium chamber integrates a glass and, when surgically implanted onto the mouse skin fold, provides direct access for the observation of subcutaneous tissue and any implanted tissues or materials3.

As soon as we imaged the scaffold in the skin, we realized that, besides effectively visualizing PCL fibres in the living mouse, amazing and unexpected biology (for us), such as neoangiogenesis and fibrosis, was occurring a few days later. After some reading, we realized that we opened a window to watch the evolution of the foreign body response (FBR) in 3D and over time (Video).

The FBR is a process evolved to deal with any foreign body that penetrates into tissue and that could potentially injure it. It is composed by a sequence of cellular and molecular events, to either digest the object and reinstall tissue integrity or, if the material cannot be resolved, to shield the object by fibrotic encapsulation4. Designed by nature to protect healthy tissue from foreign assault, the FBR is a clinical problem; for example, the fibrotic encapsulation of implanted medical devices (such as sensors, pacemakers, prostheses and scaffolds) used in tissue engineering and regenerative medicine can lead to malfunction and even graft failure.

From histological and molecular analysis, the steps of the FBR are well established: a sequence starting with vascular damage, plasma-protein engagement with the implant, followed by neutrophilic inflammation and recruitment of monocytes/macrophages, which fuse to generate giant cells and bind to the implant material. In parallel, a new vascular network is formed5,6. However, it is not clear whether the neovessels worsen the FBR and thus are central to the biomedical problem, or whether they are a gatekeeper that provides metabolic homeostasis and actually limits the response. When reconstructing the vessel network in 3D by intravital imaging, we noted that its organization was virtually indistinguishable from the chaotic neoangiogenic vasculature of a tumour during a process called desmoplasia. Here, the microenvironment reacts as a wound that cannot heal7, with deposition and remodelling of connective tissue and spreading of a disorganized vascular infiltration. Among the stromal components, macrophages contribute to this process, and lead to cancer progression8. We became stimulated by these findings, and reasoned about the therapeutic implications of the modulation of the FBR. We ultimately decided to apply long-term macrophage inhibition and an anti-angiogenic drug as interference strategies, as used in the cancer therapeutics field. In the context of research on the FBR, this approach contrasted with existing ideas and therapy attempts to enhance graft integration, for example by sustaining vessel development9. By combining both interferences, we found out that both myeloid inflammation and neoangiogenesis are interdependent and function in series: by secreting pro-angiogenic factors, macrophages/giant cells sustain the development of the vascular network which, reciprocally, supports further recruitment of myeloid cells, forming a feed-forward loop.

In summary, I entered this journey as a tumour biologist guided by biomaterials research, a topic that was beyond my comfort zone. My training in cancer research has however helped me to transfer imaging technology outside of the box and to deliver mechanistically unexpected insights into a fundamental tissue response to a bioengineered material.

4. Ward, W.K. A Review of the Foreign-body Response to Subcutaneously-implanted Devices: The Role of Macrophages and Cytokines in Biofouling and Fibrosis. Journal of Diabetes Science and Technology 2, 768-777 (2008). 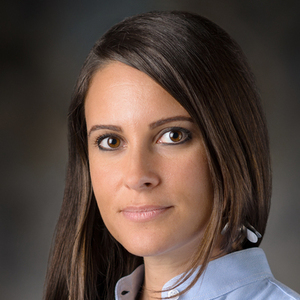 Erping Long
over 4 years ago
Amazing image and video. Congratulations!