Surface engineering materials for improved interactions in an in-lab biological microenvironment prior to translating novel coating technology to a cardiovascular stent.

Our study in bioengineering arrived at the main conclusion that a plasma physics based coating technology used to modify a material surface, can be applied to existing commercially available cobalt chromium stents, for improved biocompatibility. Research included experimental work in engineering, plasma physics and biochemistry to address primary aims, completed at the University of Sydney, Australia. The development of cardiovascular stents to treat coronary artery disease (CAD), was a significant early innovation (1). The challenge of addressing sub-optimal biocompatibility of cardiovascular stents via reproducible, multidisciplinary research, led to my interest in bioengineering cobalt chromium stent material alloy L605 (2). 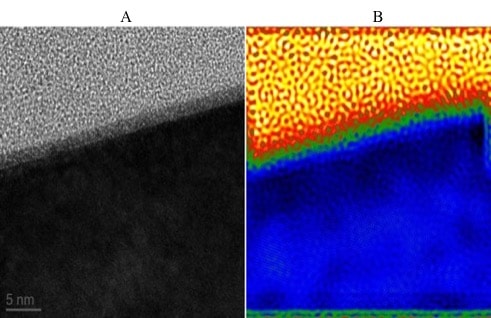 Figure 1. The HRTEM image (A) and corresponding inverse fast Fourier transform (IFFT) pseudo colour image (B) show the PAC-L605 interface. Notice nanoscale ionic stitching seen in gray (A) and green (B) in the corresponding images at 1.2 M x magnification and 1.1 Å resolution. Figure reproduced from reference (10).

Confirmatory results proved covalent protein binding capacity on PAC-L605 with extra cellular matrix protein tropoelastin (TE) (9). The recombinant human tropoelastin used in the study was synthesized and provided by the lab of Professor Anthony Weiss, School of Biochemistry and Molecular Biotechnology, University of Sydney (13). The outcome resulted in the use of PAC-L605 with TE (PAC-L605-TE) as another variable of surface modification, for in-lab tests conducted to understand cell-material and blood-material interactions. In total I used five different biomaterial surfaces to first observe cell on material interactions. After 5 days of cell culture, homogeneous anchorage of human coronary artery endothelial cell (hCAEC) cytoskeleton was observed on PAC2 surfaces with or without tropoelastin (Figure 2).

Figure 2. The filamentous actin (F-actin) cytoskeleton of HCAECs on biomaterials identified and visualized with immunofluorescent staining at 40x magnification. F-actin were homogeneously spread on PAC2 surfaces with/without tropoelastin (highlighted in red) and chosen for further experiments in cell-material culture (9). Figure reproduced from reference (9).

Next, to understand blood-material interactions, I first conducted static platelet rich plasma (PRP) assays and observed that protein in PRP prevented platelet/fibrin adherence to hydrophilic PAC and PAC/TE surfaces, while fibrinogen fibrils and platelets adhere to alloy L605 (Figure 3) (9). The PAC surfaces were exposed to air over a period of time, to induce surface oxidation/ageing and reassessed with static PRP, to show that PAC retained hemocompatibility with age (9). Blood-material contact was also conducted under modified flow conditions with 5 different biomaterials, as with cell culture before, to demonstrate lower clot formation specifically on PAC1 recipe surfaces, with or without tropoelastin. Similar to static assays, flow assays too did not show reduced hemocompatibility of PAC with age (or time of exposure to air) (9). After blood flow tests, I conducted immunofluorescent staining of material surfaces to quantify surface fibrin, and results showed significantly lower deposition of fibrin on the hemocompatible PAC (Figure 4). 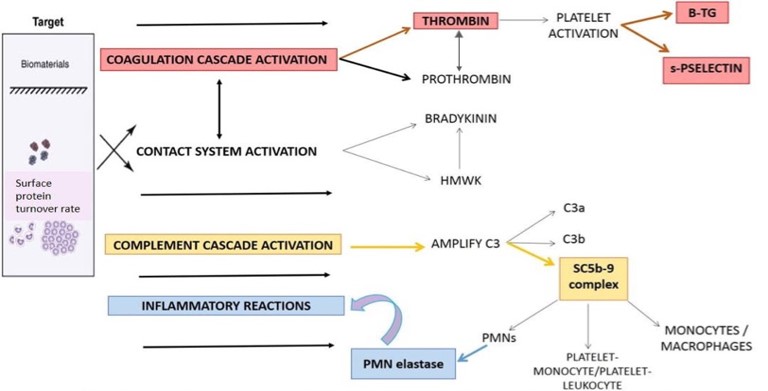 Figure 5. A highly simplified summary of the biochemical reactions triggered after blood-biomaterial contact. The highlighted components were quantified in the study. Figure reproduced from reference (9).

To recap, the study demonstrated biofunctionalization of plasma modified cobalt chromium surfaces (PAC-L605) in vitro for the first time, with applications at the artery-stent material interface for vascular compatibility of cardiovascular stents. A notable observation in bioengineering material surfaces for biofunctionalization is that isotropic nanoscale structures developed with micron-/sub-micron scale roughness facilitate cell anchorage, proliferation and differentiation (10)(14). The cell cytoskeleton is theorized to play an integral role in biomechanical sensing for coordinated attachment to a substrate (15) as inferred in the study. The in vitro models of hemocompatibility were an oversimplification of a very complex physiological system, based on previous experimental standardization (16) (17). The hemocompatibility of PAC surfaces (with/without tropoelastin) observed during flow, static and standardized blood assays were related to surface hydrophilicity (10)(18), furthermore, the properties of surface modification retained overtime regardless of surface oxidation/ageing. The multidisciplinary study arrived at the main conclusion that PAC technology used to modify alloy L605, can be applied to existing commercially available cobalt chromium stents for further in lab tests, prior to pre-clinical investigations (9).