Human-organ-level function on a microchip

A summary of reverse-engineering-based developments of microfluidic cell-culture devices to simulate tissue- and organ-level physiology in the lab.
Thamarasee Jeewandara
Academic research scientist (incoming), University of California San Francisco, previously at RFCUNY/UND
Follow
Liked by Ben Johnson and 2 others

The integration of materials and life sciences to bioengineer miniature, microfluidic devices that mimic complex organ systems, with applications in biomedical research, has always intrigued me. The so-called organ-on-a-chip devices allow complex human organ systems to be reduced into smaller and simpler subsystems, to gain insight to higher-order intercellular communication in the lab (1). The approach enables unprecedented value in basic and applied research, beyond what has been accomplished with animal models or conventional culture systems so far (1). Specific applications indicated for human-organ-level function on a chip include; i) insight to cellular behaviour during disease progression, ii) cost-effective pharmaceutical drug trials and iii) diagnostics/therapeutics to prevent disease. The fundamental design principle of microfluidics-device development is based on ‘reverse engineering’ living organs (2); in which living systems are conceptually deconstructed to identify their minimal requirements to function as a whole. First principles of normal organ physiology thus include an interface between parenchymal tissue (epithelium, connective, nerve tissue) and vascular tissue (blood vessels) to form tissue–tissue interfaces with mechanical and neurochemical cues. Minimal design principles for microfluidic organs-on-chips therefore require critical reconstitution of tissue–tissue interfaces with continuous vascular perfusion and an organ-relevant microenvironment (2). This post hopes to summarize the reverse-engineering-based, bioinspired, miniature organ-on-a-chip device-development technology and some of its biomedical applications.

Advancements in the field then allowed connection of two or more independently perfused, parallel porous microchannels lined with different cell types on opposite sides, to create alveolar-capillary or blood-brain-barrier interfaces within a single microfluidic device (5–7). To accurately simulate organ-specific physiological responses, these advanced systems also incorporated physical forces such as shear stress, cyclic strain, air/liquid interfaces, electrical signals and mechanical compression (1). In order to mimic complex organ-level tissue–tissue responses, additional tissue types including circulating immune cells, connective tissue cells, neuronal cells and even microbiome were integrated into the system (7,8). For higher order, multi-organ physiological coupling studies, different organ–chips were linked fluidly to each other (9). All miniaturized, microfluidic devices allowed high-resolution, real-time imaging for analyses of physiological responses, some of which are summarized (Table 1).

Specific device developments include; microengineered blood-brain-barrier (BBB)-on-a-chip to analyze intercellular signaling that mediates neuroinflammation (8), human lung-on-a-chip formed via alveolar-capillary interface reconstitution to investigate IL-2 drug-toxicity-induced pulmonary edema (10), human small-airway-on-a-chip to investigate the etiology of chronic obstructive pulmonary disease (COPD) in patients (5) and human-gut-on-a-chip to understand the progression of inflammatory bowel disease (11). To clarify the advanced fabrication process, I have linked to a short video (Video 1) on the development and uses of human small-airway-on-a-chip (5), produced by the Wyss Institute for biologically inspired engineering at Harvard University.

Diagnostic applications of devices include the in vitro study of cancer, in which novel engineering techniques combined viscous-finger patterning methods to create a lumen containing ductal carcinoma in situ (DCIS) cells, within the microfluidic device (12). Briefly, the completed organ-on-a-chip resembled DCIS lesion formation surrounded by normal mammary epithelial cells, to simulate cancer progression and enable diagnostics (12). As mentioned earlier, researchers showed the potential to form increasingly complex multiple organs, linked via system compartmentalization to enable physiological homeostasis in the lab (9). The four-organ-chip system comprised a human intestine, liver, skin and kidney, which maintained stable glucose balance between the interlinked systems of intestinal lumen, culture-medium circuit and excretory circuits for at least 4 weeks in culture (9). However, in this multiple organ-linkage model, fluid movement was facilitated via parenchymal tissue spaces and not via a typical physiologically relevant endothelium vascular channel (2). Nevertheless, the work demonstrated the potential to study signal transfer between different organs and to analyze human organ–organ coupling in a lab environment.

The collaborative work of scientists and engineers on microfluidic-device development have provided a unique approach to investigate intricate, intercellular communication that seem avant-garde in light of existing conventional techniques in biomedical research. Reverse engineering creates a window on molecular-scale activities of living cells within a functional tissue and organ context. Since the cells cultured within devices are mainly induced pluripotent stem cells (iPSCs) (13), it is possible to isolate them from a subpopulation or an individual to permit personalized analyses of disease mechanisms and organ-level response to drugs (13), providing cost-effective technical advancements for the pharmaceutical and biotechnology industry. Despite the enormous potential to decipher cell communications at the organ level, the field is still largely in its infancy (1,2). Advancements in organ-on-chips may ultimately provide a simple, robust and miniaturised platform to interpret disease mechanisms, help conduct efficient clinical trials of drugs and identify molecular biomarkers at a personalised level (1,2) which may well be revolutionary.

Pep Pàmies
over 5 years ago
Thanks much for the insightful post, Thamarasee. Indeed, although there is a lot of room for improvement in the design, fabrication and implementation of organs-on-chips, they are incredibly promising for cheaper, faster and more robust disease modelling and drug screening.

Mapping the electrical system of the heart

Stent technology in the treatment of coronary artery disease 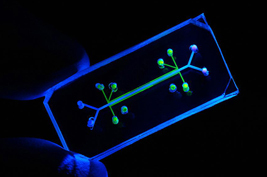 Human-organ-level function on a microchip

A summary of reverse-engineering-based developments of microfluidic cell-culture devices to simulate tissue- and organ-level physiology in the lab.