On the use of human pluripotent stem cell (hPSC) systems to study cellular and molecular mechanisms of cardiac cell fate and to understand disease mechanisms in the early human heart.

Two recent articles, on the necessity of scientific engagement and on safeguarding science1, mutually aim to raise awareness on many fronts in 2017, including innovations of biomedical research. One such innovation, of personal interest, is stem cell therapy for heart disease, which offers potential to understand disease mechanisms and reverse pathological effects of what was once considered terminal heart damage2. Stem-cell-based advances in cardiovascular medicine are twofold; 1) as a cellular resource for therapeutic regeneration of adult failing hearts, and 2) as a research system to model inherited disease of the developing heart3,4. The focus here is on the field of human pluripotent stem cells (hPSCs)5, which includes human embryonic stem cells (hESCs) and human induced pluripotent stem cells (hiPSCs), with diverse medical applications6,7. This post highlights applications of stem-cell-based models to understand congenital (inherited) heart disease (CHD), the most common human birth defect4, and outlines breakthrough technologies in biology6,7.

Prior to noting in-lab experiments and clinical applications in cardiovascular medicine, a few developmental biology terms are recapped for clarity. Briefly, three basic categories of cells; germ, somatic and stem comprise the mammalian body, and cellular differentiation is simply defined as the change of cell fate from one cell type to another8. Both somatic and germ cells originate from pluripotent cells of the embryo, and the possibility exists to deliberately reprogram cells from one tissue type to another in-lab, via treatment with defined factors6. Mature somatic cells can thus be reprogrammed back to pluripotency (ability to form any cell type) via recently developed induced pluripotent stem cell (iPSC) technology, creating exciting approaches in basic research and regenerative medicine4,6. Prior to this development, differentiation was assumed to be a ‘one-way street’ process from an immature, stem or progenitor cell state, to mature differentiation alone9. The ‘cell-nuclear reprogramming’ technology therefore demonstrates that mature somatic cells retain all genetic information, enabling re-acquisition of pluripotency7,9 (Figure 1). Classical animal models have contributed tremendously at the beginning to evaluate disease mechanisms6 and continue to do so, although they are limited by the accuracy of recapitulation of human disease. Here the focus is entirely on human stem-cell-based CHD models.

While CHD is the most common human birth defect at present with known contribution of genetic and environmental stressors, mechanisms of its etiology (origin) remain an enigma2,4. To understand CHD mechanisms, it is possible to first obtain patient-specific skin cells or blood samples (as a somatic cell source), reprogram them to pluripotent stem cells using a small set of reprogramming factors and then differentiate those cell-forms to create heart muscle cells known as cardiomyocytes (CM) in a Petri dish, at the lab (Figure 2)4,6. The protocol resulted in functional, spontaneously beating heart muscle cells with features characteristic to physiological CMs of the heart4. 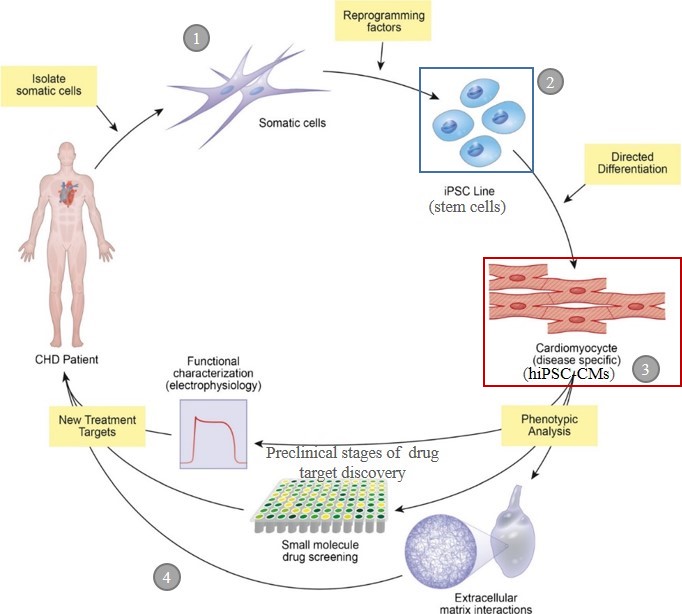 Most importantly these clinical studies in CHD uncovered patient-specific, molecular target pathways for potential therapeutic strategies in personalized and precision cardiovascular medicine14,15. Unlike human embryonic stem cells derived from blastocysts or fertilized eggs, the iPSC technology offers an experimental approach that lacks the ethical concern of cellular origin, by reprogramming mature somatic cells to induced pluripotency, for stem-cell-based models of CHD7,19. However, by definition, this technology is not applicable to stem-cell-based research avenues studying early human development, vaccine development and viral disease mechanisms20. A setback to the original iPSC protocol was when the process of reprogramming shared common events with carcinogenesis as observed in iPSC derived from experimental animal models, thereafter replaced with modern alternatives19 .

The in-lab stem-cell-based CHD modeling systems are yet far from ideal, as they are limited by complex inheritance gene dosage effects, phenotypic variations of CHD and intricate development processes of the embryonic heart4,18. While at present it isn't possible to accurately model the entire complexity of interactions at the molecular and cellular level in the lab, the system does allow dissection of some processes for an accurate glimpse to pathophysiological mechanisms and complements existing approaches using animal models, to collaboratively address mechanisms in CHD4,10. The technology is regularly optimized to form a universal protocol for large-scale, reproducible and efficient clinical-grade cell production, with hopes for commercialization in clinical, pharmaceutical, tissue engineering and in vitro organ development applications21,22 (Figure 3). Further advances in iPSC technology have found notable recent applications in regenerative medicine; including 1) integration of CMs on a native cardiac extra cellular matrix (ECM) scaffold, to bioengineer a functional human heart with electrical conductivity and metabolic function, in the lab23 and 2) the generation of epicardial cells (cells of external heart surface) under controlled conditions in-lab, with ability to invade and regenerate cells of the myocardium in an infarcted mouse model (in vivo)24. 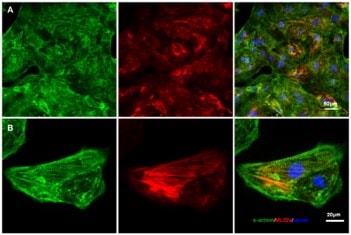 Many biomedical research efforts in the past have accumulated to realize present advancements in cardiac cell therapy. Ongoing research on congenital heart disease with stem cells and animal models will be vital to understand disease mechanisms, develop therapeutic drugs targeting those pathways to reverse CHD progression and ensure healthy heart development for improved quality of life25.