The virtual physiology of the human artery

From virtual lab to clinical bedside: proposal to develop a multiscale computational model of the virtual human artery and evaluate pathophysiology prior to clinical intervention.

Cardiovascular diseases remain the predominant cause of death worldwide, with recent reports projecting heart failure to increase dramatically in the next few years. In contrast to previous articles on laboratory bench-work, this post is on experiments conducted with computer-aided simulations in ‘virtual labs’ to address patient-specific cardiovascular disease. The virtual procedures primarily aim to evaluate pathophysiological mechanisms contributing to disorders of the cardiovascular system and facilitate accurate early clinical intervention. 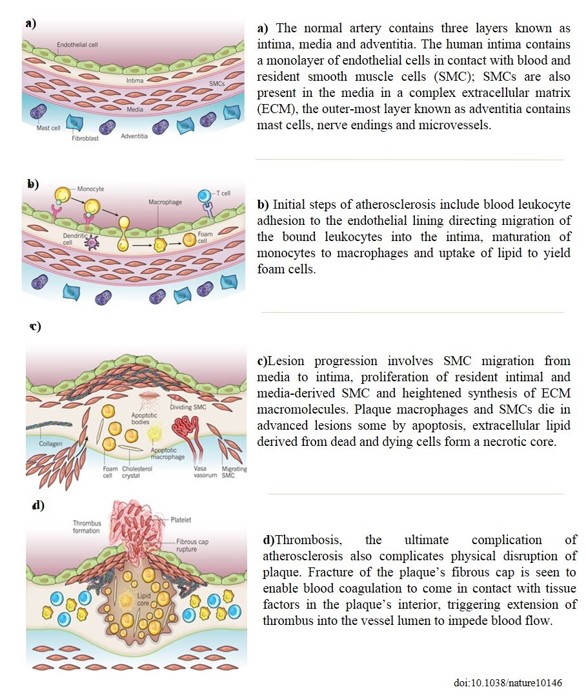 The deployment of a stent (a mechanical scaffold)4, serves as a non-invasive clinical intervention procedure to restore stenosed (narrowed) artery to its original dimensions (Video 1). However, restenosis (re-narrowing) and thrombosis occur post-stenting to cause further clinical complications5. Drug-eluting stents (DES) were developed to actively inhibit smooth muscle cell (SMC) hyperproliferation responsible for re-narrowing artery (restenosis)6, and dual antiplatelet therapy (DAPT) was established on a case-by-case basis post-stenting to prevent thrombosis7,8. However, these medical interventions are not definite solutions and require regular optimization.

Similar to atherosclerosis, aneurysms are another major vascular disorder, mainly located in the abdominal aorta, thoracic aorta and vessels of the brain9. In all vascular disease mechanisms and their clinical intervention procedures, an intricate play exists between pulsating blood pressure and shear stresses exerted on the arterial wall, resulting in adverse biological responses3.

Hemodynamics is therefore a major field of study, due to its essential role in healthy vessel maintenance and arterial disease development. Since accurate measurement of in-patient (in vivo) blood-flow is arduous even with advanced medical imaging systems, computational hemodynamics takes precedence as a research tool to understand in vivo biological processes3. Many studies have been conducted by modelling arterial (patho)physiology to understand hemodynamics in vascular disease with computational assumptions made on the physics of blood rheology3. A few simulations are listed below (table 1).

The physics-based models3 listed in table 1 were created using patient-specific medical images, while the modelling systems detailed next aim to include both biology and chemistry to more accurately represent pathophysiology of arterial disease3. For example, in-stent restenosis (ISR) is a clinical complication that occurs when smooth muscle cells (SMC) proliferate and form neointima (thickened artery) as part of an adverse biological response to mechanical stress exerted by the stent (Figure 2 A). The multiscience and multiscale nature of ISR after drug eluting stent (DES) implantation was modeled by a paradigm known as complex automata (CxA) that combined three different subprocesses operating on different time scales: 1) hemodynamics (blood flow), 2) Cell cycle dynamics of SMC (growth/apoptosis) and 3) drug diffusion mechanisms of the stent (Figure 2B). Preliminary results show that the subsequent two-dimensional model accurately reproduced tissue geometry and stent dimensions in agreement to those observed experimentally in vivo (Figure 3), facilitating hypothetical tests to comprehensively study ISR in-lab17. To evaluate realistic stent designs, however, it is necessary to run three-dimensional simulations3. Computational paradigms here are referenced from17 and highly simplified for brevity.

Further algorithms can be included to model processes such as thrombus formation, endothelial loss and regrowth, in three-dimensions for a more realistic domain 18. The proposed next step forward in this research is to couple cell and molecular level physiological simulations across time scales, to create a multiscale model representing healthy and pathological arteries in their entirety (Figure 4)3.

Figure 4: Proposed virtual artery: a combination of models on several scales make up the virtual artery. These include whole-body one-dimensional models, three-dimensional fully resolved hemodynamics and cell-based models of blood, arterial wall and intracellular response to understand interaction between stent-artery (Figure modified and reproduced from reference3)

The projected vision will couple physiological components simulated over the years, including; 1) whole body models of blood flow19, 2) 3D hemodynamics based on numerical methods20, 3) cellular (Potts) models for arterial wall21, 4) models of tunica media17 and 5) cell based models for blood, platelet aggregation and clot formation22, in a multiscale model to form the composite virtual artery3. The proposal will rely on the multiscale modelling and simulation framework (MMSF), based on the concept of CxA3. Completion of the project will be a community-wide effort, to build the virtual artery in alignment to the Virtual Physiological Human (VPH) initiative. The virtual artery is expected to have a strong impact on clinical cardiology, enabling early treatment/intervention with greater accuracy23. Key limitations of the technique include computational issues related to simulations both conceptually and in practice3. For instance, some scale-bridging methods such as 1) coupling cell-based blood flow models to 3-D continuous fluid models and 2) coupling cell-based models of arterial wall to continuous solid mechanical models, are not well developed nor yet existent3. The multiscale simulations also require high-performance computing at petascale, to simulate hierarchies of physical processes3. Emerging exascale supercomputers in development by the ComPat project aim to lift such limitations 24.

The proposed virtual artery is a multiscale model of physiology that aims to bridge the gap between physics, chemistry and biology creating a powerful paradigm for the treatment of cardiovascular disease. The research will facilitate exciting possibilities, including combined evaluation of hemodynamics, biochemical and cellular interactions at the artery wall. In future, the virtual human artery will enable accurate early diagnosis of vascular disease and predict outcomes of planned clinical interventions such as stent implantation, in advance, to minimize risk and improve patient health.