As efforts to develop vaccines against the Zika virus (ZIKV) continue apace, Drew Weissman and colleagues from the University of Pennsylvania reported an mRNA vaccine that induced long-term protection against the virus in mice and macaques after a single immunization. The vaccine, based on nucleoside-modified mRNA encoding a ZIKV glycoprotein (preM-E) enveloped in lipid nanoparticles, induced antigen-specific neutralizing antibodies and primed T cell immunity, effectively generating a memory immune response that protected against infection with the virus (Figure 1). 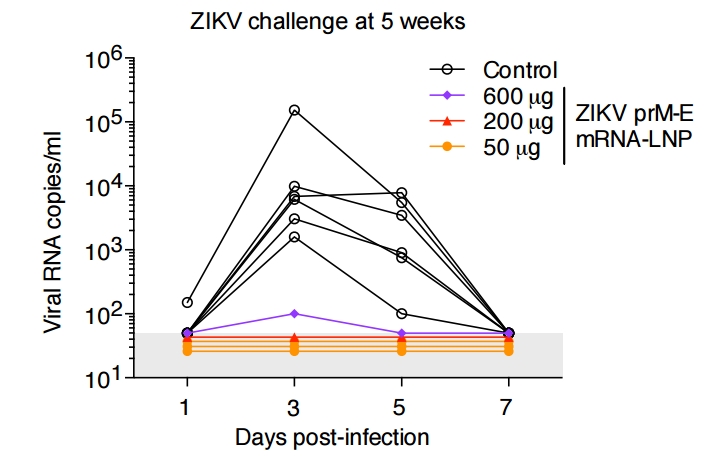 mRNA vaccines work differently from classical vaccines. Typical vaccination strategies involve the administration of microbial antigens in the context of immune activation signals (adjuvants). These antigens are engulfed and processed by antigen-presenting cells, and presented to T and B cells to trigger antigen-specific immunity (for example, through antibody production, differentiation of memory T cells or expansion of cytotoxic T cells). Despite being efficacious and having good safety profiles in providing protection against many infectious agents, several infections (e.g. HIV) have proved difficult to tackle by vaccines, raising the need for more efficient immunization methods.

In the search for new ways to generate immunity to infectious pathogens, nucleic acid vaccines based on RNA or DNA formulations have emerged as a new class of immunization therapies (a DNA vaccine that induced protection against ZIKV in mice was reported last year). Instead of an injection of antigens, mRNA vaccines are based on the delivery of mRNA molecules encoding a peptide antigen of interest (such as a membrane protein of a pathogen; Figure 2) to antigen-presenting cells to induce in situ expression of the antigen. Once inside the cell, the mRNA strand is translated, and the antigen is expressed and presented on major histocompatibility complexes at the cellular membrane to activate antigen-specific T and B cells. This strategy increases the availability of the antigen in antigen-presenting cells while bypassing the systemic activation of the immune system with strong antigens, which can have adverse effects.

One downside of mRNA vaccines (and indeed of all mRNA-based therapies) is the fact that RNA itself is immunogenic. RNA sensors, part of natural viral recognition pathways, detect and react to circulating RNAs by inducing inflammation and RNA degradation, while simultaneously slowing down translation and mRNA replication. For this reason, one of the main research avenues in RNA therapeutics has been the engineering of efficient delivery systems and molecular strategies to mask RNA from host RNA receptors. In this context, nanoparticles that ensure intracellular delivery of mRNA are a crucial tool for potential mRNA vaccines; similarly, chemical modifications that render RNA ‘invisible’ to innate immunity receptors, such as nucleoside modifications, have enabled the ‘silent’ delivery of coding mRNA molecules to target cells for optimal translation.

The usefulness of mRNA vaccines is not limited to infectious diseases; for example, this strategy has been used to induce immune responses to cancer-specific antigens or neoantigens.