Imaging atherosclerosis from the inside

A multimodal platform for research, diagnosis, prognosis, and image-guided local therapy in atherosclerosis and cardiovascular disease.

Atherosclerosis is the #1 killer in western civilization and a leading cause of disability. This insidious disease often manifests itself for the first time, and generally without warning, as a life-threatening heart attack or a disabling stroke. As a neurosurgery resident, I have seen the latter on a daily basis. When stroke strikes, healthy and productive people become critically ill in a matter of minutes. And among the ‘lucky’ survivors, many are left on a life-long path of disability. That is not all though; for every 10 patients that suffered a stroke, we are unable to pinpoint the underlying reason for the disease in 3 or 4 of them, despite our best efforts and a myriad of diagnostic tests (including fairly invasive procedures, such us a brain biopsy). The uncertainty of how exactly the stroke happened is quite distressful for patients, family and the medical team as a whole. Many times we may have a suspicion of what happens: the patient has a ruptured atherosclerotic plaque in the carotid artery (which is actually one of the most common known reasons of stroke) that is forming clots that break and travel upstream, occluding vessels in the brain. However, seeing ‘smoking gun’ lesions in the arteries is difficult with the available technologies. The majority of tools that we use in the hospital provide great pictures of the vascular lumen, but have many limitations when uncovering subtle thrombogenic lesions (such as shallow ulcers and erosions) in the arterial surfaces, and many culprit plaques are wrongly labeled as innocent bystanders. Such miss-diagnoses preclude patients from appropriate and targeted treatment, which translates in unnecessary and unrevealing tests and a loss of opportunities to prevent future strokes. In summary, there is unmet clinical need for better technologies to see at-risk (that is, vulnerable) arterial surfaces before symptoms (re)-occur and to identify those concealed lesions missed by conventional diagnostic tests in cases of stroke of “unknown reasons”.

I was very fortunate to join Dr. Thomas Wang’s team at the University of Michigan, a well established laboratory of molecular imaging that few years ago was pioneering the use of an ultrathin high-resolution spectral endoscopic technology for early detection of cancer in the gastrointestinal tract. This technology, known as scanning fiber endoscopy (SFE), was actually invented and developed by Dr. Eric Seibel at the University of Washington, and consisted of a single optical fiber scanned by a piezoelectric actuator that illuminates tissue with multiple laser beams. Then, light reflectance and fluorescence emission are digitally reconstructed with high resolution and large fields of view. On the basis of the unprecedented resolution offered by this very small and highly flexible endoscope (Figure 1), combined with the capability to generate laser-based multimodal imaging, it was clear in my mind that this technology could make a major impact in improving the understanding, diagnosis, and treatment of cardiovascular disease, if adapted and deployed within arteries and veins. 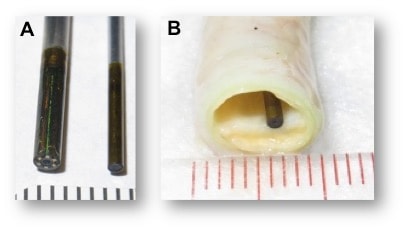 Figure 1 | Scanning fiber angioscopes can have an outer diameter of 2.1 mm (left in A) or 1.2 mm (right in A), and are introduced within arteries (B).

With the quest of developing a novel platform for multimodal high-resolution structural, biochemical, and biological vascular imaging, a team of neurosurgeons, neurologists, pathologists, engineers, computational scientists, biochemists, experts in translational animal models, molecular biologists, and biomedical engineers, from both the University of Michigan and the University of Washington, joined forces to conduct this research.

The first question was whether the SFE, designed to detect the earliest stages of cancer, would be able to be adapted and used to generate images of the vascular surfaces, and how normal and diseased arteries would look like with high-resolution spectral angioscopy. To answer this question, Dr. Seibel’s team in Seattle developed a fluorescent SFE system with red, blue and green laser beams mounted in 1.2mm and 2.1mm endoscopes. Then, we used this SFE system at the University of Michigan to image cadaveric human arteries. We focused on optimizing acquisition settings, generating descriptive qualitative features and surface patterns, and then matching angioscopic findings to histological analysis. We also tested this imaging system in an animal model by transitorily interrupting blood flow and obtaining a clear field of view.

Once we had a good understanding of the different angioscopic patterns of normal and abnormal endoluminal anatomy, and were able to differentiate complicated from non-complicated atherosclerotic plaques with a high grade of certainty, we decided to explore the possibility of employing differences in tissue autofluorescence as a means of dissecting the biochemical makeup of plaques. To this end, we analyzed the fluorescent spectra of the major structural constituents of normal arteries and atherosclerotic plaques with lasers in the blue and green wavelength, and corroborated the finding with confocal microscopy of unstained tissue sections. We then used this information to co-generate label-free biochemical contrast derived from arterial autofluorescence with structural images of the SFE (Figure 2), and derived a multimodal classifier capable of categorizing the full spectrum of atherosclerotic lesions according to the histopathological classification of the American Heart Association (AHA). 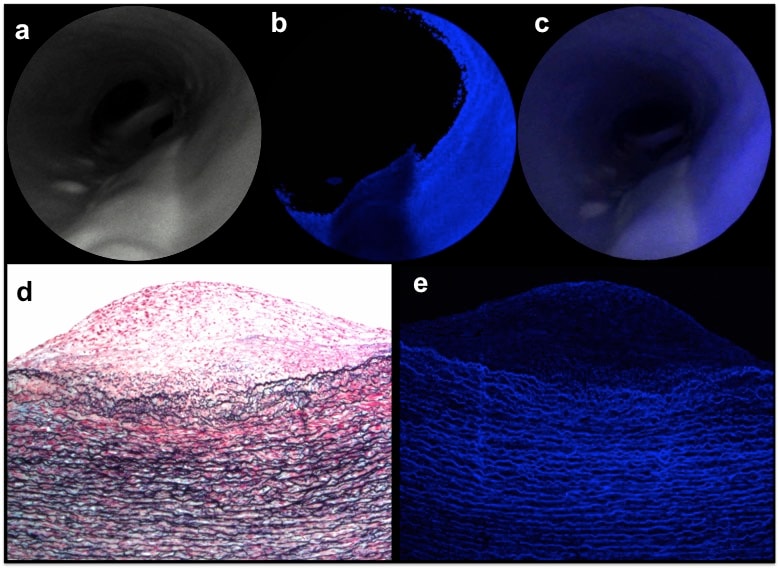 Figure 2 | Scanning fiber angioscopic images with red reflectance for structural images (a), blue fluorescence for label-free biochemical contrast (b), and multimodal overlapped image (c). Histology showed an intermediate atherosclerotic plaque rich in macrophages (d), with very low fluorescence in the blue spectrum in comparison to the elastin in the tunica media, as shown in confocal microscopy (e).


By doing these experiments in cadaveric specimens, we had a ‘stroke of good fortune’: we analyzed a carotid artery obtained from a patient with a history of recurrent cryptogenic strokes. These strokes always happened in the same territory, suggesting that the source of the clots was the carotid artery supplying this part of the brain (and not the heart, that tends to affect both sides of the brain overall equally). To our surprise, in this specimen we found at the carotid bifurcation an extensive but shallow ulcer (“smoking gun”) that was not identified by conventional imaging modalities (Figure 3). This finding supported the concept that high-definition angioscopy enables detection of subtle thrombogenic lesions in sub-stenotic atherosclerotic plaques, and invigorated the ongoing efforts to translate this approach to clinical settings.

Figure 3 | Scanning fiber angioscopy of the carotid-artery bifurcation of a donor with a history of stroke of 'unknown cause' revealed an ulcerated plaque on structural images (a) with a 'salt-and-pepper pattern' in fluorescence mode (b,c). Pseudocolor map of fluorescent intensity in (b), resulting from exposed necrotic material to the arterial lumen as showed by histology (c).

Our research also aimed at identifying silent but vulnerable arterial surfaces to enable timely treatment and hopefully prevent cardiovascular events. In this regard, significant efforts have been conducted in the last decade to translate new pathological insights into imaging approaches for the evaluation of plaque vulnerability on the basis of biological activity. However, this task has proven to be extremely challenging, as it requires molecular probes that target key players in plaque-rupture pathogenesis, as well as powerful diagnostic instruments to detect their signal. We proceeded to analyze the capability of SFE to detect a molecular probe targeting fibrous-cap degradation, which is a key player in plaque-rupture pathogenesis. To this end, we elected to expose specimens from carotid artery endarterectomy (that is, plaques removed from the carotid arteries of patients that suffered a stroke) to matrix metalloproteinases — activatable probes labeled with a red fluorescent dye (because of the very low red autofluorescence of atherosclerosis lesions, these lead to a high signal-to-background ratio). By doing this, we proved the concept that SFE was able to reliably detect the fluorescent signal from the activated probe, and that the high spatial resolution could provide key information about the geographical distribution of biological markers between plaques and within the same plaque. Research in this area is currently being conducted both in human cadaveric tissue and in a translational in vivo animal model to improve image-based risk stratification for carotid disease.

It is our hope that high-definition multimodal SFA will become a new platform for research, diagnosis, prognosis, and image-guided local therapy in atherosclerosis and cardiovascular disease. This flourishing area of endovascular neurosurgery, which interfaces with the departments of engineering, cardiovascular biology, and molecular sciences, represents an exciting new domain that will lead to increased diversity in the field, and to enhanced understanding of the scope and breadth of vascular disease. 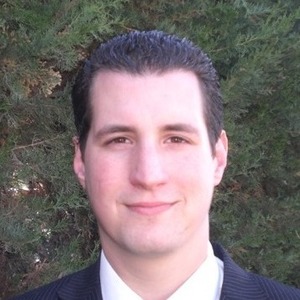