In Dr. Heller’s lab, I became interested in the clinical application of a property of carbon nanotubes that I wasn’t even aware existed: an intrinsic fluorescence in the near-infrared spectral region [1]. This fluorescence does not photobleach, as most fluorescent molecules do, and the intensity and wavelength of the fluorescence is very sensitive to molecules near the nanotube’s surface. And certainly interesting from a biomedical engineering standpoint, this wavelength of light is ideal for maximally penetrating tissue, opening exciting possibilities for measurements through living tissue in humans, such as an implantable sensor [2,3].

Over the past few years, short strands of DNA [4] and RNA [5] that can be found in different biological fluids have been intensely studied as promising biomarkers, especially for diseases such as cancer. We identified microRNA (miRNA) as particularly interesting for this type of application [5]. With this in mind, we intended to design a sensor that would reliably produce a signal upon binding a target oligonucleotide and retain versatility to be programmed to detect any sequence. With the diverse expertise of the Heller lab team, we built spectroscopic instruments and analysis schemes for rapid testing, and I was eventually able to design a sensor that would respond specifically to a target oligonucleotide sequence.

Upon binding a miRNA, the sensor responded specifically to the target sequence via a small blue shift in the nanotube emission band. Although we were happy with the selectivity of the sensor, we were disappointed with the relatively small optical response that the sensor produced upon binding. So we sought to better understand how changes on the nanotube surface led to the change in emission. Working with great collaborators at Lehigh University, Dr. Jeetain Mittal and his team, we found that molecular dynamics simulations could help us to understand the factors at play. 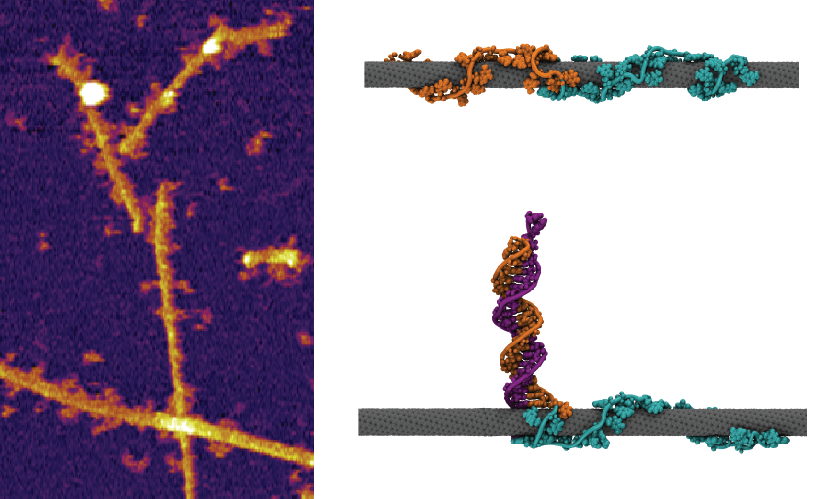 Armed with the insight gained through the simulations, we hypothesized that we could improve the sensing response via addition of an amphiphilic molecule to bind to the newly freed nanotube surface and remove water, and thereby enhance the blue shift. Upon screening candidates, we found a surfactant [6] that could be used to achieve a large enhancement in sensor response to hybridization.

The pace of the project rapidly picked up and we moved forward in characterizing the system. We set out to assess the clinical applicability of the technology both for in vitro measurements in biofluids and as an implantable sensor that can be interrogated non-invasively. In two common biofluids, serum and urine, we were able to directly detect oligonucleotides without purification and with minimal pre-treatment. We then implanted the nanotubes, protected by a semipermeable membrane, into a mouse’s belly cavity, and then we injected target miRNA. By simply shining light at the mouse’s belly and recording the emitted light (Fig. 2, left), we found that the wavelength of the nanotubes changed in response to the RNA. We found that we could detect this molecule in live mice by using nothing more than light; it was as easy as reading a barcode.

We envision a future where a small device containing the nanotubes can be implanted (or injected) in a patient and continuously monitored with an external light source, allowing for the early detection of diseases. The light source and detector could perhaps be worn [7,8] (Fig. 2, right), and the data could be wirelessly transmitted and analyzed [9].

Figure 2: (Left) Non-invasive miRNA measurement via the implanted sensor upon excitation with red light. (Right) Example of a wearable medical device for continuous monitoring of motion (image taken from Mukhopadhyay [8]). 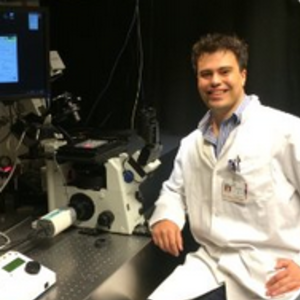