High-throughput delivery into the cell nucleus

New technologies will have impact when they solve real problems. After a PhD and training in microfluidics from The Pennsylvania State University, I was highly motivated to join the labs of Profs. Klavs Jensen and Robert Langer, who challenged me to a project: high-performance gene delivery mediated by cell squeezing. The cell-squeezing technique [1] had demonstrated delivery of a variety of molecules into the cell cytosol, yet DNA expression remained a challenge. By combining mechanical cell squeezing and pulsed electrical fields, we aimed to develop a cell-membrane disruption and field-enhanced delivery system (DFE) for gene delivery.

In the DFE hybrid system, cell squeezing disrupts the cell membrane and subsequent application of an electric field drives DNA into the cytosol and ultimately the nucleus. We solved many technical challenges in this project. For example, cell squeezing has multiple interdependent parameters for delivery, such as cell speed, constriction geometry and buffer composition, which needed to be investigated in concert with the electric-field parameters. Moreover, the sequence of events was important, as cell squeezing followed by an electric field yielded strong results whereas reversing the order resulted in low viability and low gene transfection. The electric field also had to be pulsed and optimized to avoid bubble generation and to protect the electrodes from degradation.

After grappling with the aforementioned complexities, we found conditions with high DNA expression. Surprisingly, the expression was also much faster than achieved with traditional electroporation and lipid-nanoparticle systems, which usually rely on delayed trafficking and internal processing of the DNA. This fast DNA expression suggested direct delivery to the nucleus by DFE. To confirm this, we performed imaging using fluorescently labeled DNA and found that after DFE, DNA was located in the nucleus within minutes post-delivery.

Immediate delivery of DNA to the nucleus suggested that the nuclear envelope was disrupted. To investigate our hypothesis, we imaged CHMP4B-GFP, a reporter for plasma and nuclear-membrane repair. The presence of CHMP4B-GFP foci indicated active membrane repair. Imaging the foci made it feasible to compare the magnitude and dynamics of disruption and repair for different treatments. We found that only DFE efficiently disrupted the nuclear envelope, indicating that rapid DNA-plasmid delivery occurred through these disruptions.

Figure 1 | A schematic of the DFE device, with cells being squeezed and then subjected to an electric shock. Image courtesy of Alexander Tokarev.

The project involved a team effort that lasted from 2 to 3 years. While Armon and Klavs originally came up with the concept of combining cell squeezing with an electric field, Xiaoyun led the project design, device fabrication, and experimental operation. He brought the concept into reality. Martin was critical in guiding experimental strategy and mechanistic studies, especially the CHMP4B-GFP experiments to monitor nuclear envelope and plasma-membrane integrity. Having a diverse interdisciplinary team was a critical aspect of making this project a success.

As the first demonstration of nuclear delivery at high throughput, these results have generated much excitement. Future work will focus on better understanding how different parameters influence the system and how to best translate the technology to patient-derived cells. Further developments on T cells and hematopoietic stem cells, for example, could dramatically improve the feasibility of cell-based therapies to treat human disease. Ultimately, translation of this technology to an industrial setting with a focused drive towards clinical translation would maximize its potential for success. 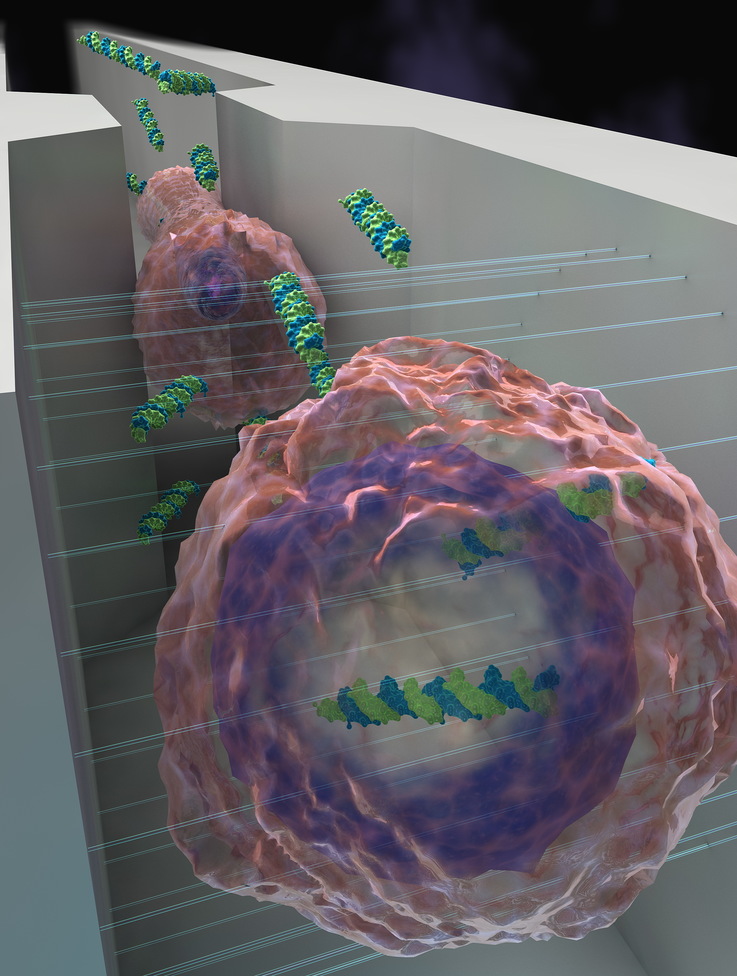 High-throughput delivery into the cell nucleus