Cellular biomechanics of the human artery

Arterial stiffening is a common biological phenomenon observed with old age and during progressive cardiovascular disease. Although biological mechanisms of cells play a pivotal role in arterial stiffening and in the development of cardiovascular disease with age, it remains a relatively unexplored research area. Biomechanics is broadly defined as mechanics applied to biology, with the main objective of deducing the function of a system based on its geometry, material properties and boundary conditions while balancing the laws of mechanics, which include; conservation of mass, momentum and energy1. The heart (cardio) and blood vessels (vascular) comprise the cardio-vascular (CV) system, where the aorta is a blood vessel and major conduit artery of the human body, providing a low-resistance path for blood to flow from the heart to peripheral organs and tissues2.

In its role, the cardiovascular system primarily circulates blood through capillaries, within diffusion distances of the tissue parenchyma of organs (Figure 1). The obvious mechanical nature of the cardiovascular system was confirmed after William Harvey initially discovered blood circulation in 1615, followed by the discovery of capillary vessels by Marcello Malpighi in 16613. Harvey’s theory of circulation was confirmed when the existence of capillary vessels came to light, completing the vascular circuit to integrate CV physiology and mechanics, for what is now termed cardiovascular biomechanics3. 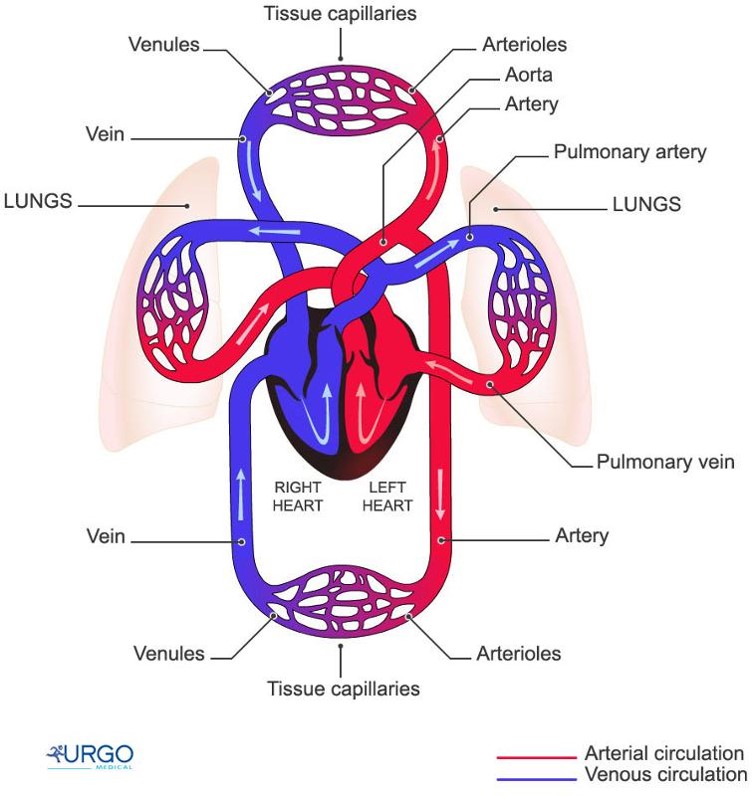 Figure 1: The cardiovascular system illustrated in its role in blood circulation through capillaries to organs. Image obtained from the Boston University School of Public Health.

Mechanically, during systole, the aortic wall stretches to accommodate blood ejected from the left ventricle and during diastole the aortic wall’s elastic recoil enables continued blood flow, while limiting a diastolic drop in blood pressure. This process can also be visualized online, as part of an interactive animation of the cardiac cycle, available via the Library.Med.Utah website. Aside from its role as the major conduit between heart and organs of the human body, the elastic nature of the aortic wall provides a biomechanical “buffering capacity” to “cushion” the cardiac blood flow; known as the Windkessel function. When the arterial wall stiffens due to age, disease or other factors (lifestyle/genes), it leads to the loss of Windkessel properties, altering central hemodynamics with negative impacts on the function of the heart and other organs. This post highlights 1) the clinical significance of arterial stiffness, 2) in vivo and ex-vivo methods used for its assessment and 3) the underlying biological mechanisms, with specific note on techniques available to measure the influence of vascular smooth muscle cells (VSMCs) in arterial stiffness.

Biomechanically, increased systolic arterial pressure (SAP) and decreased diastolic arterial pressure due to arterial stiffness, contribute to an increase in pulse pressure resulting in isolated systolic hypertension, which is a condition commonly observed in the elderly4,2. Overall it appears that arterial stiffening can lead to a variety of medical issues in the elderly (and in the young/middle-aged apparently healthy subjects) as well as in those with pre-existing medical conditions (Table 1). This forebodes the need to establish robust methods for the early detection of arterial stiffness2.

Table 1: Biomechanical alterations and related impairments in humans; the sequence in which arterial stiffness and observed CV impairments occur remain to be substantiated.

It is not well known if increased arterial stiffening precedes or is a consequence of impairments such as atherosclerosis2. For example, studies show that segmented aortic stiffening may trigger aortic remodelling, leading to aortic abdominal aneurysm formation11. Particularly in connective-tissue diseases such as Marfan syndrome, aortic stiffness is elevated predisposing patients to progressive aortic stretching (known as dilatation), necessitating surgical intervention to prevent fatal aortic dissection (tearing of aorta) and death12. While vascular smooth muscle cells (VSMCs) proliferate extremely slowly in healthy mature blood vessels, during pathogenic vascular remodelling they acquire an increased proliferative state. It is assumed that while these cells may contribute to increased aortic stiffness, they may also serve as a crucial protective mechanism against aortic dissection, suggesting a need to establish biomechanical studies of VSMCs, to substantiate the findings of molecular biology13.

Structurally, the artery has 3 key layers; 1) the intima (inner layer), 2) media (middle) and 3) adventitia (outer layer) (Figure 2 a). Notably, a layer of cells collectively known as the endothelium lines the intima or the inner wall of the artery to ensure blood flows without thrombus (clot) formation to create an anti-thrombotic surface1. The overall elasticity of the artery ensures its compliance and physiologically, achieved by the presence of elastic layers (elastic lamina) between each of the 3 arterial layers. The vascular wall undergoes remodelling to accommodate for changes in stress levels in relation to variations of blood flow, altering arterial stiffness and compliance. In the clinical setting, arterial stiffness is assessed via several non-invasive methods14. Clinically, the gold-standard parameter of arterial stiffness measurement is the pulse wave velocity (PWV) in the carotid-femoral region (Figure 2 b)1,2,15. The speed of a pressure wave propagating down a blood vessel is represented by the PWV in direct correlation to the vessel’s resistance to non-permanent elastic deformation (elastic modulus); therefore higher PWV indicates greater arterial stiffening1,2. Stiffening processes that occur in segments, as observed with abdominal aortic aneurysm formation can be locally monitored via ultrasound scanning or magnetic resonance imaging16. 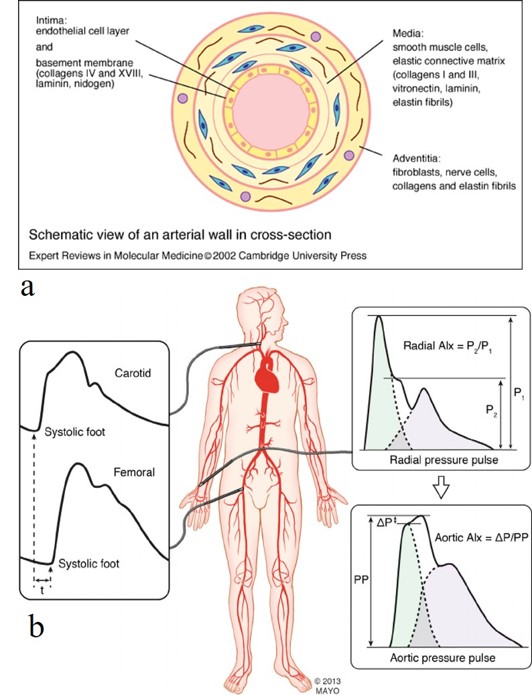 Reliable methods to quantify arterial biomechanics can be implemented with popular mouse (murine) models, as they are already used to investigate a variety of other cardiovascular pathologies2. Using a variety of methods, arterial stiffness can be measured as pulse wave velocity (PWV) or local arterial compliance in vivo, in these models (Table 2). However, biomechanical properties thus evaluated are still an indirect assessment2. In contrast, ex vivo experiments (those which take place on tissue/cells isolated from an organism, outside of the organism) allow for more comprehensive biomechanical testing. Ex vivo experiments too can be conducted via a variety of protocols (Table 2).

It remains to be determined if changes in smooth muscle cell stiffness measured in the lab with aforementioned methods under physiological conditions would directly correlate to changes in the vessel stiffness observed biologically12. Many biological mechanisms exist to influence vessel remodelling in response to hypertension, diabetes mellitus and ageing2. In particular, the role of vascular smooth muscle cells (VSMCs) is investigated extensively, as it is a biological mechanism common to arterial stiffening18,21,24. For instance, in two separate studies conducted using aging primates (monkeys) and spontaneously hypertensive rats (SHR) with increased aortic stiffness - increased smooth muscle cell stiffness was commonly observed in cells isolated from both study models, as measured via atomic force microscopy (AFM)25.

A major limitation to investigating the independent impact of VSMC stiffness in arterial stiffness has largely been technical. Several studies have used a specialized type of nanotechnology known as atomic force microscopy or AFM, where the AFM probe creates a nano-indent on the cell surface to measure the cell’s elastic modulus (Figure 3a)26. The increased stiffness is accompanied by observable changes in the cell cytoskeleton of old vs. young cells (Figure 3b)25. Of note, VSMC stiffness was further observed to be a dynamic property that oscillated in time, with alterations recorded for old vs. young animal models (Figure 3c).

Figure 3: a) a nano-indent made on a cell surface with an atomic force microscope probe, to obtain images and cell stiffness measurements b) images represent actin-filament of the cell cytoskeleton in the VSMCs of old primates compared to the young primates, displaying extensive cytoskeleton changes. c) The dynamic oscillation data can be processed to separate amplitude, frequency and phase components, on a cell-by-cell basis, the averaged data for elastic modulus of old vs. young VSMCs show distinct differences. Figures modified from reference25,26.

The technical improvements made to AFM, employed in these studies and the concept of quantifying independent biomechanics of vascular smooth muscle cells (VSMCs) relative to arterial stiffness, are relatively novel concepts25. The research detailed here represents new potential mechanisms at their early stage of investigation, in need of further expansion via improved methods in cellular biomechanics, to fully understand the impact on arterial stiffness in aging and cardiovascular disease. Simulation-based computational modelling at the cellular level of the artery, as detailed previously may assist further investigations, while even more recent developments of 3-Dimensional machine learning-based cell modelling, made available via allen.cell.org may potentially provide a fundamental research tool to investigate cell biomechanics with greater accuracy in live-cell imaging (Figure 4). The Allen Cell Explorer project, is a growing library of induced pluripotent stem cells, fluorescently labelled at the level of the genes with CRISPR-Cas9 gene editing technology. As a recent Nature news article elaborates, the algorithm can be advanced to recognize gene alterations, for example it is possible to delete a gene related to a specific disease in one of the stem cells and see how the mutation will affect the cell structure using the Cell Explorer's predictive function. For instance, a gene responsible for cell stiffening12 --Transforming Growth Factor β (TGFβ), can be deleted and its effect on the cytoskeleton visualized in 3D at a cellular level with higher precision using the deep learning algorithm. This could biomechanically validate the molecular biology study conducted in mice with disrupted TGFβ, detailed in reference13. The 3D interactive tool based on the machine learning capacity will go live later this year, and in the coming months the site will be updated with distinct cell types such as heart and kidney cells. Moreover, at present, as detailed in context, the role of cellular biomechanics in arterial stiffness is an exciting niche that remains to be explored.