The development of well-designed biological substitutes in human healthcare, with the overarching goal to adequately replace the loss/functional failure of an organ or tissue is known as regenerative medicine. Bioinspired reconstruction of natural tissue/organ structures that usually form during gradual human development, is an obvious interdisciplinary challenge. Tissue engineering, broadly combines the principles of life sciences, synthetic chemistry, materials science, physics, medicine and engineering, to develop materials and create functional substitutes, for tissue or organ replacement and therapeutic drug delivery. Based on the desired outcome/expected biological behaviour, varieties of tissue engineering approaches exist (Figure 1).

In a predominant approach to create organs for implantation, a scaffold or structural framework resembling native biology was formed to which biological cells adhered; this was achieved via cell-seeding de-cellularized tissues to construct lung1, liver2 and heart3,4 organs. Recent advances in tissue engineering include; scaffold-less organ bioprinting based on principles of self-assembly inspired by early human development5, three-dimensional printing strategies (acellular/cell-based bioprinting)6, recently developed bio-integrated robots in-part based on 3D printing7, self-assembly of micron-scale materials/molecules to create macrostructures8,9, and hydrogel-based10 or non-hydrogel-based11 therapeutic initiatives (Figure 1).

Figure 1: Ongoing strategies in tissue engineering for regenerative medicine with a few notable interconnections (green arrows), the focus in context is on hydrogel/microgels (blue) that contribute to organ, tissue and drug development.

Current strategies for tissue and organ development can either mimic native biology (reverse-engineering)2,3 or instill capacity for non-natural functional behaviours (forward-engineering)7. As a whole, cross-disciplinary approaches commonly contribute to synthetically recapitulate native architecture or fabricate biocompatible carriers for drug delivery. This post is a brief update on engineering strategies for hydrogel microfabrication; a biomaterial with a dual role in both organ re-construction and therapeutics development, in regenerative medicine.

The self-assembly of smaller molecules to build a three dimensional construct is “bottom-up” tissue engineering, while scaffold/mold-based cell-seeding is a “top-down” approach8,12. A classic example of bottom-up engineering is when self-assembling molecules form nanoscale structures, to then form macroscale gels8 (Figure 2A). On the same note, amphiphilic molecules have self-assembled to form micelles, vesicles and hydrogels while encapsulating pharmaceuticals in the form of small molecules, peptides and DNA for controlled delivery, with a variety of currently existing commercial applications9 (Figure 2B). 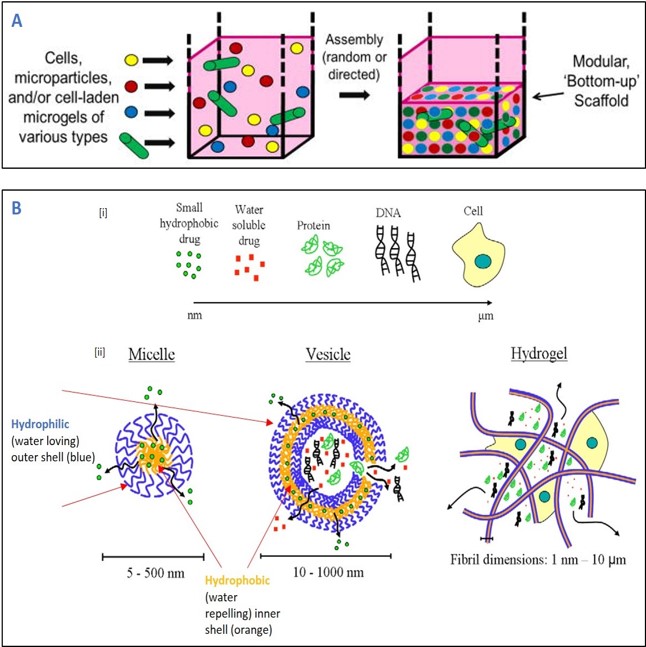 However, such delivery systems to accommodate cells, protein, antibody therapeutics and small interfering RNA (siRNA) for pharmaceutical applications, are still under development13. In tissue engineering research therefore, a variety of microfabrication approaches based on microfluidics, micromolding and electrospinning techniques specifically exist for hydrogel-based cell encapsulation (table 1)13.

In general, cell-embedded hydrogels for biological applications should meet a few key requirements, which include9,13:

During hydrogel based cell encapsulation, the type of cell encapsulated is also important. Primary cardiomyocytes are more sensitive to their environments based on temperature, shear stress and pH than fibroblasts, making them less compatible with microfluidics methods compared to soft and photolithography based encapsulation13.

In principle, during cell-based hydrogel microfabrication, researchers 1) optimize existing technologies (instead of introducing entirely new methods), 2) account for the sensitivity of living cells and 3) ensure all components are compatible for seamless integration18.

Existing techniques for cell encapsulation within microscale hydrogels generally yield high polymer-to-cell ratios13 while sometimes failing to capture any cells at all, resulting in empty microgel capsules. A recently developed method for hydrogel based cell-encapsulation at the microscale, achieves single cell-encapsulation with over 90% efficiency10. Briefly, a pure population of cell-embedded microgels in biocompatible alginate polymer is produced by starting with cell exposure to a suspension of calcium carbonate nanoparticles that mediate cross-linking, followed by removal of excess nanoparticles from cells prior to their combination with the soluble alginate polymer within a microfluidic device, to generate efficient single-cell encapsulated microgels (highlighted in red, Figure 3). 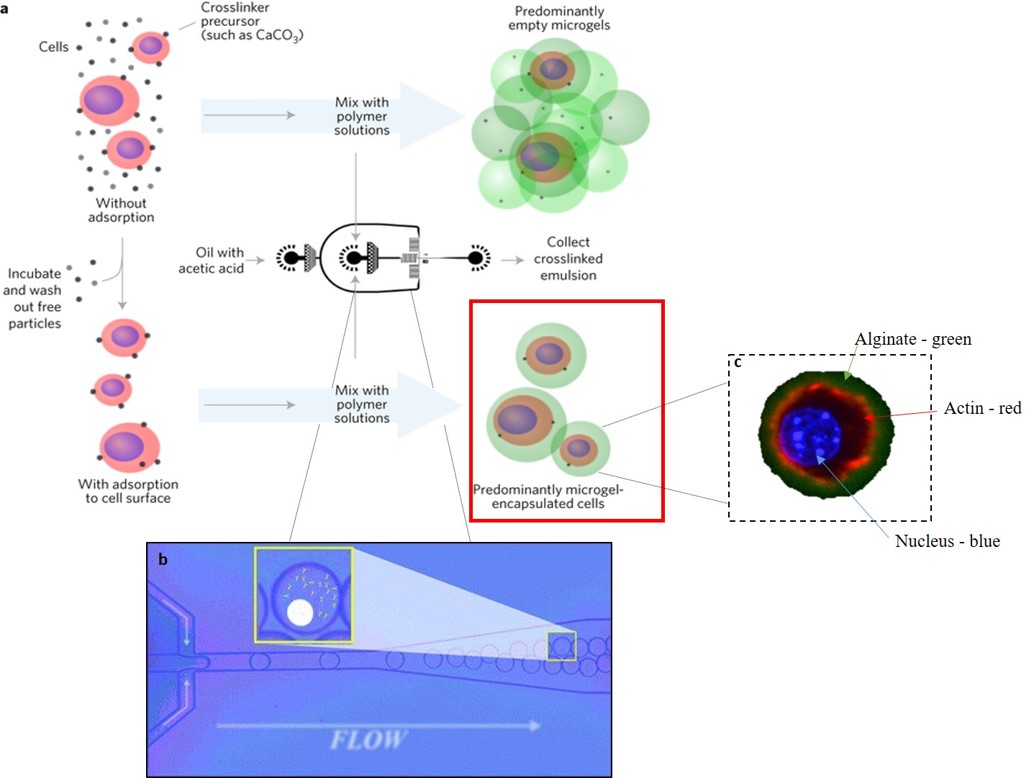 Notably, the new method does not construct a novel prototype for the expected outcome, instead optimizes engineering principles for a practically efficient approach than before, albeit based on pre-existing methods. The unprecedented step here was to remove excess nanoparticles on cells prior to polymer interaction, to ensure complete cell encapsulation. The process is also extremely fast, enabling encapsulation of "one thousand cells per second" inside the device. These cells were viable in culture for up to 3 days and able to retain structural integrity in circulation within a pre-clinical animal model10. The decreased material-to-cell ratio enhanced the ability of encapsulated cells to respond to external stimuli, with potential implications for controlled cellular function of microgel-based single-cell injections in physiological environments.