The chance meeting between diamond and drugs: exploring pharmacology with glass

Development of an analytical system that monitors the pharmacokinetics and pharmacodynamics of systemically administrated drugs in in vivo microenvironments
Genki Ogata
Assistant Professor, Osaka University
Follow
Like Be the first to like this
0

Our project was triggered by a coincidental meeting between Professor Hibino and Professor Einaga in 2011. They happened to sit side by side at a conference and talked about their research expertise. Several minutes later, they agreed to a biomedical collaboration using a needle-type boron-doped diamond (BDD) microsensor. However, at the time they had no ideas for targets of the sensor.

Professor Hibino, who studies inner ear1, is a physiologist and used to work as a clinical otolaryngologist. He has always believed that in order to advance medicine it is crucial to detect vital phenomena in vivo and elucidate the underlying physiological and pathological mechanisms in organisms; and that for this purpose we need to develop innovative technologies through interdisciplinary research. I joined his laboratory because I was deeply impressed by his conviction. Professor Einaga is an engineer and a pioneer in research on diamond electrodes. Before the collaboration, he had already reported using needle-type BDD microsensors for electrochemical measurements of dopamine concentrations in rodent brains and glutathione concentrations in cancer cells2, 3. He was seeking other biomedical applications for the sensor. Professor Hibino and Professor Einaga’s project was ideal for me because I graduated from the School of Technology and had experience with electrophysiological experiments on rat brains.

BDD is a state-of-the-art material that can electrochemically detect a broader array of substances with more stable and rapid responses than those composed of conventional materials such as gold, platinum, and carbon. We used BDD microsensors to test several intrinsic biological factors in live animals. However, each result was unclear or lacked a high impact. I then happened to succeed in measuring a diuretic reagent: bumetanide. This was very lucky for me. To my knowledge, no electrochemical microsensor of any type had been used for the in vivo electrochemical detection of drugs. I was further surprised by Professor Hibino, who told me that, although systemically administered drugs are unevenly distributed in each organ and their concentrations change over time, little is known about local pharmacokinetics because of technical limitations. More importantly, the modulation of cellular and tissue functions--pharmacodynamics--has never been detected simultaneously with drug kinetics in real time. I could not believe that such a key issue had been ignored. Accordingly, we combined a needle-type BDD microsensor to track the drug concentration and a glass microelectrode to track cellular electrical signals. It is noteworthy that the electrical signals are targeted by numerous types of drugs. In addition, our group has excellent skill in recording the signals with glass microelectrodes in vivo4. In this context, we developed a drug-monitoring system for local pharmacokinetics and pharmacodynamics.

In general, the selectivity of electrochemical detection with any materials is insufficient. I found that, in animals, drugs induced relatively clear responses on BDD microsensors after the timing of their administration. Therefore, these exogenous chemical compounds seem to be appropriate targets for investigation. I started in vivo experiments with bumetanide, which can induce deafness as an adverse event, in the guinea pig cochlea (Fig. 1). Unlike in vitro experiments, however, in vivo measurements were extremely difficult. Different noise types that interfered with stable measurement using the BDD microsensor emerged from animals because they were alive. We overcame this problem by repetition and trial and error. In addition, Professor Hibino and I wondered if in vivo quantification of drug detection with BDD microsensors would be a valid approach. Therefore, I collected a small aliquot of the body fluid from the cochlea of each animal as soon as I finished the electrochemical measurement; the sample concentration was determined with mass spectrometry and compared with the value estimated by the BDD microsensor. Eventually, I confirmed that these two lines of experimental results were comparable. In this context, Professor Kusuhara, who is an expert in pharmacology, was brought in. He helped us to perform not only mass spectrometry assays but also calculations for pharmacokinetics. Professor Takai, who is an engineer, assisted us with operating the analytical system. This interdisciplinary work is a crystallization of collaboration among different research fields: medicine, engineering, and pharmacology.

Figure 1. In vivo measurement with our drug-monitoring system

a, Experiment in a guinea pig cochlea. A boron-doped diamond microsensor, a double-barrelled microcapillary containing reference and counter electrodes, and a glass microelectrode were inserted into the cochlea, which is outlined by the dashed line. b, A real-time recording of the change indrug concentration and endocochlear potential (EP), the electrical signal underlying hearing. The animal was vascularly administrated with bumetanide (30 mg kg-1). The bumetanide concentration (far left axis) was calculated using sensor current (SC) and the calibration curve obtained in vitro. This figure is modified from Figure 3c in our paper.

BDD microsensors can be combined with different instruments that measure or visualize biological events. Further improvement of the selectivity and sensitivity for electrochemical detection with the sensors will result in the development of a more powerful and reliable drug monitoring system.

Our technology may contribute to the development of drugs and drug regimens that maximize the efficacy while minimizing  adverse events. It may also be useful for drug repositioning. Using our system to analyse model animals with different degrees of disease severity and drug metabolism may provide information that can advance personalized medical care. I hope that the in vivo local pharmacology that we describe in the present study will bring about innovations in medicine and life science. 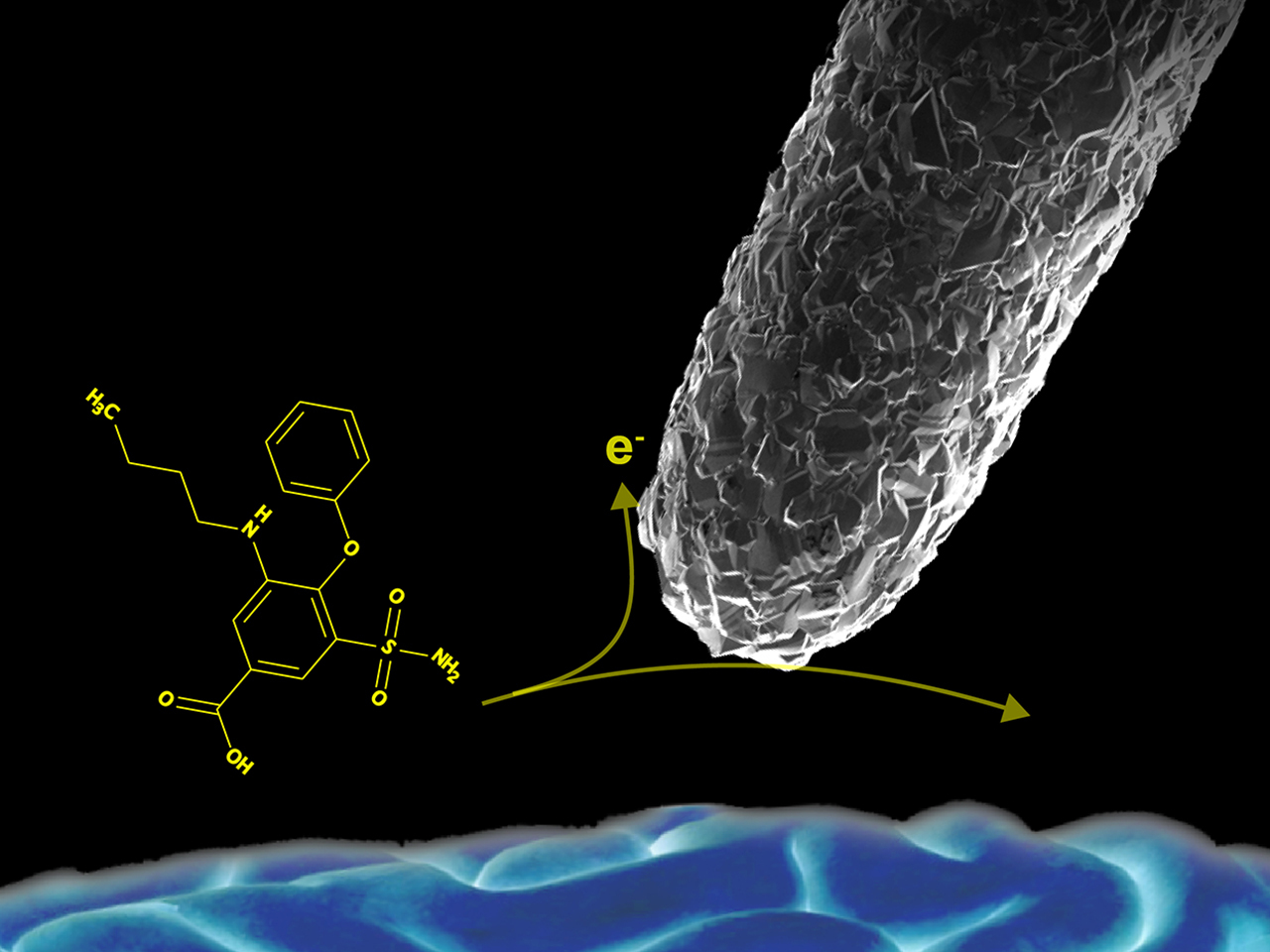 The chance meeting between diamond and drugs: exploring pharmacology with glass