The paper in Nature Biomedical Engineering is here: http://go.nature.com/2Ar4Gqd

Since the first laser was invented over half a century ago, numerous types of lasers have been developed, many which have seen a broad range of biomedical applications. Biolasers are an emerging class of lasers that incorporate biological materials into the gain medium1. Consequently, the laser characteristics such as intensity and threshold can be controlled and modulated biologically. Meanwhile, the laser emission can be used as a sensing signal to detect the minute changes in biological activities occurring inside the laser cavity. Compared to the traditional fluorescence-based detection method, laser-based detection offers distinct features, such as signal amplification, high intensity, high sensitivity, high contrast, narrow linewidth, and unique threshold behavior.

Our biolaser expedition started ten years ago when we achieved a microfluidic laser using a ring resonator as the cavity2, which was inspired by the earlier work of Psaltis and Kristensen and their colleagues3,4. Because of the microfluidic nature, we envisioned that it might be possible to develop a bio-controllable and bio-programmable laser and in turn use the laser emission for biosensing. To date, biolasers for sensing have been extensively demonstrated at the molecular level (e.g., protein and DNA). In addition, lasers controlled by DNA structures and lasing from a single molecular layer were also realized5-7. The gain media include fluorescent proteins, dyes (or quantum dots) attached to biomolecules, vitamins, and fluorescent products via enzymatic reactions.

The first biolaser at the cellular level can be traced back to the Gourley’s work twenty years ago8, in which unlabeled cells act passively inside a Fabry-Perot (FP) cavity. More recently, biolasers based on single cells containing fluorescent proteins have also been achieved9. Tissues, bundles of cells embedded in an extracellular matrix, mimic more closely the actual complex biological environment in a living body and therefore are of more practical significance. The capability to detect and extract laser emissions from a specific tissue and from sub-cellular locations of certain molecular species will have huge potential for biomedical applications. In early 2017, we demonstrated the tissue laser in which two popular dyes, FITC and BODIPY, were used to stain muscle and adipose tissues10. Unfortunately, FITC and BODIPY, as well as fluorescent proteins in the aforementioned cellular laser, do not carry any biofunctions and thus cannot provide biochemical information about biological activities. In our current work, we moved a step forward and used fluorophores specific to nucleic acids and antibody-conjugated fluorophores targeting particular biomarkers to stain the cancer tissues from patients. We further developed a scanning-based “laser emission-based microscope” (LEM) that allowed us to map the lasing emissions from those tissues (Fig. 1). Multiple subcellular lasing emissions from cancer cell nuclei were observed with a low threshold, a sub-micron resolution, and a lasing band of only a few nanometers (inset of Fig. 1). We called those lasing emissions ‘lasing stars’ to indicate their sharpness and high contrast against the background. We found, to our surprise, that cancer tissues have much lower thresholds than normal tissues, which enabled us to identify those cancer tissues by counting the number of cells containing lasing stars. The results match well those obtained from the traditional hematoxylin & eosin (H&E), immunohistochemistry (IHC) and immunofluorescence (IF) methods. Currently we are using the LEM to study various types of cancer tissues for early-stage cancer screening. We envision that the LEM may one day provide an imaging tool complementary to H&E, IHC and IF for better cancer diagnosis and prognosis. 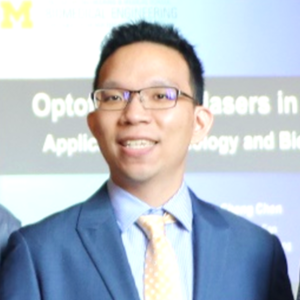