The paper in Nature Biomedical Engineering is here: http://go.nature.com/2yH4oyb

Inspiration from nature and biology often leads to elegant and efficient approaches in engineering, as is the case of neural networks algorithms, artificial photosynthesis, or biomimetic propulsion. When looking at the problem of locating microscale devices inside the body, we noticed that magnetic resonance imaging (MRI) technology has the capability of seeing the inside of living organisms with ~100 μm resolution. Yet, current methods have limited ability to determine the location of microscale devices inside the body with such high resolution. The question we asked ourselves was: if we design microscale devices to behave like nuclear spins, could they be localized, read out, and controlled with MRI-like precision?

The conception of the idea happened at a dinner party, where Prof. Azita Emami and Prof. Mikhail Shapiro were discussing their research interests. As a PhD student in Prof. Emami’s Mixed-mode Integrated Circuits and Systems (MICS) lab, I was thrilled to have the opportunity to work on this project and became involved as soon as Azita and Mikhail first described it to me.  It was fascinating to see how this idea was turning into a concept after every brainstorming session. Addressable transmitters operated as magnetic spins (ATOMS) were born as microscale devices that communicate via RF signals at magnetic-field dependent frequencies, and whose locations could be determined by applying magnetic field gradients and observing their respective frequency shifts (Fig. 1a).

Our approach takes inspiration from MRI, and one of the main challenges was to create a silicon-based architecture that functionally mimics the behavior of nuclear spins in a very small and low power device. After analyzing different options, we proposed an architecture with a three-phase operation: First, the chip measures and stores the local magnetic field. Second, the chip detects the presence of an RF excitation pulse and acquires its frequency. Third, the chip radiates a signal with a shifted frequency proportional to the previously measured magnetic field (Fig. 1b).

Figure 1. ATOMS Concept and operating principle. (a) Addressable transmitters operated as magnetic spins (ATOMS) are microscale devices capable communication at magnetic field-dependent frequencies, and which locations can be discerned by applying a magnetic field gradient. (b) ATOMS operating principle consists of three phases: magnetic phase, where the device measures and stores the applied magnetic field; excitation phase, where it detects the presence of the RF excitation pulse and starts oscillating at the same frequency f0; and transmission phase, where it emits a signal with a shifted frequency proportional to the measured magnetic field. Figure extracted from our paper.

As the project progressed, we realized that because of the uniqueness of our device, there was not a standard procedure for interacting with it. Therefore, no commercially available equipment was ready to interface with it directly. Thus, we started building our own custom interface in parallel with initial bench-top measurements of the device. As the test setup was coming together, we noticed that we were actually building the first ATOMS scanner, which is basically a significant portion of a basic MRI scanner. I clearly remembered the first time we put the scanner and the device together. I got extremely excited when I saw the first results of the electrical characterization of the full system. The chip behaved as expected: measured and recorded the applied magnetic field, wirelessly locked to the RF excitation pulse and acquired its frequency, generated a frequency shift proportional to the measured magnetic field, and transmitted back a signal with the shifted frequency (Fig. 2a). We continued the measurements and revealed a linear relationship between the chip’s oscillation frequency and the applied magnetic field (Fig. 2b), which is exactly how nuclear spins respond to magnetic fields! Because of this similarity, we named this behavior the device’s gyromagnetic ratio γATOMS. Localization experiments in in vitro (Fig. 2c) and in vivo scenarios, conducted with the help of Audrey Lee-Gosselin in the Shapiro Lab, helped us answer our original question by demonstrating sub-millimeter localization of a device smaller than 0.7 mm3.

Figure 2. Measurement results of the ATOMS chip. (a) Frequency response during excitation phase and transmission phase, showing frequency acquisition and frequency encoding (frequency shifts) for three magnetic field magnitudes. (b) Spectral profile at 13 magnetic field strengths, showing the power spectral density (PSD) as a function of frequency. The arrow indicates an increase in the magnetic field BZ. (c) 2-D Localization results of three different experiments where the ATOMS chip was placed at positions to form the letters C, I, T. Color bar indicates intensity. Figure extracted from our paper.

We envision ATOMS technology as a general platform for the development of microscale devices capable of sensing and actuation with precise localization. In addition, this technology would enable simultaneous interaction with multiple devices distributed through the body or tissue, as each of them would operate at their own distinct frequency. Future ATOMS-powered devices could then be swallowed, implanted or injected to perform precise localized diagnosis and treatment.

This research was funded by the Heritage Medical Research Institute, of which Mikhail and Azita are both principal investigators, as well as the Caltech Rosen Bioengineering Center, which supported me with a graduate scholarship. Without their support for this high-risk multidisciplinary research, ATOMS would still be just an idea. 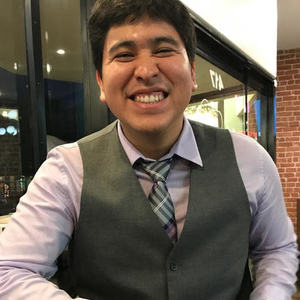