From an idea that first sprouted on a chairlift above the French Alps, our group has now developed a new hybrid imaging modality that merges PET and ultrafast ultrasound imaging (UUI), allowing for simultaneous molecular, anatomical and physiological imaging.
Jean Provost
Researcher, Institut Langevin, ESPCI Paris, PSL Research University, CNRS 7587, INSERM U979
Follow
Like Liked by badcortex and 1 other

The original idea for this paper goes back to 2011, when Mickael Tanter and Bertrand Tavitian were conducting a study1 on the effect of stroke on brain stiffness. The physician Léon Rostan had been the first to characterize stroke, which he described in 1823 as the ‘ramollissement du cerveau’ -- literally, the softening of the brain. A few years later, in 1828, John Abercrombie identified the vascular cause. Back in 2011, we wanted to verify his hypothesis in vivo using shear-wave imaging, which is a UUI mode that can non-invasively map stiffness. In order to fully conduct the study and take into account all potential confounding effects, we ended up using, sequentially, PET, SPECT, MRI, and UUI. The tedious work to align all these imaging volumes, and the challenges in analyzing data that was not acquired simultaneously, made us realize how powerful it would be if we could access all this information in a single imaging modality.

A few years later, in 2014, the two researchers were talking in a chairlift high in the French Alps during one of the breaks at the TOPIM conference, which that year was focusing on the imaging of developmental biological processes. Like everybody else at that meeting, Mickael and Bertrand were discussing the exciting prospects of the emerging but extremely expensive PET-MRI devices for pre-clinical studies, thinking of how it could have improved their experiments in 2011.  ‘Wouldn’t it have been great to perform both PET and UUI simultaneously?’ Mickael asked. ‘Right,’ Bertrand replied. ‘Why didn’t we?’

After convincing France Life Imaging (a French funding body) that PET-UUI was an exciting research avenue, Jean Provost and Anikitos Garofalakis were recruited to work on the project. Just a few months later, we had a functioning device that we built by assembling and customizing an ultrafast ultrasound scanner and a small-animal PET/CT, both of which were commercially available. Our first thought was to figure out how much the two modalities interacted with each other in order to make sure both the UUI and PET images would be of state-of-the-art quality. To our great surprise, we simply couldn’t detect any significant interaction that needed to be corrected for! Hence, the hybrid PET-UUI device requires no hardware changes in either of the modalities, which greatly reduced development time.

Once we had a functioning PET-CT-UUI scanner, we wanted to showcase two major capabilities. First, we wanted to show that it could be used to devise novel bimodal biomarkers for conditions such as cancer, stroke, and neurodegenerative disease. For example, instead of looking at vasculature with UUI and metabolism with PET, we could look at joint biomarkers such as voxel-wise standard uptake values and blood volume in each voxel, which we used to phenotype genetically-modified tumours.

Second, we wanted to show that we could synchronize both modalities for dynamic imaging applications; to do this, we looked at the rat heart and formed, for the very first time, images of the beating heart using ultrasound overlaid with metabolism using PET.

Since it benefits from both highly sensitive molecular imaging in PET and the strongly enhanced anatomical and physiological imaging of UUI compared to conventional ultrasound, we believe that PET-CT-UUI could be a powerful tool for use in pre-clinical studies. Moreover, it could potentially be expanded to the clinic by assembling existing PET and UUI devices that are already available in hospitals, hence greatly limiting cost for the healthcare system compared to PET-MRI multimodality.

Most recently, we have shown the feasibility of imaging capillaries in the rat brain in depth using UUI, which could provide exciting new insights in the mechanisms of stroke.  Our hope is that with our PET-CT-UUI device, we may soon be able to revisit our 2011 study to uncover new information about stroke and brain stiffness that we couldn’t access before. 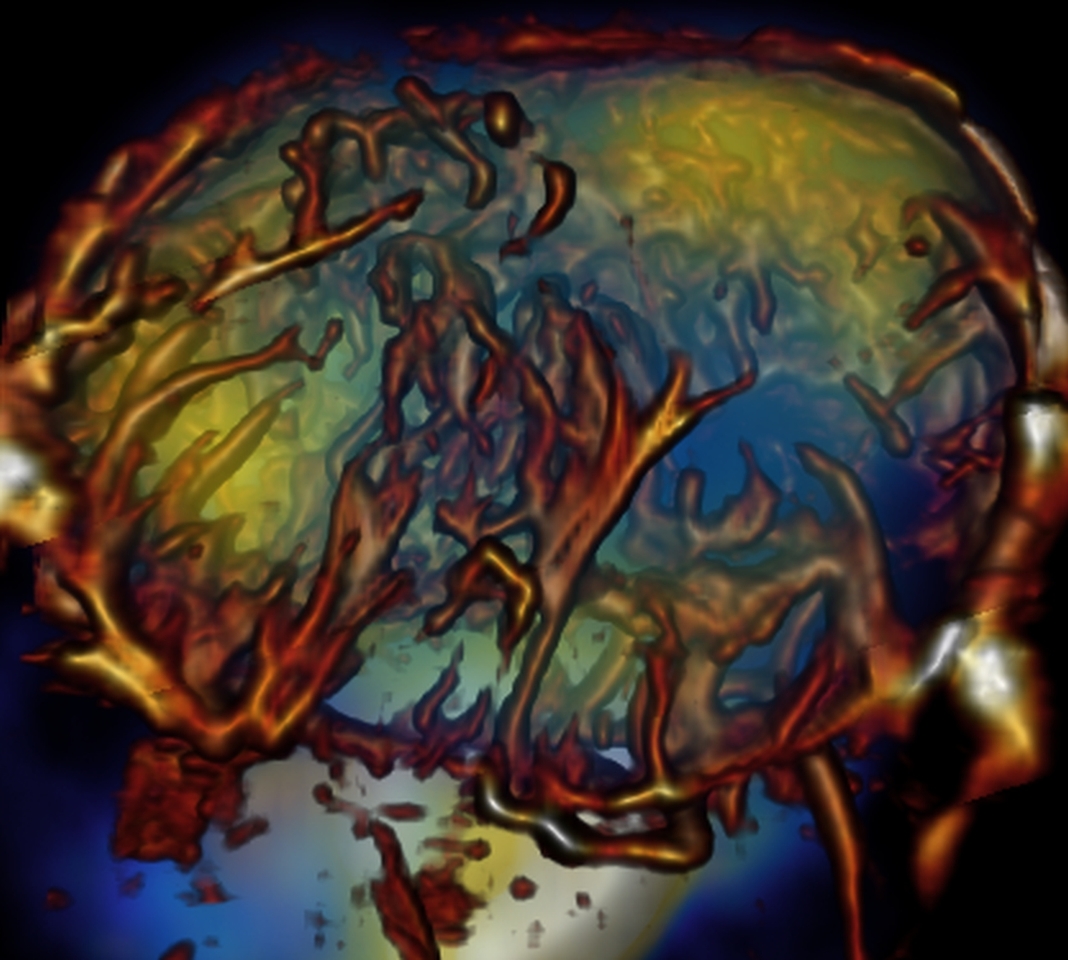 From an idea that first sprouted on a chairlift above the French Alps, our group has now developed a new hybrid imaging modality that merges PET and ultrafast ultrasound imaging (UUI), allowing for simultaneous molecular, anatomical and physiological imaging.