It has been an interesting journey to develop low-input microfluidic tools to examine epigenomes
Chang Lu
Fred W. Bull Professor, Virginia Tech
Follow
Like Liked by Chang Lu and 1 other
0

The paper in Nature Biomedical Engineering is here: http://go.nature.com/2Hf8hub

I became interested in applying microfluidics to solve molecular biology problems in 2008-2009. I had gained understanding over the years that molecular biology tests provide actionable information to clinicians and thus real potential for improving treatment strategies. However, it was not clear to me where to start from. There were some early works on using microfluidics to detect specific genes and their transcripts but at the time, I did not feel that we could do much better than what was already out there.

During that period, I was contacted by a fine molecular biologist, Michael Litt from Ball State University, almost purely by accident. I remember that Michael contacted somebody in the engineering dean’s office of Purdue University to ask if they knew anybody with expertise on microfluidics. The person in the office remembered reading something about my work so he forwarded the email to me. I did not know what epigenetics was back then but I thought this was as good as anything else for a starter project on molecular biology. Michael explained to me that he had to kill a number of chicken to collect enough bone marrow material to perform one epigenetic assay such as chromatin immunoprecipitation (ChIP). He was wondering if we could design something that would work with a smaller number of cells. The initial progress was slow and the work was unfinished when I left Purdue for Virginia Tech at the end of 2009. Luckily, my student Tao Geng was persistent and we picked up some speed once we had our own qPCR machine in the lab at Virginia Tech. We managed to publish the ChIP-qPCR results in 20111. We later went on to demonstrate genome-wide profiling using MOWChIP-seq based on 100 cells in 2015, with critical help from Kai Tan of University of Iowa (currently at Upenn)2.

The project that we have now published in Nature Biomedical Engineering developed from those initial results, mostly because I have always been intrigued by the underlying biology of brain activities. My elder brother has been suffering from schizophrenia since the age of eighteen. The struggles of mental patients and their families, due to lack of understanding or options, are all too real to me. Once we published on MOWChIP-seq, I started to think about using similar techniques to tackle molecular neuroscience in the brain. I was very lucky to have the chance to spend half a year in Joe Ecker’s lab at the Salk Institute in 2016. Joe’s lab had done some pioneering work on brain epigenomics3. With help from Joe and his collaborator Marga Behrens, my group started to look at mouse brains.

The current paper was very much a result of all these leaps and turns in my scientific pursuit over the last 10 years. This is the first paper from my lab related to molecular neuroscience. The first author Sai Ma was one of the best experimentalists I have ever trained. His fearless attitude toward new things was critical for carrying out such a complex project that was very new to both of us. David Xie of Virginia Tech was very helpful on some data analysis issues we had. The collaboration with Javier González-Maeso of Virginia Commonwealth University allowed us to examine samples with direct relevance to mental diseases. The collaboration with Javier is ongoing. In the near future, taking advantage of microfluidic tools, we hope to generate further insights into mechanistic details involved in mental diseases. I hope that you enjoy reading the paper.

The above figure (also included in the banner) was created by Sai Ma and Chang Lu. The MRI image of C57BL/6 mouse brain in the figure was generated using Waxholm Space with permission from G.A. Johnson of Duke University. 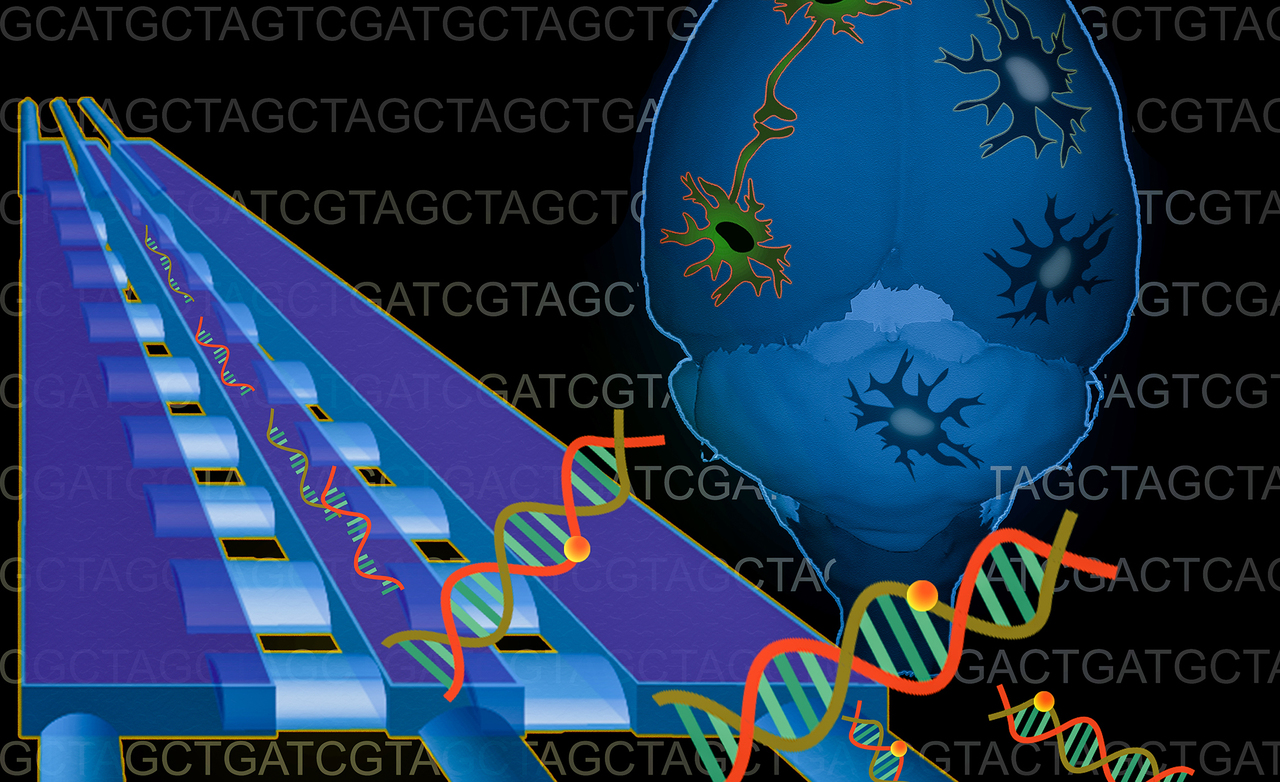