The journey from a bore-lining detector array to a snug fitting MRI glove
Bei Zhang
Research Scientist, Center for Advanced Imaging Innovation and Research, New York University School of Medicine
Follow
Like Liked by Ben Johnson and 1 other

The paper in Nature Biomedical Engineering is here: https://go.nature.com/2GkZaqQ

In 2008, I joined the radiofrequency engineering laboratory at NYU School of Medicine, to work with Graham Wiggins and Daniel Sodickson. At the time, Graham had just astonished the field of magnetic resonance imaging (MRI) with his 90-element detector coil helmet (now on display in London’s Science Museum, Fig. 1), in which he cleverly leveraged symmetries similar to those found in 240-carbon ‘buckyball’ molecular structures to minimize coupling between elements1.

Together with Dan, the pioneer of parallel MRI (which uses radiofrequency (RF) coil arrays to accelerate imaging), Graham and I, along with several other colleagues, set out to build a ‘bore-lining’ 124-element array, intended to be housed behind the covers of the MRI machine, and to enable enhanced imaging of a broad range of body structures. In pursuit of the best possible performance, we carefully bent hundreds of copper wire segments into complex shapes, which we painstakingly soldered together, with capacitors in between, to create an overlapped array of 124 individually tuned and matched coil elements.

We spent months hunting down preamplifier oscillations in the system, only to learn that an unexpected form of electrical interaction between the elements was preventing us from achieving the expected signal-to-noise ratio (SNR). Lifting the coils away from the body augmented the effects of coupling between elements: at this distance, even the tiny noise-like currents which are inadvertently injected into the coils by our preamplifiers propagated through the system, significantly deteriorating their overall performance2. The bore-liner array, now ‘on display’ in our RF laboratory in New York, proved to be too problematic for day-to-day use; but it taught us many lessons. Notably, it instilled in us a deep appreciation of just how finicky traditional RF coil array systems can be.

Chastened by the bore-liner experience, we shifted our attention to the other end of the coil design spectrum, and focused on building close-fitting coils that could expand and contract to optimally accommodate individual subjects. Even with coils closely adjacent to the body, it is important to control coupling effects. In a characteristic stroke of genius, Graham realized that a trellis structure, such as those often used to support climbing plants, could also be used to create well-decoupled size-adaptive coil arrays (Fig. 3). We built several prototypes to explore this idea3, but soon realized that the electrical and mechanical complexity of trellis coils would make them too delicate for high-performance routine use.

In September of 2016, Graham passed away unexpectedly, leaving us all heartbroken, and in many ways at a loss. As I searched for new ideas to explore, Dan and another colleague in the lab, Martijn Cloos, encouraged me to step out of my comfort zone and think about new ways of building RF coils for MRI. The bore-liner and the trellis prototypes both struggled with the same fundamental problem—the coupling among elements. We wondered, “what if, instead of letting coupling kill our projects, we tried to kill the coupling?” We liked the idea, but didn’t know how to go about it.

Initially, we experimented with various forms of shielded loops, in an attempt to ‘hide’ the currents from neighboring elements. After I noticed a particularly interesting design in some papers about wireless power transfer4,5, we started to build coaxial elements rather than traditional elements formed from unshielded conductors.

The initial experiments were not very successful, yet we encouraged each other to keep trying. Often on the weekends, Martijn and I would sit at the scanner, sometimes until 2 am, varying the overlap between sets of coils, searching for evidence of reduced coupling effects, only to be stymied again. One day, as we were about to give up, we decided to try one last thing (although ‘decided’ somehow sounds quite deliberate when, in truth, we may have been desperate enough to try just about anything). We reversed the preamplifier bias on our new elements… and the coupling effects that had been plaguing us all these years suddenly disappeared like snow beneath the sun.

That night, at the end of a long day of experiments, we didn’t immediately comprehend what had happened, although we knew we had a breakthrough.

In the days that followed, as we tried to reconcile our initial working theory of perfectly balanced opposing currents with our experimental observations, we started to realize that the reverse preamplifier bias was eliminating coil coupling through an entirely different mechanism: it was not balancing currents at all; instead, it was blocking the currents them from flowing in the first place. We were creating coil elements with an inherently high impedance, over a broad range of frequencies.

Meanwhile, at the annual meeting of the Radiologic Society of North America (RSNA) in November of 2016, General Electric (GE) demonstrated a blanket coil to improve patient comfort and workflow in routine clinical practice. Intriguingly, as further revealed at the annual meeting of the International Society for Magnetic Resonance in Medicine (ISMRM) in April of 2017, the GE blanket used a combination of specially-engineered material (INCA wire) and so-called ‘e-mode preamplifiers’ to eliminate coupling effects6. The mechanism by which the GE coils are decoupled from one another was not clear from their presentations (and, in fact, at the time of this writing, that mechanism has yet to be revealed). Fascinated yet mystified by their approach, we redoubled our efforts to perfect our high-impedance coil array, and set out to create the craziest prototype we could think of—a prototype which would be more or less unthinkable without robust and automatic decoupling.

With 27 bones hinging on one another, the human hand is one of the most complex and beautiful pieces of natural engineering. Its dexterity is one of humankind’s most important assets. Nevertheless, though various MR coils have been designed for imaging of the extremities, none of these existing coils is capable of delineating the intricate details of the hand in all the complex actions and postures that matter most. We therefore set out to build a garment-like coil array that could capture both the internal structures and the fundamental expressiveness of the hand. The glove coil, detailed in our paper just published in Nature Biomedical Engineering, follows the contours of the wrist, palm, and fingers with individual flexible high-impedance elements, allowing the hand to move freely in the MR scanner, without degrading the high-resolution visualization of underlying structures (Fig. 4).

The glove coil has already allowed us to image the mechanics of a wide range hand motions, such as signing with American Sign Language gestures (Fig. 4), gestures from pop culture (Fig. 5), grasping objects, or even playing a keyboard. Graham was an accomplished musician, and I like to imagine his gloved hands improvising to the rhythm of the MR scanner, a kinetic symphony of tendons, nerves, bones, and muscles dancing as we look on in appreciation.

As our findings show, high-impedance coils can unlock new forms of dynamic visualization in MR. And our team continues to explore new, valuable applications of this technology.

Thanks to Martijn Cloos, Daniel Sodickson, and Pawel Slabiak for their help in writing this article. 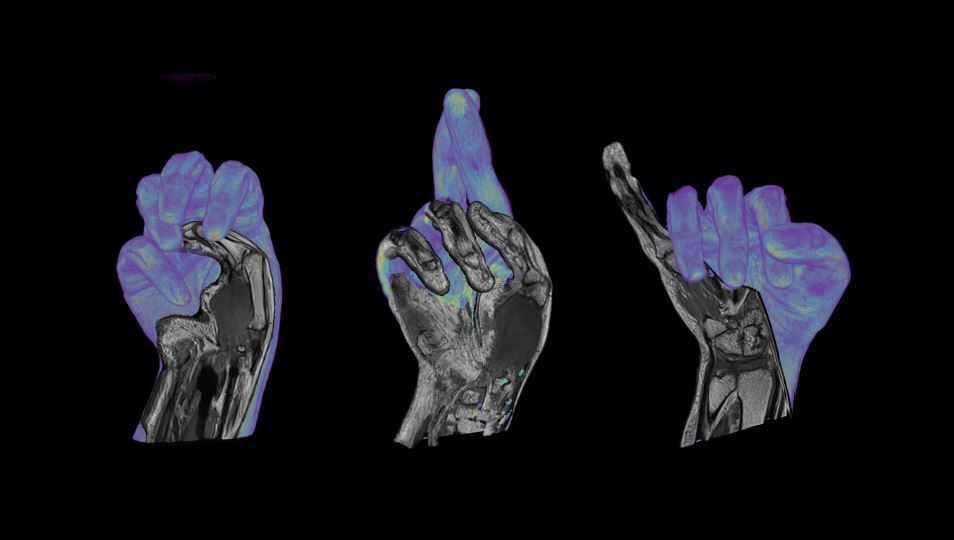