We incorporated a common mechanic of development — strain — into the protocol for generating human intestinal organoids, resulting in enhanced maturation and function
Holly M Poling
Sr Research Asst, Cincinnati Children's Hospital Medical Center
Follow
Like Be the first to like this
0

When discussing tissue engineering, almost everyone will say that the ultimate goal is to provide autologous tissues for transplantation. In most cases, we aren’t quite there yet. However, engineered tissues and organoid systems do have a variety of clinical applications already. In the case of human intestinal organoids (HIOs), we now have the ability to personalize treatment: we can generate organoids with the patient’s very own cells and test therapeutics. These organoids can also be explored to model human biological interactions that animal models cannot recapitulate. At the same time though, the utility of our organoid structures is limited due a variety of factors including their fetal maturation status and small size1

One of the themes in our groups’ work is incorporating additional complexities into the human intestinal organoid system, in the hope of inching towards that ultimate goal of personalized treatments. We have previously employed a transplantation strategy to induce growth and maturation far beyond what we observe in vitro, and even added a functional enteric nervous system to the HIO2,3.

For our present project, we wanted to see if we could address some of the limitations associated in working with HIOs — their size, shape and maturation status. We considered our current protocol (Movie 1) and the structures we were able to generate through a mimicry of signaling pathway perturbations during specification and early organogenesis.

Movie 1. In vitro human intestinal organoid generation. First, definitive endoderm is generated, from which spheroids bud. The spheroids are collected, suspended in a 3D matrix and allowed to develop further prior to transplantation. Animation copyright Cincinnati Children’s Hospital Medical Center (CCHMC), reproduced with permission from Michael Helmrath and CCHMC.

But human intestinal development does not end there. After specification and tube formation, there is rapid growth, lengthening, and looping of the human intestine. We thought to ourselves, “How do we begin to incorporate the contributing factors to these dynamic structural changes?” We looked to recent literature on how the gut forms and noticed a theme of underlying mechanical cues4,5. In particular, there are very elegant studies from Clifford Tabin’s laboratory which heavily influenced our thinking, and we had one of those “aha!” moments — let’s add mechanics to our system!

Even though adding mechanics seemed to be a straightforward direction, seamlessly incorporating it in our system was not trivial. Thanks to an NIH Intestinal Stem Cell Consortium meeting, we discussed several options with our collaborator James Dunn of Stanford University. Fortunately, James was using lengthening devices to increase intestinal length in animal models, and we finally had a way to incorporate mechanics within our system. We utilized a spring to apply a strain in our transplanted tissues, thinking we might get a structure more akin to a tube, and we were successful in doing so. However, in looking closer at the tissue we realized that the changes were far beyond what we could have anticipated or hoped to see. When we observed the topography of the HIOs with and without strain, we found that we promoted the villification process. We were thrilled to observe this phenomenon as it was somewhat analogous to the observations in other model systems (Figure 1).

Figure 1. Scanning electron micrographs of transplanted HIOs with (right) and without strain (left). Scale bars, 100 μ m. Reproduced from Figure 6a of our manuscript.

We then went on to assess our structures on additional levels including transcriptionally and functionally. On every level we observed improvements to the HIOs with the application of strain compared to those that did not experience strain. Our evidence supported the idea that this incorporation of mechanics, or even the singular application of one mechanical cue, could drastically impact the form and function of our engineered tissues.

For us, this study demonstrated the necessity for including the mechanics of development within tissue engineering methodologies. We hope that this serves as a basis for others, working on any organ system, to look beyond our current protocols and augment them, providing additional stimuli within organogenesis. We believe that as our mimicry of natural development improves, the tissues we make will better recapitulate their native counterparts. 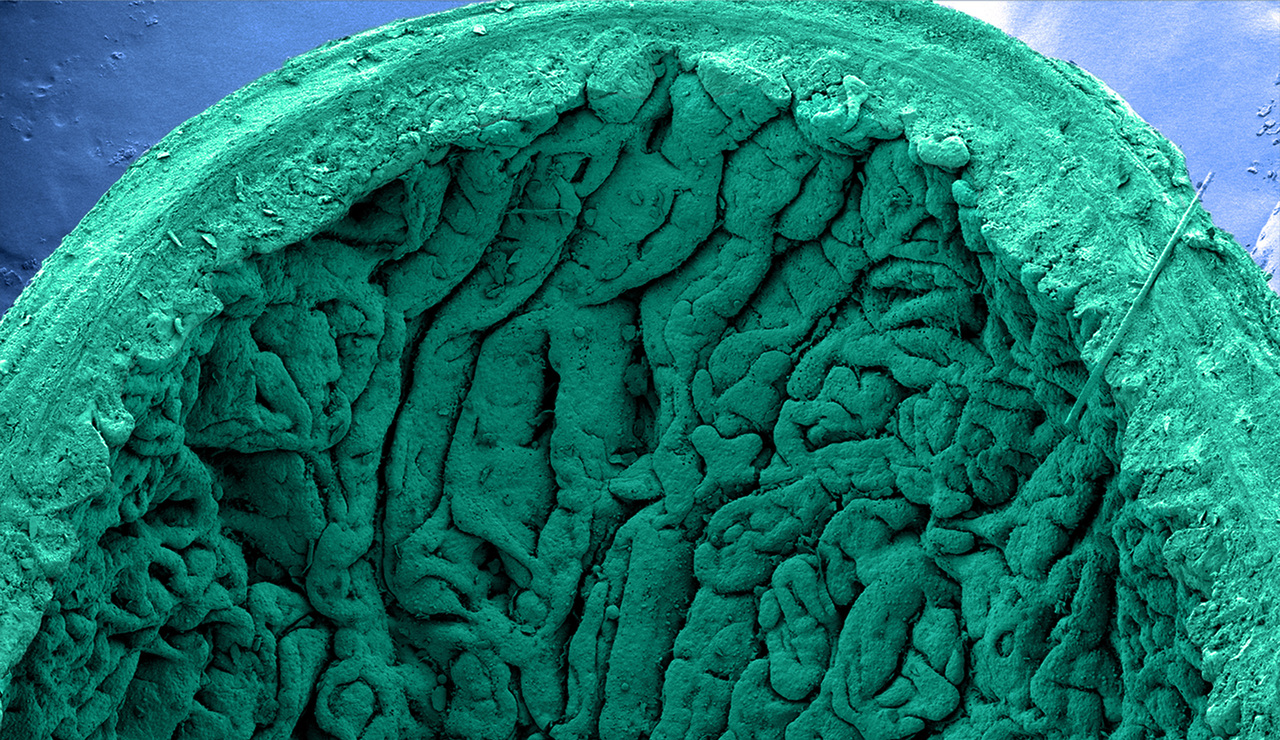 We incorporated a common mechanic of development — strain — into the protocol for generating human intestinal organoids, resulting in enhanced maturation and function