The story of how we created a DNA-built enzyme that flips lipids in biological membranes up to several orders of magnitude faster than natural proteins.
Alexander Ohmann
PhD student, University of Cambridge
Follow
Like Liked by Ruth Milne and 2 others

Our paper in Nature Communications is here: https://go.nature.com/2K6QKGn

Membrane proteins are integral for every living cell’s health. About 30% of the human genome encodes membrane proteins and roughly 50% of approved drugs are targeted at them.1 Neuronal diseases like Alzheimer’s or Parkinson’s and blood disorders like sickle cell disease have been linked to impaired membrane protein function. What if we could give a patient something that can take over the role of the defective protein and the patient would recover? Intelligent medicine that is not merely a molecule of a certain shape or chemistry, but a programmable nanodevice that could mimic the protein’s function? This vision drives my current research at the University of Cambridge in the group of Ulrich Keyser.

In our lab, we use DNA to create functional structures at the nanoscale. DNA is hereby not employed for storing genetic information but as a building material held together by Watson-Crick base pairing. This method is creatively called “DNA origami”. By carefully designing the sequences of synthesized DNA strands, we can assemble arbitrary three-dimensional structures with pre-programmed geometries. Equipping them with hydrophobic tags like cholesterol, we previously created a variety of nanostructures that self-insert into lipid bilayers like cell membranes and form ion-conducting nanopores thereby mimicking natural protein ion channels.2-4 As we were interested in the ion-conducting properties of our constructs, we teamed up with Aleksei Aksimentiev’s group from the University of Illinois at Urbana-Champaign who simulated our structures embedded in a lipid bilayer. This is where they serendipitously discovered something that started this project.

Figure 1. Design of our DNA nanostructure (left) and molecular dynamics (MD) simulations illustrating how the structure induces lipid flipping in membranes (center and right). Images adapted from our paper.

Chen-Yu from Aleksei’s group simulated one of our constructs composed of eight DNA strands that self-assemble into four interconnected DNA duplexes (see Figure 1). The all-atom molecular dynamics simulation revealed two things: Firstly, that the lipid head groups reorient to form a toroidal lipid pore at the DNA-lipid interface and secondly, that this toroidal pore allows lipids to migrate between both bilayer leaflets (see Figure 1). One can even follow the transition pathway of a single lipid in the simulation (see Movie 1). The astonishing part was the determined rate of lipid transitions: 107 meaning 10,000,000 lipids per second! At this point we realized: “This could be interesting!”

From literature we learned that in nature these lipid flipping events are performed by proteins called scramblases. While the lipid composition in cell membranes is typically asymmetric (maintained by unidirectional flipping of flippases and floppases), certain events require the use lipids as signals to the extracellular environment for example for marking apoptotic cells. Scramblase proteins are then activated to rapidly equilibrate the lipid composition between the bilayer leaflets. Interestingly, scrambling rates of up to 10,000 lipids per second have been reported for natural scramblases and might be even higher due to some existing experimental limitations.

But there we were: up to a thousand-fold faster than nature. Can this be? We were puzzled but at the same time very intrigued. Could we have actually outperformed nature? The key part was now to show this experimentally. Although we quickly adapted a previously established lipid scrambling assay, we did not see scrambling for quite a while. We eventually bought a commercially available scramblase protein to see how scrambling could look like in our experiments. However, after several unsuccessful weeks we contacted the company and learned that they do not recommend using this protein for any assay that requires it to actually function...

It took a couple more months until we finally measured scrambling activity of our DNA nanostructures. The key was to use them on micrometer-sized giant unilamellar vesicles, so we could look at each single vesicle with fluorescence microscopy. This allowed us to assure proper membrane attachment of our structures and judge the quality of the vesicles we are looking at (not multilamellar). Importantly, this also helped to increase the generally low membrane insertion efficiency of these DNA nanostructures by having more of them per vesicle. Finally, we observed scrambling and were able to estimate the rate and – Eureka! – 107 lipids per second! While a few control experiments were still necessary and some more details regarding the comparison between experimental and simulated scrambling rates needed to be addressed, it finally felt like everything made sense!

Ultimately, we ended up with a quite fascinating assay and even managed a few experiments with our DNA scramblases in cells. For us, the results represent an important contribution to the field of DNA nanotechnology as now DNA structures could be designed to control the lipid composition of cell membranes. Furthermore, it shows the yet to be explored potential of DNA nanotechnology not just as biophysical tools but possibly even for a range of biomedical applications in the future. 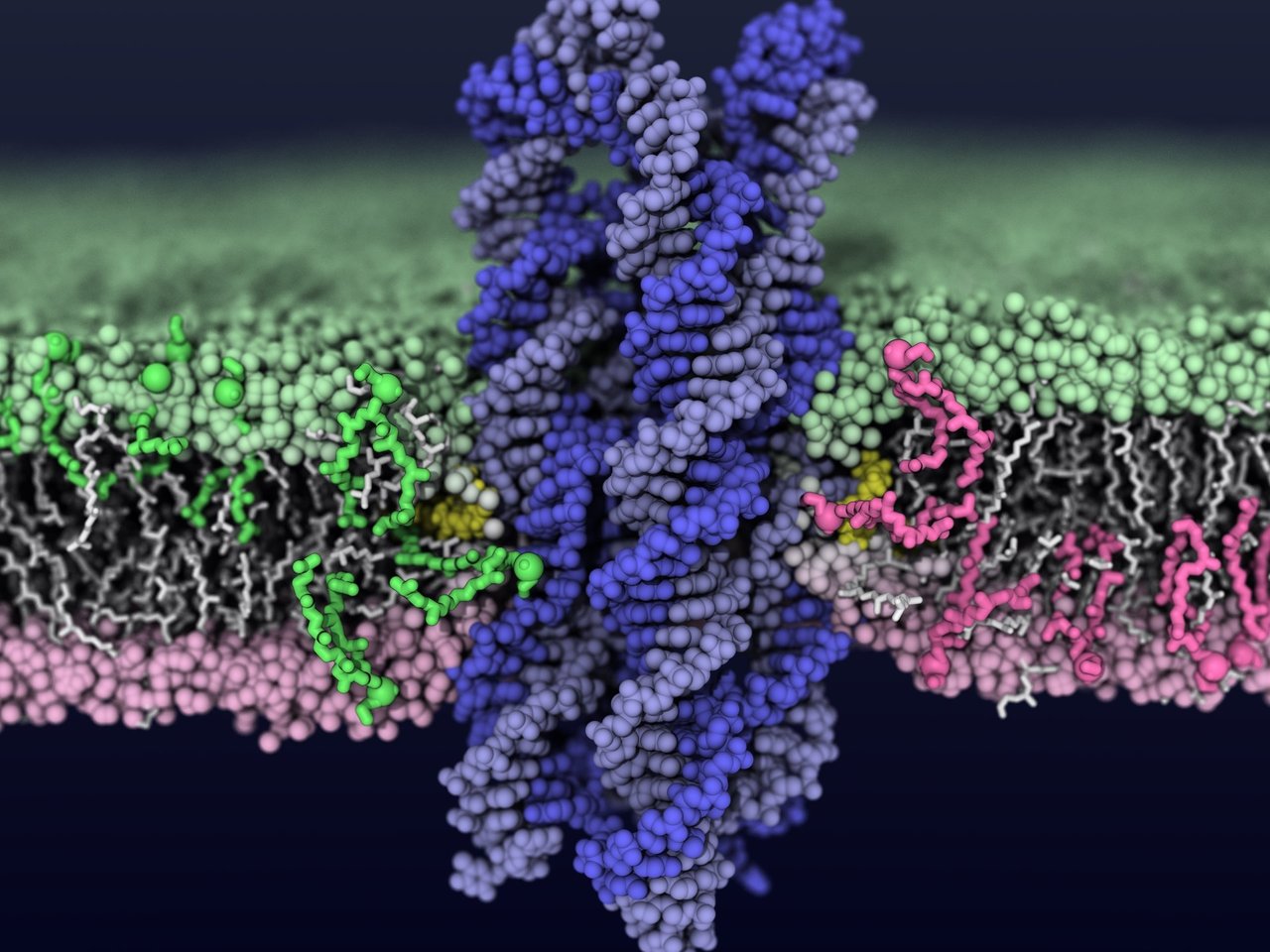 The story of how we created a DNA-built enzyme that flips lipids in biological membranes up to several orders of magnitude faster than natural proteins.