By combining radioisotope therapy and cancer immunotherapy with biomaterials, it may be possible to eliminate tumor metastases and prevent tumor recurrence after local destruction of solid tumors.

A therapeutic strategy that can eliminate primary tumors, inhibit metastases, and prevent tumor relapses has been a dream in our fight against cancer. Together with surgery and chemotherapy, radiotherapy — in which external ionizing radiation beams or therapeutic radioisotopes are used destruct tumors — has been extensively applied for clinical cancer treatment. Of note,  oxygen is an important factor in enhancing radiation-induced cancer cell killing during radiotherapy, but oxygen levels are typically low in most types of solid tumors. On the other hand, although radiotherapy is commonly used to treat local tumors while leaving distant metastatic sites untargeted, previous studies have reported that radiotherapy could sometimes lead to abscopal effects.

Our lab has been working hard to develop alternative cancer therapy strategies based on biomaterials and nanotechnology. Over the past years, we have demonstrated that by enhancing the oxygenation level inside the tumor, the therapeutic responses to radiotherapy could be dramatically enhanced.1,2 In the meanwhile, we have shown that by using adjuvant nanoparticles as the therapeutic agent to ablate tumors via laser-induced photothermal therapy, robust antitumor therapeutic effects could be achieved, particularly when in combination with immune checkpoint blockade therapy.3,4 Inspired by those findings, we teamed up with Dr. Kai Yang, my former student and now an associate professor at the School of Radiation Medicine and Protection in our university, to design the current project published on Nature Biomedical Engineering.5

In the current work, Catalase (Cat), an enzyme that converts tumor endogenous H2O2 into oxygen, is labeled with a therapeutic radioisotope 131Iodine, and then mixed with sodium alginate (ALG) as well as an immune-adjuvant CpG oligonucleotide (Figure 1). In this system, ALG, as a soluble polysaccharide, could be rapidly transformed into a gel in the presence of Ca2+ ions after local administration into tumors, leading to long-term fixing of the other components inside the tumor. Cat is able to decompose tumor endogenous H2O2 to increase the oxygen level within the tumor. CpG works as an adjuvant to promote the immune responses of tumor-associated antigens after tumors are destructed by 131I-radiotherapy. As a result, 100% tumor elimination efficacy under rather low radioactivity doses could be achieved in a mouse tumor models, a patient-derived xenograft model, and a rabbit tumor model. Furthermore, local treatment with a 131I-Cat/CpG/ALG hybrid fluid after eliminating local tumors could trigger systemic antitumor immune responses, which in combination with checkpoint-blockade would attack distant tumors for metastasis inhibition. Afterwards, a strong vaccine-like immunological memory effect to protect mice against tumor re-challenging is further realized.

Our new radioisotope-immunotherapy strategy can manage large solid tumors, eliminate spreading metastatic tumors, and induce immune-memory effect to prevent tumor recurrence in mouse and rabbit tumor models. This method may have potential for tumor interventional therapy to treat many types of solid tumors, and would be particularly meaningful for those late-stage cancer patients that are not cured by conventional surgery or radiotherapy strategies. One important note is that all the components used in this strategy are biocompatible; our next major goal is to push this biomaterials-based radioisotope-immunotherapy strategy into clinical translation.

Figure 1. (a) A scheme illustrating in situ gelation of the 131I-Cat/CpG/ALG hybrid fluid after local injection into tumors. (b) In vivo bioluminescence images to track cancer metastases in different groups of mice after various treatments to eliminate their primary orthotopic 4T1 breast tumors. After local elimination of primary tumors with 131I-Cat/CpG/ALG, the generated immune responses together with CTLA4 blockade could effective inhibit tumor metastases. Figures adapted from ref. 5. Springer Nature. 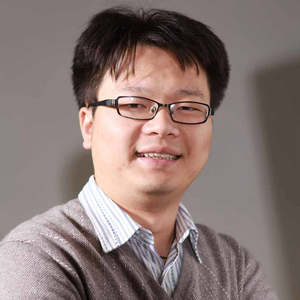 Dr. Zhuang Liu is a Changjiang Distinguished Professor at Soochow University in China. He received his BS degree from Peking University in 2004 and PhD degree from Stanford University in 2008. In 2009, Dr. Liu joined the Institute of Functional Nano & Soft Materials (FUNSOM) at Soochow University. The primary goal of his research team is to develop innovative biomaterials and nanotechnology for biomedical imaging and cancer therapy. He is particularly interested in the modulation of tumor microenvironment with nano-systems for enhanced cancer therapy, as well as employing biocompatible materials to boost cancer immunotherapy after local tumor treatment. Dr. Liu has been listed as one of ‘Highly Cited Researchers’ in the disciplines of both Materials Science and Chemistry by Clarivate Analytics / Thomson Reuters since 2015. He is a Fellow of the Royal Society of Chemistry (FRSC). The awards he received include ‘NSFC Distinguished Young Scholar Award (Fund)’, Biomaterials Science Lectureship (RSC), Chinese Chemical Society Young Chemist Award, etc. Now he is serving as an associate editor for Biomaterials.
Follow