In early 2015, when I started my independent position at Harvard Medical School and Brigham & Women’s Hospital, there was excitement about the potential of immunotherapy in treating advanced cancers. But despite the initial success of some immunotherapies, such as immune checkpoint blockers, clinical studies revealed that only a subset of patients exhibit durable responses, suggesting that strategies to target additional components of the immune system might be beneficial. We became interested in designing approaches for targeting macrophages in the tumor microenvironment for several reasons: 1. Solid tumors are heavily infiltrated with tumor-associated macrophages (TAMs), which contribute to their growth and metastatic spread; 2. Tumors release cytokines such as macrophage colony-stimulating factor (MCSF) that polarize macrophages to M2-biased pro-tumorigenic phenotype1; 3. Tumors evade phagocytosis and clearance by macrophages by overexpressing CD47 that can bind to inhibitory immunoreceptor signal regulatory protein alpha (SIRPα) on macrophages and functions as “don’t eat me” signal.2 We reasoned that the concurrent targeting of both pathways could be an effective immunotherapy approach.

In a study recently published in Nature Biomedical Engineering,3 we set out to design a bi-functional system that can simultaneously deliver CSF1R inhibitor and anti-SIRPα antibody to the same macrophage in a spatially controlled manner (Fig 1.). This is based on our previous studies where we have shown that enhanced combination therapeutic efficacy could be achieved by a single nanoparticle that can enable deterministic delivery of the drugs to the same cell as compared to the combination of nanoparticles that carry individual drugs.4

Figure 2: Computer-aided design of CSF1R-inhibiting supramolecule. We started with a known chemical template drug BLZ945 that shows biological activity and developed the energy optimized QM structures, followed by all atomistic MD simulations using a model lipid bilayer system. Here the starting template is seen aggregating at the interface and forming ripples. In contrast, the computationally identified subunit, which is obtained following repeated iterations, shows a stable lipid bilayer. Figure adapted from our paper.3

We decided to use our recently developed ‘Supramolecular Nanotherapeutics’ platform where we have shown that an amphiphilic kinase signaling inhibitor could be designed by utilizing a predictive computational algorithm (Fig 2.).5 The amphiphilic inhibitor self-assembles to form a supramolecule at the nanoscale in the presence of co-lipids. Using this platform, we identified a CSF1R-inhibiting pharmacophore that can form a supramolecular assembly at high drug concentrations (20 mol%) with high stability and controlled drug release, resulting in sustained inhibition of CSF1R signaling pathway.

We demonstrated that the supramolecule efficiently repolarize M2 macrophages to the M1 phenotype, inhibits tumor progression, metastasis and significantly improves survival in breast cancer and melanoma mice models. Modular design of the supramolecule allowed us to integrate and optimize the density of anti-SIRPα antibody on the supramolecule to obtain the drug-antibody ratio that showed enhanced macrophage repolarization and phagocytosis efficiency. A single dose of this combination resulted in significant tumor inhibition in melanoma mice model without any toxicities (Fig. 3).

In summary, our work lays the groundwork for concurrent targeting of pathways that efficiently re-educate the macrophages from M2 to M1 phenotype and also increase phagocytosis of cancer cells for macrophage immunotherapy.  Our next goal is to translate the findings to clinical setting by first validating the therapy in other tumor models and performing comprehensive preclinical studies including assessment of safety, efficacy and dose. Additional future work will include studying the combination of macrophage immunotherapy with current T-cell therapies, as well as immune checkpoint inhibitors. 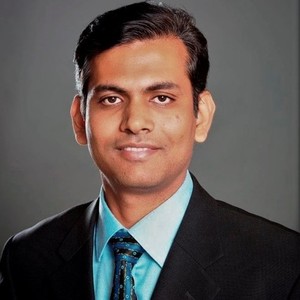 Dr. Kulkarni is an Assistant Professor in the Department of Chemical Engineering at the University of Massachusetts Amherst. His group works at the interface of engineering and immunology to develop innovative technologies for modulating the immune system to treat diseases.
Follow