Miniaturized wirelessly powered implantable devices for medical applications are now reaching the peak of its development. With John A. Rogers (Northwestern University) at the head of the list, there have been many studies showcasing the miniaturization of implantable devices and their encapsulation in polydimethylsiloxane (PDMS) to minimize the mechanical interference with animal behaviour1,2. These devices are usually implanted in relatively stable positions in the animal body such as skull, vertebra, and spinal cord. In addition, due to their weak adherence to tissue, sutures or glue are required to secure the devices on the tissue surface. Because there is a lower limit to the thinness of the electronic components of the device, the development of an ultrathin film substrate that wraps the entire electronic part was needed to fix the devices on the surface of ‘fragile’ or ‘moving’ biological tissues.

For this aim, in our paper published in Nature Biomedical Engineering, we focused on the device-tissue interfacing ultrathin film materials3. Taking advantage of the polymer nanosheet4 and the mussel-foot-protein-inspired bio-adhesive coating5, we succeeded in obtaining a tissue-adhesive polydopamine-modified PDMS ultrathin film (PDA-PDMS nanosheet) that allowed for suture-/glue-free and long-term stable fixation of small implantable devices.

My supervisors, Dr. Shinji Takeoka and Dr. Toshinori Fujie (Waseda Univ.) have investigated polymer nanosheets for more than a decade and demonstrated their biomedical applications as “nano-adhesive plasters”6. When I started my Ph.D. at Waseda Univ., I thought the unique physical properties of the nanosheets (their flexibility and adhesiveness) would be useful for fixing small implantable devices in the body. However, I faced two critical problems; one was the lack of robustness of the nanosheets, the other was the weak adhesiveness of the nanosheets to the wet biological tissue surfaces. To overcome these issues, I made a nanosheet from a silicone elastomer PDMS to enhance its stretchability and robustness, and then modified its surface by PDA to enhance its adhesiveness to the wet biological tissues. The 650-nm-thick PDA-PDMS nanosheets showed 25-times higher adhesion energy to the biological tissue than a 0.8-mm-thick PDMS sheet and achieved the stable fixation of a small IC tag on the abdominal wall of a rat for a month. These experiments were performed with Mr. Isao Takahashi (Waseda Univ.) and Dr. Hizuru Amano (Univ. Tokyo).

Meanwhile, Dr. Yuji Morimoto (National Defense Medical College) and Dr. Izumi Kirino (Kyoto Univ.), who have been researching on metronomic photodynamic therapy (mPDT) were interested in the use of our nanosheet technology to fix the small wireless optical devices inside the animal body to achieve a fully-implantable mPDT. Hence, we developed a ‘tissue-adhesive wirelessly powered optoelectronic device’ by encapsulating a near-field-communication (NFC)-based light-emitting-diode (LED) chip with the PDA-PDMS nanosheet (Figure 1)3. We implanted the device in a cancer mouse model and performed continuous local light irradiation to the tumour site with the implanted device under the injection of a photosensitizer (Movie 1). Surprisingly, some tumours were completely eradicated after 7 days of irradiation, and showed no sign of recurrence. At around the same time, Nature Biomedical Engineering published a review paper about light-based medicine7. At that moment, we believed that our technology would match the preference of this journal and cause a stir in the field of photodynamic therapy as well as implantable medicine.

Movie 1. Tissue-adhesive patch delivers light for cancer phototherapy. A cancer model mouse was made by intradermally transplanting tumour cells into the back of the mouse. A tissue-adhesive wirelessly powered optoelectronic device was implanted into the mouse and continuous local light irradiation to the tumour site was performed with the implanted device under the injection of a photosensitizer. A mouse with a pair of the green LED devices implanted under the dorsal skin stands up to reach the bait from the ceiling of a cage. Movie shown is made from Supplementary Videos 1, 3, 5 and 6 from our paper3.

Notably, the NFC-based LED chip we used in this paper can be purchased as a ‘nail decorating tool’ at a price of a few hundred JPY at an electrical store in Akihabara, Tokyo, Japan, one of the world’s largest electric towns. Nowadays, Akihabara is attracting interests from all over the world as an ‘otaku’ cultural centre, but at the same time, the ‘Cool Japan’ technology in Akihabara for producing novel electronic devices is not to be outdone by the emerging cutting-edge researches published in top academic journals. Therefore, I would also like to emphasize that our project would not be completed without the advancement of industrial technology.

To conclude, although there remain several issues to be solved toward clinical translation to humans, I believe that our system is a promising candidate technology to expand the application range of PDT, especially for deeply located cancers that are hard to reach with conventional methods. Lastly, as a researcher in the field of biomedical engineering, I would like to accelerate the research toward solving the mechanical mismatch between electronic devices and the human body. 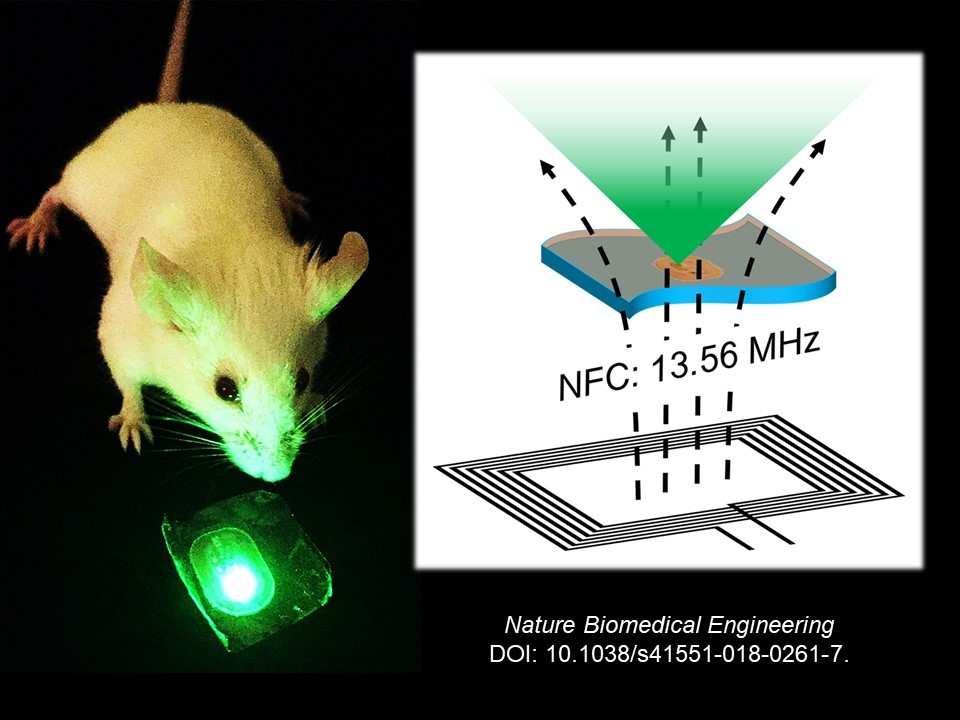