Why, where and how would you produce therapeutic proteins on demand?
Govind Rao
Professor and Director, Center for Advanced Sensor Technology, UMBC
Follow

The paper in Nature Biomedical Engineering is here: go.nature.com/2Oh6SqY

COL Geoffrey Ling (M.D., Ph.D) was frustrated. After several tours of duty in war-torn Iraq and Afghanistan with the US Army medical corps, he had come to some stark realizations. While observing that the US has done historically well at gearing up towards winning wars, it has paid less attention to ‘winning the peace.’ In addition to fighting wars, the Army aims to take care of the needs of civilian populations, among which healthcare is a critical one. He found that the availability of adequate supplies of medicine, especially in remote areas, was a major challenge. Based on his experience and on his role as a program manager at the Defense Advanced Research Projects Agency (DARPA), he decided to challenge the academic community to come up with technology to produce medicines at the point-of-care. We were one of the lucky teams funded by the Biologically-derived Medicines on Demand (BioMOD) program to create a therapeutic protein production platform for tackling this task. It was daunting: in addition to specifying that the time course for production should be less than 24 hours, DARPA also wanted a clear path to regulatory approval for any technology that was developed.

It was clear that the only way to meet this production time target was to use a cell-free system. We started the development process of BioMOD with frozen HeLa and CHO cell extracts [1]. During the course of our work, we had a breakthrough with the rapid development of a lyophilized CHO cell extract that immediately allowed us to imagine a cold-chain free approach to protein production. Then, for use in a remote setting and to pass regulatory muster, it was also clear that an automated process with built-in metrics to assure product quality would be essential. All these factors had to then come together and be proven to work in a robust and reproducible manner. As we finally put together BioMOD, watching it in operation allowed us to see gene expression, purification and recovery in near real time occurring over a period of a few hours. The video shows capture and purification of histidine tagged green fluorescent protein on a metal affinity column. The goal was to create a system that anyone can use with minimal operator intervention. However, getting to that level of autonomous operation was non-trivial. Simple problems such as the appearance of air bubbles during operation plagued us, but luckily the solution was simple – one just runs the system at a slightly higher pressure (3 psi). However, arriving at this solution took a few months. Ultimately, getting the process to work in concert requires computer controlled choreography and this is also what makes the process reproducible and reliable.

BioMOD creates an enormous opportunity to empower remote regions to receive the same quality of medicine that is currently only available in the developed world in a hospital setting. Many fields have experienced vast changes in efficiency and productivity by becoming decentralized: for example, personal computers have empowered people over the past 20 years. In the bioprocessing field, however, little has changed from the early days, with the therapeutic being manufactured at a site distant from the end user through a large-scale process. As healthcare becomes more decentralized and personalized, there is a need for bioprocess technologies to also evolve.

DARPA's BioMOD program seeks to bridge this gap and enable life-saving medicines to be produced at the point-of-care, anywhere in the world, with a compact, relatively low-cost device. In addition to meeting our own warfighter's needs, this capability can seed advanced medical care in civilian settings that are currently impossible to service. Additional applications include disaster relief and/or preparation for an event that could lead to a catastrophic breakdown of facilities/infrastructure such as a solar flares and pandemics, among others. And with the possibility of using human blood as the source of cell extract [2], the BioMOD system could lead to even lower production cost of biologics. The conceptual sketch shows one possible configuration of a device to make proteins on demand at the push of a button and borrows from the current generation of single-serve coffee makers. 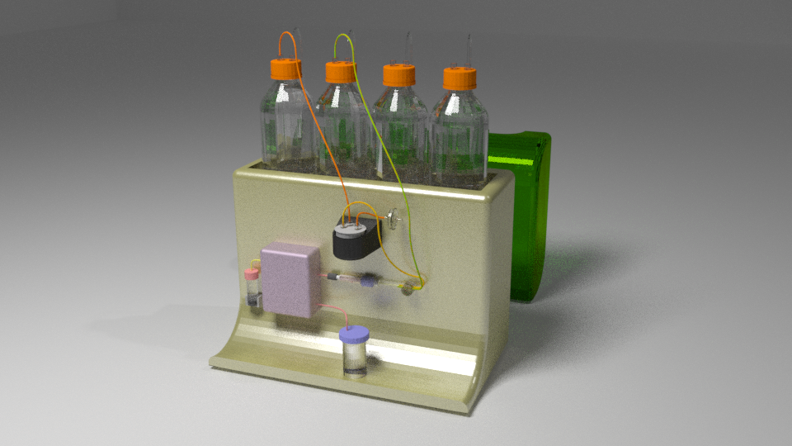 Why, where and how would you produce therapeutic proteins on demand?