Considering both intrinsically limited regenerative capability of the central nervous system (CNS) and the complex inhibitory microenvironment of injured spinal cord, developing effective therapeutics for CNS diseases and injuries [e.g., Parkinson disease and spinal cord injury (SCI)] has been challenging. To this end, stem cell therapy can provide a promising solution. First, they can differentiate into neurons and restore the damaged neuronal circuits. Second, stem cells can secret tropic factors to modulate the inhibitory microenvironment of diseased or injured CNS areas. Nevertheless, low survival rate and incomplete differentiation control of stem cells in vivo remain critical barriers for stem cell therapy before its full potential can be realized. As such, there is an urgent need to develop an innovative approach for enhanced stem cell transplantation and for better controlling of stem cell fate in vivo.

Motivated by these critical challenges, our group has been developing nanomaterial-based bioscaffolds (nanoscaffolds) for controlling neural stem cell (NSC) behaviors. More specifically, we successfully demonstrated several 2D carbon nanomaterial-based hybrid nanoscaffolds that guides NSCs differentiate into different neural cell lineages 1-3.  Graphene and its derivatives-based nanoscaffolds are quite attractive for biomedical applications due to their unique biophysical properties such as strong binding towards biomolecules including extracellular matrix (ECM) proteins,  and their electrical/electrochemical properties (Fig. 1) 4,5. However, a few years ago, we realized one drawback of these graphene-based 2D/3D nanomaterials for clinical stem cell transplantation: they are intrinsically non-degradable due to the strong sp2 carbon bonds. After realizing this potential barrier to translational research, we thought hard from scratch and asked ourselves a question: “Can we develop a biodegradable 2D/3D graphene mimic?” Then my student Letao Yang searched literature, tested several different 2D nanomaterials and finally identified MnO2 nanosheet, a mild oxidant that has been widely applied used for batteries and recently developed for cancer applications as a promising candidate 6,7. We hypothesized and proved that MnO2 nanosheet can not only degrade by intracellular bioreductants, but also extracellular bioreductants such as vitamin C, which is essential for scaffold-based degradation. Unprecedentedly, even without any exogenous bioreductants, we observed significant biodegradation of MnO2 2D/3D nanosheets when they are assembled with cells. These results are very encouraging as most inorganic nanomaterials (e.g., TiO2 nanotubes, carbon nanotubes, gold nanowires) haven’t shown such robust endogenous biodegradability.

We then moved on to constructing a biodegradable hybrid inorganic (BHI) nanoscaffold using MnO2 nanosheet as building blocks, and we aimed to provide a favorable soluble and insoluble microenvironment for the transplanted stem cells (Fig. 2) in vitro as well as in vivo 8. More specifically, we assembled our nanoscaffolds from nanosheets, neurogenic drugs, and ECM proteins through a non-covalent crosslinking mechanism based on a strong binding between the nanosheet and ECM protein.

Fig.2 BHI nanoscaffolds for advanced stem cell therapy. a, To develop an effective method for stem cell transplantation, we synthesized a BHI nanoscaffolds that simultaneously integrate advancements in 3D-hybrid nanomaterials and DFT simulation-based precision drug screening. Cells are labelled with green due to their green fluorescence protein labelling. Laminin proteins are colored in blue. Drugs are represented by red-colored dots. In the simulation scheme, blue colored atoms represent manganese and red colored atoms represent oxygen. b, By transplanting NSCs using 3D-BHI nanoscaffold, cell survival and neuronal differentiation were improved, which leads to a reduction of glialscar and enhanced functional recovery. c, Immunostaining images showing the survival and guided neuronal differentiation of NSCs in the SCI sites. Scale bar in the image on the left: 250 μm; Scale bar in images on the middle and right: 100 μm. 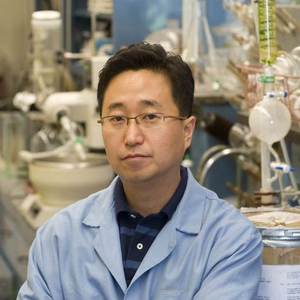