Combining chemically modified alginates with an alternative transplantation technique into the bursa omentalis leads to the protection of allogeneic islets in a preclinical macaque model.
Matt Bochenek
Postdoctoral Research Fellow, MIT
Follow
Liked by Hyungsoon Im and 2 others

Diabetes is a global epidemic afflicting over 326 million people. Its leading treatment — a rigorous regimen of blood glucose monitoring and daily injections of insulin — is less than ideal. Normally, blood glucose homeostasis is maintained by pancreatic islets cells in a highly dynamic process, which in diabetic patients is imperfectly simulated by periodic insulin injections. An alternative approach to restore this dynamic regulation can be achieved by transplanting encapsulated islet cells within semi-permeable hydrogels: the cells can detect glucose changes, secrete insulin to lower blood glucose levels, all while being protected by the immune system, so immunosuppression is not needed1. While this strategy has reversed diabetes in rodent models extremely well2,3, results have not translated equally in diabetic human patients4-7.

Since the 1980’s there have been a number of small clinical trials with encapsulated human islets in alginate microsphere formulations. The results were either difficult to reproduce or resulted in transient islet function in the patients4-8. My advisor Jose Oberholzer and I often debated if the limited cell function in the patients was due to an islet problem or a material problem. Human islets are sensitive cells and can exhibit batch-to-batch variability that may affect transplant outcomes: for instance, donor organ quality, nuances with the artisanal isolation process and number of islets transplanted can all be contributing factors. On the other hand, the biocompatibility of the alginate material was also questionable as certain rodent models would respond with a foreign-body response and fibrosis of the encapsulated islets. Fibrosis, similar to scar tissue, results in deposition of a layer of cells and extracellular matrix (ECM) that restricts nutrient diffusion, eventually leading to death of the encapsulated cells. But was this fibrosis being initiated by stressed islets or just a natural reaction to the material?

To address these questions, Jose found support from the Washington Square Foundation to form the Chicago Diabetes Project: a team of international scientists that combined expertise in material synthesis/purification, islet physiology, and clinical islet transplantation, all under one roof. This way experts could produce highly purified and fully characterized materials, encapsulate an ideal islet batch vetted by experts, and have experienced transplant surgeons transplant these formulations. A clinical trial application was filed….but the FDA was hesitant. The FDA required that material biocompatibility testing (alginate microspheres without islets) be performed in non-human primates (NHP) prior to human patients.

Investigators then traveled to Chicago, ate delicious deep dish pizza, reproduced the formulations as they had previously implemented, and the empty microspheres were laparoscopically implanted in NHP. After 1 month, the microspheres were found enveloped in fibrotic tissue. To see if this was an aberration, two other formulations that had been implemented in clinical trials were then also tested in NHP. We found that each empty alginate-based microsphere formulation elicited similar foreign-body responses in NHP compared to human patients transplanted with the same alginate sphere formulation containing allogeneic islets (Fig. 1A). This really highlighted that the fundamental problem was material based.

Figure 1: A) Representative H & E sections of omental biopsies from three empty clinical alginate sphere formulations that were retrieved 1 month post intraperitoneal (IP) implantation in NHP. These were the same sphere formulations implemented in the clinical trials with transient encapsulated islet graft function. B) General IP space vs. Bursa Omentalis transplantation. General IP space transplantation: spheres distributed around the left and right medial lobes of the liver within the intraperitoneal space (pink) tend to settle and clump within the Douglas space near the bladder. Bursa omentalis transplantation: spheres infused into the bursa omentalis (blue) (behind the general IP space) tend to remain spatially dispersed within the bilayer of the greater omentum and largely do not descend into the Douglas space. C) Dithizone (red dye showing mature insulin granules) and live/dead staining of Z1-Y15 spheres containing allogenic islets retrieved at 1 month and 4 months. Estimated percentages of viable cells within islet cell clusters following live/dead staining performed pre-encapsulation (naked), post-encapsulation in Z1-Y15 alginate (pretx), and post retrieval of non-fibrosed spheres at 1 month and 4 months. Figure adapted from our paper10. SpringerNature.

I was then tasked with improving the biocompatibility of alginate. Being a new graduate student, I thought “why not throw some PEG on it and see what happens?” So I came up with a chemical conjugation scheme targeting mannuronic acid residues, altered variables such as PEG molecular weight and concentration, and transplanted seven formulations into a fibrosis mouse model. I retrieved them after 1 month and to my surprise….nothing worked. I then realized that this was going to be a very difficult project, and while ruminating on the next steps I should take, a new development occurred.

Arturo Vegas, a postdoctoral researcher in the laboratories of Dr. Anderson and Dr. Langer at MIT, was screening a combinatorial library of small molecule modifications to alginate to discover formulations that could mitigate foreign-body responses. Of the 774 alginate derivatives created, three lead chemically-modified alginate derivatives were found to exhibit anti-fibrotic properties after screening in C57/BL6 mice9. With the support of the Juvenile Diabetes Research Foundation, the two teams were brought together to investigate the chemically-modified alginate formulations’ potential in the pre-clinical NHP model that had been established at the University of Illinois at Chicago. After testing, results indicated that two of the three chemically-modified alginates could substantially reduce the foreign body response in NHPs. I then realized, if I had only tested 767 other PEG formulations earlier I may have found something!

However, as with many positive developments in science, a new problem was uncovered. We observed the non-fibrotic spheres tended to descend over time within the general intraperitoneal (IP) space and clump in the base of the abdominal cavity (Douglas space). As this can affect nutrition of the cells, we thought about ways to stop spheres from falling. Considering the anatomy of the peritoneal cavity, we questioned if we could go behind the general IP space and into the bilayer membrane that makes up the lesser sac (bursa omentalis). This is where we found the friction of the omental folds draping the spheres in the bursa omentalis kept the spheres from falling (Fig. 1B).

After many years of collaboration with talented scientists around the world, and combining a highly biocompatible anti-fibrotic material with an appropriate surgical implantation technique, we can show viable and glucose responsive islets for the duration of the study (4 months) (Fig. 1C)10. These results in a tough pre-clinical animal model are really exciting, and we are looking forward to the potential benefit these technologies may bring to patients with brittle Type I Diabetes and other diseases that can be regulated by cell based therapies. Also, I personally look forward to tackling the next set of challenges that our material brings. 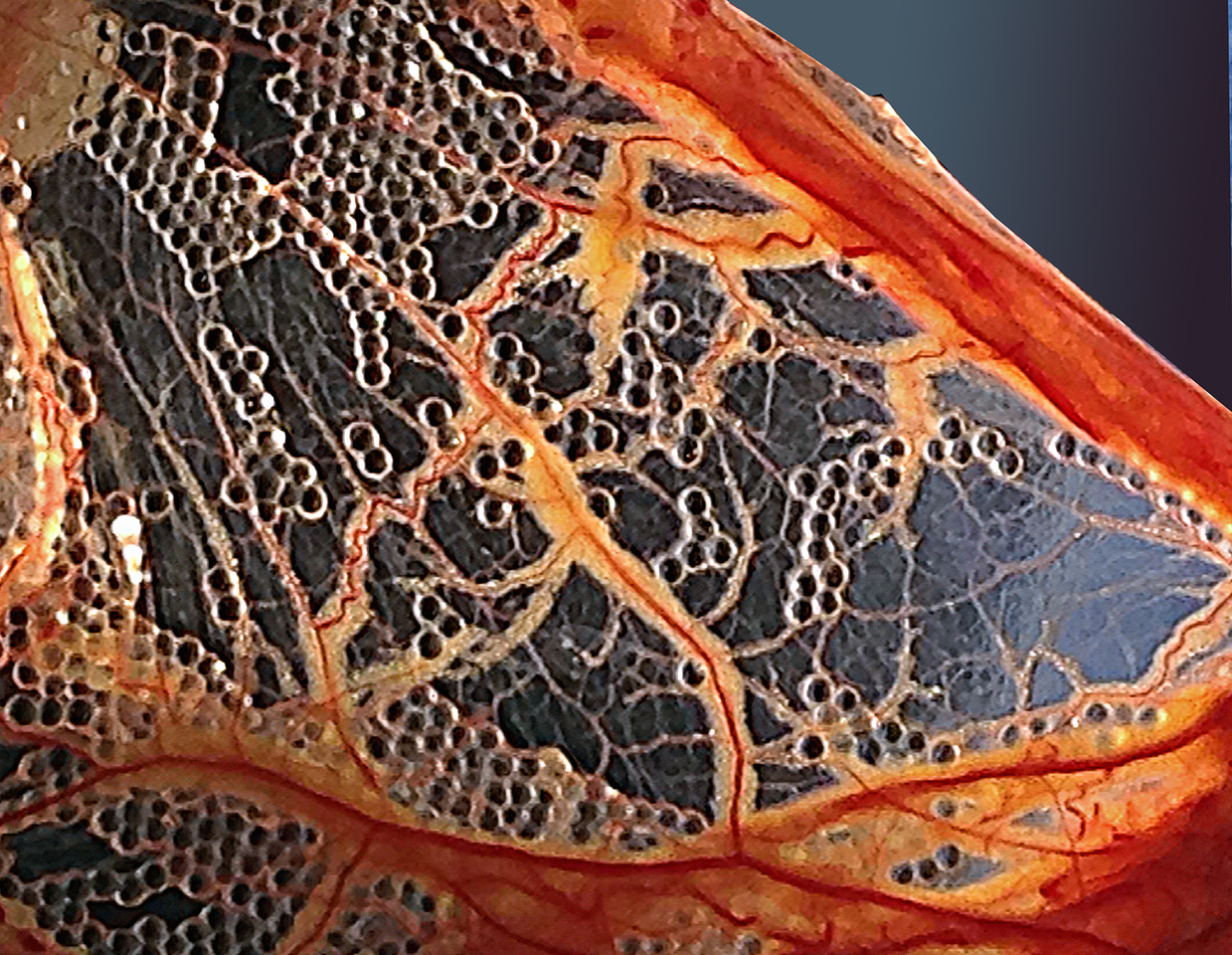 Combining chemically modified alginates with an alternative transplantation technique into the bursa omentalis leads to the protection of allogeneic islets in a preclinical macaque model.