We need microscopes to reveal how chromatin is folded and organized within cells. However, the resolution of light microscopy is not good enough to unravel organization details at this small scale. Instead, we can turn to electron microcopy, or even better, 3D electron microscopy.

During cell division chromosomes form easily distinguishable structures. Chromatin organization in the interphase cell is far more mysterious, and, without specific stains, individual chromosomes can’t be seen. The question of how the long strands of DNA are packed into the nucleus has been pondered since the 19th century. At that time Carl Rabl proposed a territorial organization of chromosomes, where during interphase chromosomes would occupy distinct spaces of the cell nucleus, rather than being intermingled like strands of spaghetti in a bowl. A milestone in verifying this hypothesis was the development of DNA in situ hybridization (ISH) – a method that allows us to label specific fragments of DNA. In a line with older experiments1, in the 1980s ISH finally proved that chromosomes occupied territories in interphase cells1,2 and provided some information on how the DNA is positioned within that territory. However, the resolution of standard light microscopy is not high enough to answer many questions on the finer detail of how chromatin is folded within interphase nuclei, which is important for understanding its functional role. Developed in the first half of the 20th century electron microscope (EM) unraveled details of cellar ultrastructure inaccessible with light microscopy. But ISH staining is difficult with tradition EM methods. More recently, superresolution light microscopy3 of ISH has also been implemented to the study of chromatin organization4–6. However, EM has a much higher resolution than superresolution microscopy. In our latest paper we have developed a novel 3D-EMISH method and imaged, for the first time, sequence-specific chromatin region with EM resolution in three dimensions. We make use of the volume EM method Serial Block-Face Scanning Electron Microscopy (SBF-SEM)7 to image human cells after ISH. Using SBF-SEM we can reach a lateral resolution of 5nm and axial resolution of 30nm (compared to 250 and 500nm for standard light microscopy; superresolution microscopy, such as PALM/STORM, can increase resolution about 10 times but even so EM has a superior resolution). Additionally, we have compared 3D-EMISH with biochemical DNA sequencing-based techniques. These sequencing methods are a recent breakthrough in the field of chromatin organization, and include Hi-C8 and chromatin interaction analysis by paired-end tag sequencing (ChIA-PET)9. While deploying different strategies, sequencing methods reveal averaged genome-wide maps of chromatin interactions. These maps unraveled a new unit of chromatin organization - topologically associating domains (TADs)10,11, or chromatin contact domains (CCDs)12. However, these biochemical methods can’t distinguish individual alleles and give contact frequencies and not a physical distance or volume measurements. Together with Prof. Yijun Ruan (The Jackson Laboratory), who developed ChIA-PET, we chose a 1.7 Mb region of human chromosome 7 consisting of three distinctive CCDs to image with 3D-EMISH.  Our results indicated a high level of heterogeneity in chromatin folding within this 1.7 Mb region between individual cells. 3D reconstructed structures varied from having a single morphological domain to 4 or 5 sub-domains per locus. Remarkably, based on computational methods, most (75%) of the reconstructed chromatin structures had multiple sub-domains, in line with the ChIA-PET. We speculate that this high level of heterogeneity at the single-cell level could reflect varied transcriptional activity in the population of cells.

The authors would like to thank Dr. Karen Meaburn for her proofreading and comments on this post, and Artur Wolny for the scheme of 3D-EM.

3D-EMISH: After DNA in situ hybridization (ISH) with specific biotinylated probes, followed by silver staining, consecutive slices are cut and the surface of the specimen is imaged (3D-EM). Then serial z-stack images are assembled into 3D reconstructions of nuclei and target genomic regions, with a 5nm lateral resolution. 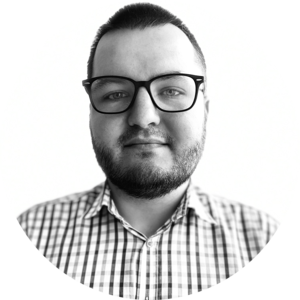