The paper in Nature Communications is here: go.nature.com/2PPyELP

RNA-based synthetic circuits offer the opportunity to reprogram cellular functions avoiding risks of insertional mutagenesis and immunogenicity. In Ron Weiss’ lab at MIT, I was involved in a project about designing RNA-based synthetic circuits using RNA binding proteins L7Ae and MS2-cNOT7 which were successfully interconnected to create post-transcriptional circuits where they function both as inputs and outputs of the regulatory devices(1).

Importantly, to assemble multilayered circuits for broad biomedical and pharmaceutical applications, it is necessary to develop foundational tools that can control RNA activity. I thus proposed a project to my PhD student about re-engineering proteins that modulate RNA expression. I had in mind to realize something that could be potentially encoded only on RNA, so we needed to avoid transcriptional regulation. We thus created protein-protein devicesby re-engineering both RNA-binding proteins and viral proteases such as TEV protease2.

We first studied L7Ae structure identifying possible sites for the insertion of a short aminoacidic sequence recognized by TEV protease. We had two main objectives in choosing the sites: (i) TCS insertions should minimally affect L7Ae structure or RNA binding, and (ii) TEVp cleavage should render L7Ae non-functional. We thus chose three candidate insertion sites for TCS in loop regions away from the K-turn binding domain and closer to the center of the L7Ae sequence (Fig.1a). In the absence of TEVp (State 1 in Figure 1b) and similar to the behavior with wildtype L7Ae, the three L7Ae-CS repressors downregulate translation of the reporter gene. In the presence of TEVp (State 2 in Figure 1b), L7Ae activity is disrupted by protein cleavage, and the mRNA is de-repressed.

Next, we re-engineered the chimeric RNA binding protein MS2-cNOT7 including insertion sites for TEV and other homologous proteases (TVMV, SuMMV and TUMV), designing post-transcriptional cascades.

Finally, we tested whether we could extend our approach by designing proteases that include a cleavage site for an orthogonal protease, enabling a novel protein-protein regulation system (Fig.3).

Our study lays the foundation for protein-driven synthetic circuits that enable construction of tunable RNA-encoded networks. We envision that our platform could also be connected to intracellular protease inputs (i.e. caspases) without requiring modifications to endogenous pathways to link changes of intracellular state to output regulation. On a broader level, using proteases upregulated in specific diseases such as cancer we could enable cell-type specific expression of immunomodulators and reprogram cancer cells and immune response. 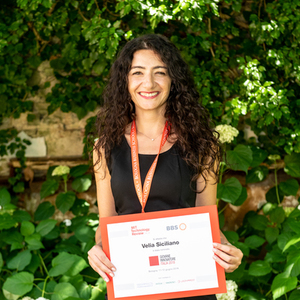