Propagating in vitro the type of cells that are the most useful in regenerative medicine (e.g. human progenitor and stem cells) requires a large number of compounds. In this paper, we present a practical and systematic approach to develop cell-type specific, chemically-defined xeno-free culture media that can dramatically reduce the time and costs associated with the development of cell therapy manufacturing processes.
Julie Audet
Professor, University of Toronto
Follow
Like Liked by Gang Ruan and 1 other

I began my PhD studies in the mid 1990s, under the co-supervision of Jamie Piret (UBC, Michael Smith Labs) and Connie Eaves (UBC, Terry Fox Lab), just shortly after the first engineering labs started publishing work on stem cells.  My PhD thesis described the use statistical design of experiments and response surface methodology (techniques best known as DOE) to optimize HSC cultures based on quantitative stem cell assays and I uncovered many non-linear cytokine effects and interactions. I developed multivariable statistical models to predict optimal cytokine doses. I also discovered that differential (higher) cytokine dose requirements for the expansion of HSC compared with differentiated cell populations. My PhD work on using DOE to optimize HSC culture has been published in Audet et al. 2001 (doi: 10.1073/pnas.98.4.1757) and Audet et al. 2002 (doi: 10.1002/bit.10399). Subsequently, as an independent investigator, and in various collaborations, I have continued using DOE for cell culture process or device optimization (Audet. 2010, doi: 10.1002/bit.22708).

Inevitably, over the years, I became interested in developing bioprocess optimization methods that can address some of the limitations of DOE. For instance, in DOE, studying more than 8 factors simultaneously is often impossible due to the complexity and number of factor interactions. Also, in DOE, progression towards the identification improved process parameters is based on the assumption that the response surface can be described by a simple linear or quadratic regression model, often resulting in severe lack-of-fit.

Then about 10 years ago, a study from Calzolari et al. (doi: 10.1371/journal.pcbi.1000249) drew my attention and triggered my interest in the development of search algorithms and their potential applications in cell manufacturing. It took a few years before I managed to sell this project idea to a prospective PhD student. Perhaps the intensity of the computational component of the project was intimidating to some. Finally, someone with the perfect background applied for the position. Michelle Kim had already worked in my lab as an undergraduate thesis student from the prestigious Engineering Science program at the University of Toronto. She had just completed a master’s in developmental biology in the UK and therefore, had the perfect combination of skills (coding, computation, wet-lab, mammalian cell culture). Michelle set out to work on a cell culture optimization problem with 15 factors and 6 dose levels. A search on this scale had never been attempted before in cell culture.

After evaluating many different types of search algorithms in silico, we decided to develop an approach based on evolutionary computing that operates iteratively with experimental measurements. We first showed that, unlike another algorithm previously used for cell culture optimization, it can navigate a large enough parameter space (>6 billions factor combinations) which is necessary for solving the problem of serum substitution in cell culture; this was verified in the face of considerable biological variance. We demonstrated the robustness and efficacy of the method by developing serum-free formulations for the culture of human TF-1 cells, a hematopoietic progenitor cell line, in three independent trials.

Interestingly, the optimization process generated a considerable amount of cell response versus factor combination data. We then had the idea to see if multivariable analysis of this data could be used to identify factor synergies and also separate the “silent” factors from the most potent ones.  Therefore, a post hoc analysis of the data was performed, in a manner similar to DOE using quadratic regression models. As the search process per se is not dependent on the assumption that these models can faithfully represent the cell responses to the factors, this post hoc analysis is optional and can only be used to provide additional insights into factor effects, when appropriate.

During the last year of the project, Michelle obtained a wonderful internship placement at the Centre for Commercialization of Regenerative Medicine (www.ccrm.ca). There, she was able to continue her work and tested the algorithm for the culture of CAR T cells to identify serum-free conditions for the culture of primary human T-cells in a “real-world” cell manufacturing process. The medium formulations identified supported 5 to 10 times more cell growth, had 5 to 10 times less donor-to-donor variance and were 50% cheaper compared with the commercially available serum-free media used for T cells. Moreover, the culture medium optimization was completed in less than 6 months (this included a 2 month period almost exclusively dedicated to programming of new liquid-handling robot at CCRM). Taken together, the results suggested that the new formulation can be used for the development of a more robust processes for therapeutic T cell production (e.g. immunotherapies).

We expect this method to be a groundbreaking advance in the field by making it possible to develop cell type-specific, clinically-compatible media on-demand. Medium formulations can now be readily obtained to meet specific needs such as minimizing cost by preferentially using small molecules over recombinant proteins which are generally more expensive. Alternatively, formulations based on clinically-approved molecules can be preferred in some contexts. We believe that the algorithm can also be in use for addressing other challenges in cell manufacturing such as the optimization of cryopreservation and the selection of combination of markers for cell isolation. 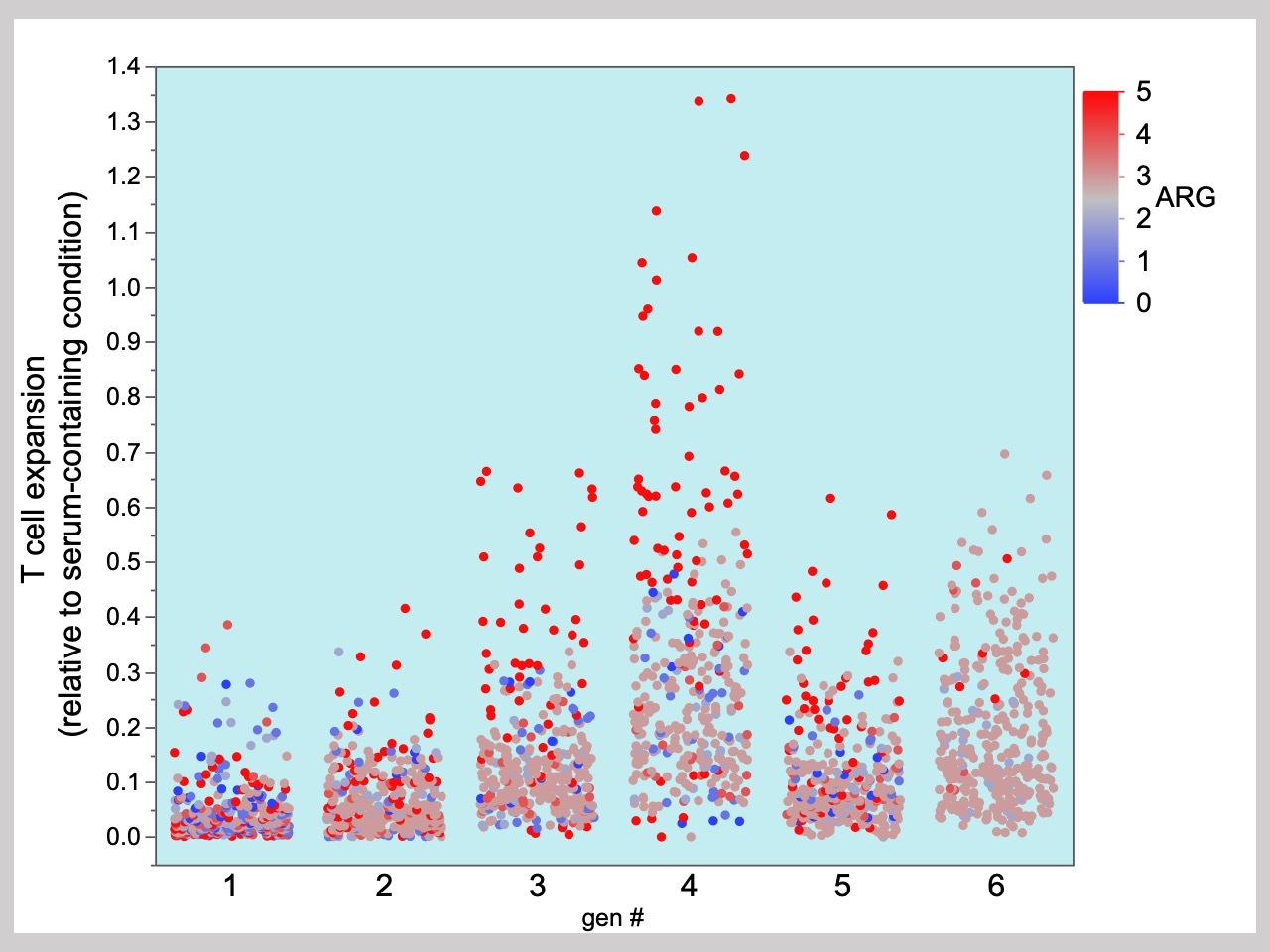 Propagating in vitro the type of cells that are the most useful in regenerative medicine (e.g. human progenitor and stem cells) requires a large number of compounds. In this paper, we present a practical and systematic approach to develop cell-type specific, chemically-defined xeno-free culture media that can dramatically reduce the time and costs associated with the development of cell therapy manufacturing processes.