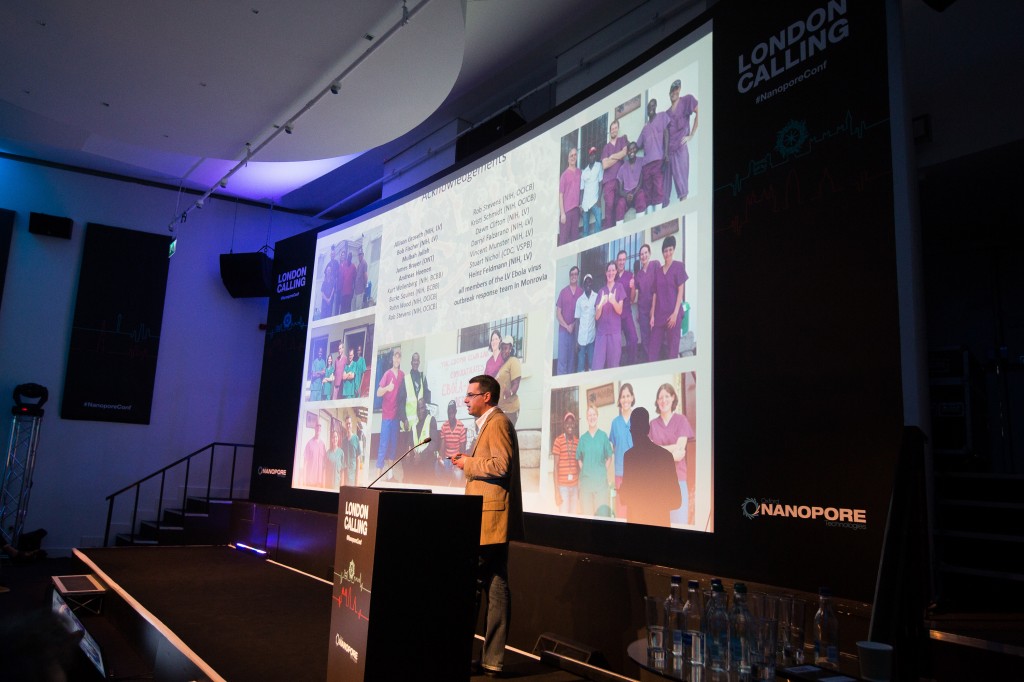 I wrote about the first day of the conference here.

The second day of the conference also had an infectious diseases focus, where we learned how the MinION was used to identify the two major Ebola lineages in West Africa. The MinION has environmental applications, too, as Brook Milligan showed that the MinION was used to trace illegally traded timber, which accounts for $100 billion annually in lost revenue, he said.

Non-infectious clinical applications were less frequent at London Calling. However, the MinION’s long reads have an advantage that was reflected in Ron Ammar‘s pharmacogenomics talk.

After the two pleasantly exhaustive days, I returned to Kuwait with a personalized Fahd Al-Mulla MinION that dazzled staff at my University and Genatak. I am planning to use it, ASAP, and present my personalized vision for the MinION conference next year. However, while at the conference a colleague and I cautioned Oxford Nanopore staff about the need to validate each MinION before use in the clinic. This will be difficult to do if they keep changing the models so frequently. Perhaps clinical validation will be done on the more accurate and enhanced models soon, and I would be glad to be part of the process.

Before the conference, I had heard competitors project a gloomy picture for the MinION, and I wanted to understand why. After the conference, I formed a theory: When Oxford Nanopore management decided to partner directly with scientists to test and enhance their products, these busy scientists did not act quickly and ended up delaying the progress of MinION. More importantly, the first generation MinION’s flow cells, which worked perfectly well at the source, did not work very well after shipment! It turns out that microbubbles were forming in the not-so-well degassed and shipped reagents and flow cells.

This reminded me of my first trip to Kuwait from Glasgow, where I took my engineered cell lines in a flask half-filled with growth media. It appears that the constant shaking and formed bubbles dislodged my attached cells, and they died. I learned, as did Oxford Nanopore Technologies, to de-gas the media well and fill the flask to the rim with media. I’ve now had the cells for many years in Kuwait, living happily ever after, and I am glad to say that the new flow cells appear green on the computer screen indicating that almost all the nanopores are working to full capacity.

The meeting created a tight bond between researchers and Oxford Nanopore, because this time scientists were offered a product that they then can sculpt into their own scientific achievements. One can only imagine the joy we shared when we were handed the keys to a futuristic technology, and we were asked to assist perfecting it!

It made me think how other companies and entrepreneurs should learn from the sharing business model adopted by Oxford Nanopore Technologies.