Access to capital is essential for development-stage biotechs, yet the capital markets for public and private biotech companies are notoriously fragile. For private companies, venture investing in the life sciences has recovered from a rough patch in the ’08-’09 span to the robust financing environment in last year and a half. In the public markets, IPOs haven’t fully rebounded to historical levels, but follow-on financings and debt deals have been brisk as the biotech sector has performed extraordinarily well in 2012. Indeed, the NASDQ biotech index is up ~35% YTD at the end of the third quarter.

Public biotech companies have a mechanism, a shelf registration statement (or S-3, as it is known in SEC terminology), to register securities in advance of their issuance. The securities are “put on the shelf,” generally speaking, allowing them to be sold at any point within the 3-year lifespan of the shelf registration statement. One would think that having an active shelf registration on file is a must-half for public biotechs; they exist in a topsy-turvy macroeconomic environment compounded by the highs and lows of product development. Allowing them to raise money opportunistically and take advantage of strong capital markets or simply strong interest in their stock should be a good thing.

However, this is not the typical view. The filing of a shelf registration statement is often met with derision, and considered a bad omen that shareholder dilution is around the corner. If you follow any of the biotech stock watchers on Twitter, you know what I mean. My sense is that complaints arise primarily for three reasons:

I don’t like dilution either, and I don’t like the artificial feel to the market cap increases that result from the issuance of more shares. But is there empirical support to the notion that S-3 filings predict subsequent financings? Is filing an S-3 a reflection of management and corporate strategy or a fact of life for R&D stage biotechs?

To address these questions, I looked at new shelf registration statements filed between Q2 2008 and Q2 2012 by US-based small cap biotech companies devoted to new drug discovery and drug development. I defined “small cap” as less than $1 billion, as this captures the vast majority of pre-commercial companies. I restricted the list to drug discovery and development companies because a) their value is largely “technology value” — the value ascribed to their development programs above the cash balance, and b) their cost of capital is heavily influenced by the perceived value of their technology.

During this period, I tallied 269 new shelf registration statements by 180 companies (some companies filed more than one, a replacement to an existing shelf that was either depleted or not). By my calculation, there are approximately 340 US-listed, small cap drug development companies in the sub-$1 billion range, so around 50% of these utilize shelf registration statements. Filing S-3s are not a universal capital-raising strategy.

But S-3 filers are a diverse group, with market caps at filing of between $11 million and $840 million. Further, the size of the shelf (that is, the total amount of capital that can be raised by the securities contained in the shelf) varied as well, though there was a slight trend for larger market cap companies to file larger S-3s. Of course, shareholders are interested in “implied dilution,” or the dilution that would occur if the entire shelf was drawn down. As expected, the implied dilution, or the ratio of the shelf size to market cap at filing, tends to be larger for small companies, but as shown in the figure (click to enlarge), there are some significant outliers. I assume that shelf size is related to the cost-intensiveness of future development plans, but perhaps I’m giving management too much credit. 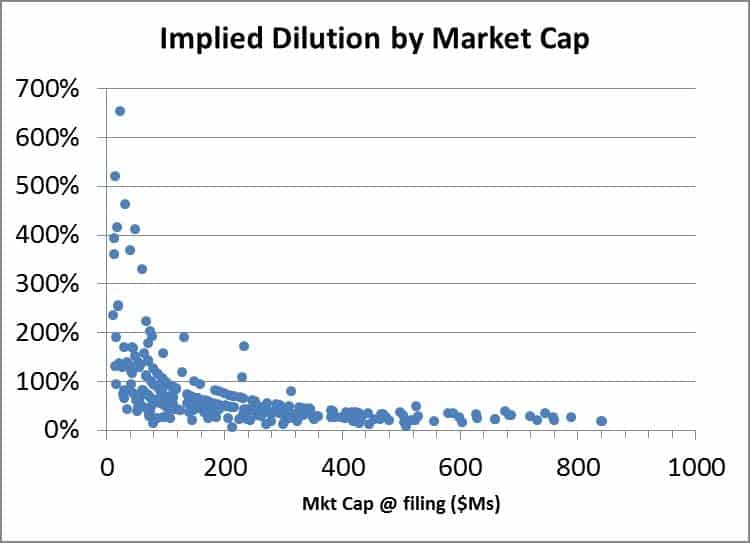 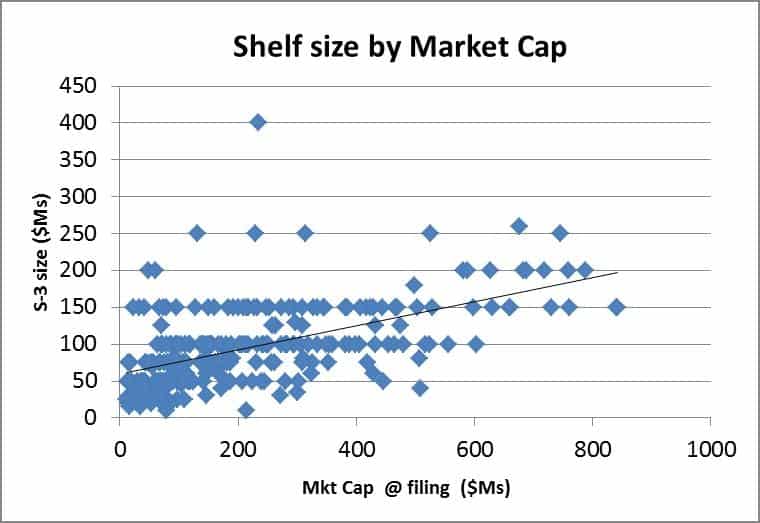 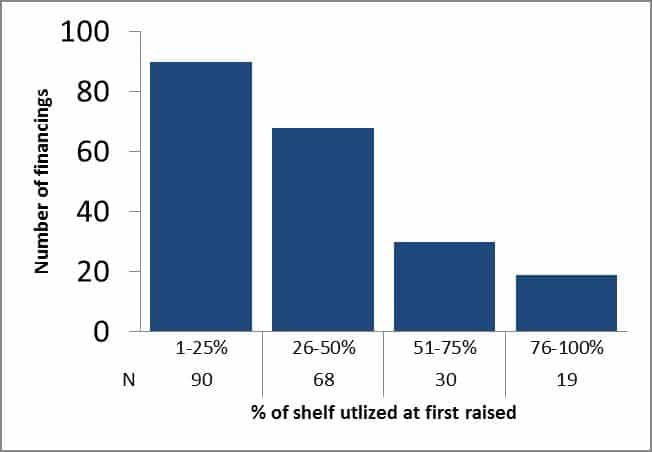 Taken together, the data around S-3s in recent years, a period of economic hardship, indicate that:

Of course, as I noted above, raising money is a necessity for biotech, so noting here that they do, via the shelf mechanism, is somewhat self-evident; if a company files a shelf, why not use it? More important is when and how.  Ideally, shelves are utilized at opportunities when share price is high. Remember that S-3 remain active for three years, so market cap at the time of shelf drawn downs is perhaps a more important metric than market cap at the time of filing. If share price rises (and so market cap) during that time, the implied dilution would decrease.  These are questions to explore in future posts.

I should note that, in the process of compiling these data, I put together a fairly extensive spreadsheet with numerous metrics related to S-3 filers, such as stock performance, extent of insider holdings, estimated runway at the time of filing/draw-down, share price at first raise, etc. If any readers are interested in a particular question, please let me know in the comments below or via direct message on Twitter and I’ll see if I can address it with my database.