A funny thing happened in the stock market last week. Signals for what eventually became an acquisition of a small cap biotech company Icagen (ICGN) were disclosed in an SEC filing because the acquirer, Pfizer (PFE), was a large shareholder. The events struck me as unusual because, a) it’s rare to see pharma publicly tipping their hand regarding business development activities, and b) it seems as though there are very few instances in which a pharma takes an equity position in a public company.

How rare is it? The chart below shows an analysis of public equities holdings of the top 15 pharma companies by revenues. I should note that the list excludes Roche’s large equity stake in Chugai, a Japanese pharmaceutical company, as well as Novartis’s large equity stake in Roche. That said, what I found is that the top 15 pharma hold equity in 40 public biotechs worldwide. To put that in context, in an industry with approximately 650 public biotechs globally, fewer than 10% have pharma as a shareholder. 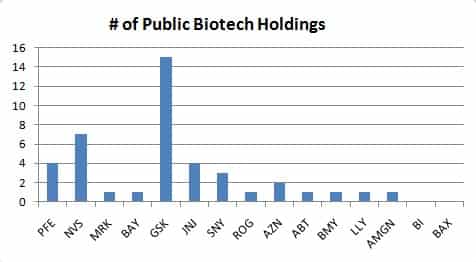 Notably, only TWO companies in my analysis had more than one pharma shareholder, those being Morphosys (MOR), a Germany-based antibody company (Novartis and Astrazeneca) and Intercell (ICLL), an Austria-based vaccine company (Novartis and GSK). The size of the pharma equity holdings ranged from the clearly de minimus ($1M or less) to the substantial; Sanofi’s stake in Regeneron (REGN) is now valued above $850 million and Eli Lilly’s holdings in United Therapeutics (UTHR) is worth about $340 million.

Perhaps we shouldn’t be surprised that GSK is an outlier among its peers. Known as a creative deal-maker, GSK holds equity in 15 public biotech companies, the largest position being in Theravance (THRX). It recently increased its stake late last year.

The majority of deals between biotech and pharma are licensing transactions, discovery alliances, or acquisitions that involve cash payments with no equity involved. Why does pharma take equity in public biotechs, and how might investors interpret this? When I categorized the 40 companies as either platform-based (discovery platform or specific domain expertise) or assets-based (no clear platform, pipeline of market products or diverse compounds), I found that the vast majority fell into the platform category, suggesting that pharma is taking equity in companies that have more to offer than a single lead drug candidate or a basket of assets. Icagen fit squarely in this camp, as the biotech was focused on a broad ion channel drug discovery platform. As for Morphosys and Intercell, the companies with multiple pharma shareholders? Both platform companies. 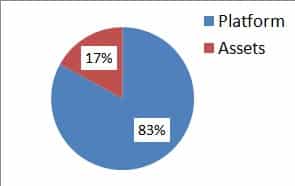 Looking through pharma’s equity positions, I found many that were small (<5% positions), longstanding, and unchanged since the original position was established as part of a licensing or collaboration deal. These data raise many interesting questions (Does this subset of biotechs outperform? Are they more likely to be acquired by the shareholder? When does pharma buy and sell?). My sense is that having Pharma shareholders is certainly not a bad thing, but I wouldn’t say that it foreshadows a takeover anymore than a rich, late-stage licensing deal or a broad discovery alliance that does not involve equity.