Agbio in Africa: a train that is finally rolling 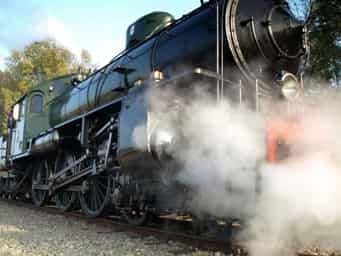 It took an interesting temporal juxtaposition of articles in two very different media – the Cape Times newspaper business section, and an editorial in New Scientist – to set me off, but once I’d started, there was no stopping.

The theme?  The uptake of advanced biotechnology in Africa, and in particular, of genetically modified (GM) crops.

I have been interested in this field ever since I became practically involved back in 1990, with the birth of our fledgling GM crop programme at the University of  Cape Town.  It has been with some degree of enlightened self-interest, therefore, that I have followed the application of GM technology in Africa and abroad – and one of my sources has in recent years been the excellent and regular reports on the global status of commercialized biotechnology and GM crops by The International Service for the Acquisition of Agri-biotech Applications (ISAAA), such as the latest one available here.  It has been very interesting to watch the steep rise in cultivated area under GM crops over the years, in countries like Argentina, South Africa and now Brazil: in fact, there was an almost 100-fold increase in area from 1996 to 2011, from 1.7 million to 160 million hectares.  As the brief reports, this makes

“…biotech crops the fastest adopted crop technology in the history of modern agriculture.”

The interesting thing is that of the top ten growers of GM crops, no fewer than seven – excluding China– are developing nations.  While the USA leads the pack, the next three slots are filled by Brazil, Argentina and India. Paraguay, Pakistan, South Africa and Uruguay bring up the rear, with another eight developing countries in the next ten.  Thus, it is not the First World that is growing the most; it is the countries with the populations that are: the brief makes the point that more than half the world’s population live in the 29 countries growing GM.

However, while Latin American countries are very well represented among the leaders – 9 of the top 20 producers are in South or Central America – Africa has just two:  South Africa, at 9, and the surprise entry Burkina Faso, at 15.  Egypt pegs in at 24th with less than 50,000 ha of crops, which is less than a sixth of Burkina Faso’s total.

The world’s top GM crops are maize, cotton and soybeans, and Africa grows a considerable amount of the natural versions of all of these: according to the FAO information site, South Africa is 8th in maize production, with Nigeria at 10th, followed by Tanzania, Ethiopia, Kenya and Malawi in the top 20; Burkina Faso and Nigeria are bracketed at 13 and 14th for cotton with Egypt 16th; South Africa is 12th and Nigeria 15th for soybean production.

There is far more arable land in Africa than in South America – total land areas of 30 million and 18 million km2 respectively, with 1.946 million vs. 1.046 million km2 cultivated – and populations per km2 are not much different at a low 34 and 22 respectively, so why is productivity so much lower?  Why, then, is uptake of GM also so slow in the continent that could probably benefit the most?

The answer to the first question is mired in a toxic mix of chronic under-development as a result of colonial pasts, past and present politics, and grinding poverty, and is not mine to give.

The answer to the second, however, is more simple: it is mainly due to a mix of political and economic and regulatory inertia, and innate cautiousness about solutions that people are being fostered on them from outside – and in particular, from countries that are not seen to be applying them at home.  A knock-on from the last is that anti-GM activists from especially European countries have exported their campaigns, lock stock and barrel, into the developing world – where politicians have taken notice, and have become even more cautious as a result.  Thus it is, that while the major proportion of both maize and cotton grown in South Africa is GM, and this share is increasing, other southern and central African countries like Zambia have even been reluctant to accept milled GM maize as food aid, let alone to plant it. 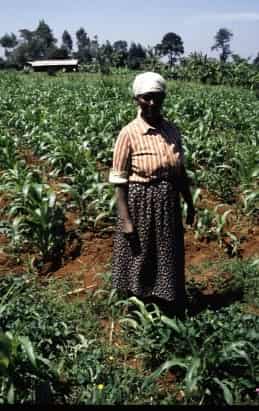 Mrs. Pauline Ruiru, on her farm near Githungiri, central Kenya, standing behind an MSV-infected plant.

Kenya has bucked this trend, however: in 2011 they became Africa’s 4th member of the GM crop club, with publication of regulations governing the cultivation of GM crops in open fields for research and commercial purposes by the National Biosafety Authority.  ISAAA has long had offices in Kenya; there is also a home-grown NGO in the shape of Africa Harvest, which has been very active in advocacy for GM plantings since 2002: their mission is

“…to promote the use of advanced science and technology products to improve agricultural productivity among Africa’s farmers, and free Africans from poverty, hunger and malnutrition.”

Neighbouring Ugandahas also been contemplating legislation that will regulate – and allow – GM plantings.  Crops under consideration are bananas, maize, cotton and cassava: in particular, Uganda is interested in cassava engineered to be resistant to cassava brown streak virus, which is a serious and emerging problem in the country, for which no natural resistance genes are known.  There was also recently news about a successful Bill & Melinda Gates Foundation-funded GM banana nutritional enhancement programme. This was an Australian-led initiative that heavily involved local researchers, and has led to the “golden banana,” or banana which is highly enriched in vitamin A and iron, and will hopefully also be engineered to be nematode-resistant.

There is a common thread running through all but possibly one of Africa’s GM adopters – and that is that local scientists have been involved in developing products everywhere except maybe Burkina Faso, and that the countries involved have put legislation and regulations in place to deal sensibly with GM issues.  This is very similar to the case of Brazil, which was aired in this forum in March a year ago, in a blog titled “Brazil Feeds The World.”  Luiz Antonio Barreto de Castro wrote then that:

“…why did it take so long to see biotech crops released inBrazil? We had a biosafety law in operation since 1995, but literally lost 10 years disputing the judiciary in Brazil, which took sides and made political decisions against science and scientists.

After 2005 everything changed. A new biosafety law stimulated the combination of tropical genetics and biotech so much that Brazil is second only to the US in biotech crop production. We have few plants entirely engineered in Brazil, but Brazilian corporations take advantage of our breeders’ expertise and release the best crops for all Brazilian biomes.”

“There is work to do, but Brazil can make the gene revolution work in the same direction as the green revolution did decades ago, by the hands of Norman Borlaug with more powerful science tools available.”

This is an excellent sentiment, and one that surely applies for other developing nations, too.  There are important lessons for Africa here: first, once the legislation is in place, and regulations enforced, it is possible to apply imported GM technology under your own conditions and under your control.  Second, development of your own biotechnology research community can result in products specific for your country, which owe nothing except in original concepts to the outside world.  An important object example here is the engineering via specific siRNA expression of GM green beans resistant to the Bean golden mosaic geminivirus that was discovered in, and is endemic in, Brazil.

Indeed, my group has similarly attempted to produce a home-grown solution to Africa’s worst viral disease affecting its premier food crop: for some 22 years now, and with only local money, we have been working towards engineering resistance to Maize streak virus, with lab-scale success coming in 2007.  This work may yet fail at the field-trial hurdle; however, what we have done is to lay a foundation of routine maize transformation and regeneration for us and others to make other products – such as plants resistant to fungi, bacteria, and drought, as also mentioned by Luis in his blog.

There has been an increasing tide of positive media commentary recently on the potential of GM crops to improve living standards and help in poverty alleviation in Africa– and good example was this article on the Voice of America web site.  While it is a long and well-reasoned article, one comment from ISAAA Kenya’s Director, Margaret Karembu, struck me forcefully as epitomising the problem:

Which is why Africans don’t want to adopt the technology.

And what were the two articles I’d read that sparked writing this blog?  The first – which was rescued from having been used to clean windows after I frantically phoned home, having forgotten to put it in my work bag – was “Agricultural Technology Grows Food for Africa”, by Ayanda Mdluli in the AgriScope column of our local Cape Times.  While Ayanda is, I think, unnecessarily gloomy about the potential of GM seed growing to negatively impact small farmers, he also has this to say:

“The aim of various ongoing projects in Africa by biotechnologists is to curb vitamin deficiencies and address the gruelling challenge of food security, which will take some time to correct due to infrastructure impediments and policy issues.

Whether we like it or not, the use of biotechnology in agriculture is here to stay, the question is how it will be used by its advocates in their crusade towards creating a productive agricultural industry in Africa that could rival the likes of Brazil and even the US.

Sub-Saharan Africa is destined to be one of the key areas of food production, and with more technological advancements at the centre of the food security agenda, biotechnology may serve as the tool that eradicates the poverty datum line for Africans.”

I could not agree more – which is why I was enthused to write this piece.  And as I was about to start, I saw the second of my inspirations in the shape of this editorial in New Scientist on Golden Rice.  The editors make the point that the opposition to the Golden Rice project – which has no links to Big Agriculture, and has at its heart the prevention of vitamin-deficiency-caused blindness – is essentially dogmatic, and wrong.  Moreover, in the light of evidence that eating just 100 – 150 gm of the rice can provide 60% of the recommended daily intake of vitamin A, the opposition may just be in danger of getting run over in a rush to adopt it.

Which is entirely as it should be, and would be an excellent vindication of an excellent and humanitarian project, long past due time.  And while we’re about it, let’s grow it in Africa!