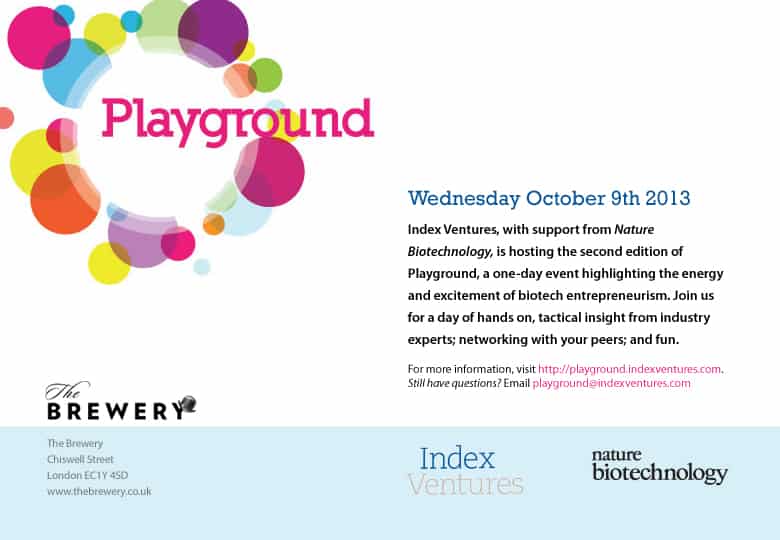 About a year ago, Index Ventures hosted its first “Playground” event in London. (Nature Biotechnology played a supporting role in this endeavor, though Index did most of the heavy lifting.)

We’re putting the event on again, this year on October 9, at the same venue. Again, it’s a one-day affair, aimed at academic researchers who have an interest in commercialization. It’s again free to registered attendees.

Speakers last year included Peter Hecht, Joanna Horobin and Stelios Papadapoulos. Index partner Kevin Johnson also took the stage. (Kevin and Stelios were both guests for a 2011 Nature Biotechnology podcast on funding innovation in biotech, which you can listen to here.)

The room was filled, there was a lot to learn and plenty of information passed around, but at no point did it feel like a classroom. It was a useful, entertaining, well-run event, and those interested in commercializing life science research would benefit from attending.

This year Stelios will again be speaking, and Graham Defries has been added to the lineup. For more information, vist the Playground website. There’s an embedded short video that provides a look back at 2012, and also directions for registering. Follow @playgroundbio on Twitter for updates.

If any readers were in attendance last year, feel free to add your thoughts on the event in the comments section.