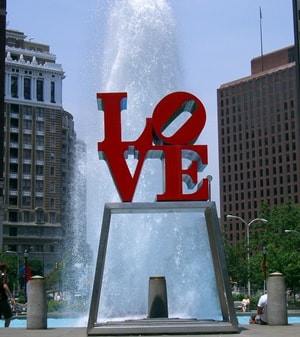 The iconic Love Park in Philadelphia.

The Biotechnology Industry Organization (BIO) International Convention begins next week in Philadelphia. Running from June 15-18 this year, the conference is historically the industry’s largest gathering. The last time Philly played host (2005), the conference was slightly larger than today’s expected version, with more than 18,000 attendees. There were also more protesters than we see today – enough, in fact, for a group to clash with police, leading to, somewhat indirectly, the death of a cop.

Protester activity has declined since then, as has the number of attendees – BIO expects around 15,000 this year. But what about the host city? As we noted in our December 2014 feature on tech transfer, Philadelphia is a becoming a life science town. In 1970, the city had 190,000 manufacturing jobs, but by 2011 manufacturing had dwindled to just 45,000 positions. Jobs in healthcare, education and social services, meanwhile, had risen to 184,000. The three largest employers in Philadelphia now are the Jefferson Health System, the University of Pennsylvania and the University of Pennsylvania Health System, and Temple University.

You could say Philadelphia overall is having something of a resurgence. The city is getting safer – thanks, in part, to a lauded mayor – and there are plans to revitalize more of the city’s downtrodden areas. It has a growing culinary reputation. Perhaps the nickname “Killadelphia” is no longer valid. (To hear former BIO CEO Carl Feldbaum discuss prosecuting corruption in Philadelphia when he was assistant district attorney, click here for our First Rounders podcast.)

And now BIO arrives, with its long list of events. We’ll be posting from the conference this year, and Nature Publishing Group will have a booth in the exhibit hall. Do stop by – ask for a copy of Nature Biotechnology, and grab a piece of whatever candy we’re offering.