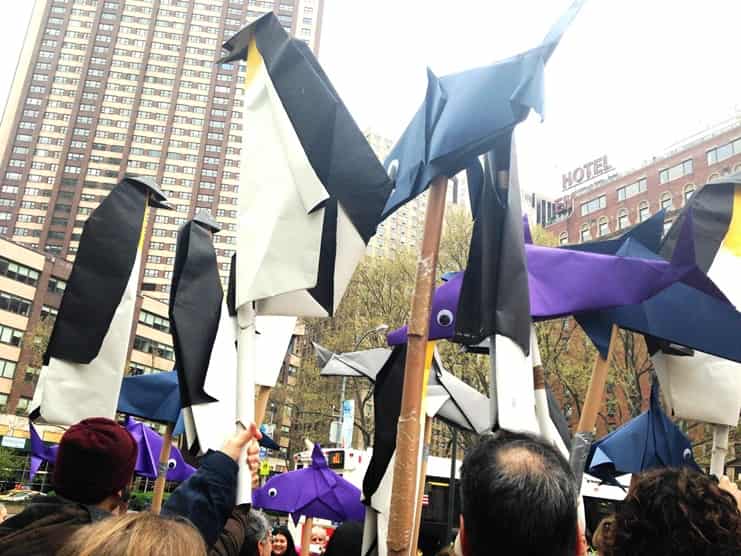 On April 22, organizers pulled off a worldwide March for Science, with large demonstrations in Washington, DC; New York City; San Francisco and many, many other locations. The stated goal was to fight back against a dialogue of scientific misinformation that has permeated national discourse in recent years, and to advocate for “robustly funded” science. In particular, marchers protested proposed budget cuts by the Trump administration against the National Institutes of Health and the Environmental Protection Agency, among others.

The event in Boston featured Decibel Therapeutics President and CEO Steven Holtzman as a speaker. For those unable to attend or marching in other locations, a transcript of his speech in its entirety is below.

Thank you to the organizers of today’s rally and to all of you gathered here today to raise your voices in solidarity and in support of the scientific enterprise.

Over the last 30 years, it has been my privilege to work in the biotechnology industry.

Biotechnology owes its existence to advances in fundamental, basic science. Our industry’s role in society is to transform the revolution in the life sciences into innovative new medicines to address unmet human needs and to save and improve the quality of human life worldwide.

Today, we find ourselves in a time when science and its practitioners are under siege.

An assault on science is an assault on the future of the biotechnology industry. We can only continue to harvest basic science and convert it into new medicines if it is renewed and nurtured.  Hence, pragmatically, it is in our industry’s self-interest to advocate for support of the basic sciences.

However, that is not my main point in speaking to you today. The leadership of the biotechnology industry has a much deeper set of reasons to raise our voices in opposition to anti-science rhetoric and policies.

Modern scientific inquiry is founded on grounding principles, among which is the belief that the quality of the data, not the economic, political, religious, or physical power of their proponent, should determine their authority. We share a conception of standards of evidence and argumentation for the existence of a fact. This conception of scientific inquiry does not admit of so much as the concept of an alternative fact, much less the existence of one.

Perhaps not so obviously, however, intrinsically bound up with this conception of rational, scientific discourse, are the ideals of equality of participation and justice. As citizens, we all have an obligation to contribute to the conditions that enable the creation of a community of open discourse involving everyone with something to contribute – regardless of skin color, ethnicity, religious belief, country of origin, gender or sexual orientation. Excluding any voice from that community on such a basis is repugnant to the rationality that undergirds the scientific endeavor. It is the moral equivalent of excluding data that potentially contravene conventional belief. That community of open, reasoned discourse is essential to the quest for truth as best we can know it, whether in science or society.

These scientific and societal ideals are threads woven together in a glorious tapestry.

Pull out one thread and the whole begins to unravel.

Conversely, anti-science views, such as those espoused by some on creationism, vaccination, and climate change, are equally bound up with expressions of misogyny, racism, religious intolerance, and other shameful bigotries.

Anti-science rests on the authority of the powerful, not open rational discourse, to carry the day. Bigotry is about the systematic exclusion from the discourse of a subset of those with rationally and respectfully held competing views.

This, too, is a tapestry of intertwined threads. Do not think it possible to approve, or even quietly disapprove of but countenance, one without thereby endorsing the other.

Thus, the modern biotechnology enterprise is an industry with noble origins not just in science but also in the advancement of the social preconditions necessary for an open society and polity to flourish. These dual ideals are the bedrock on which biotechnology is built. They compel us as an industry to lift our voice in unwavering support: for the advancement of science, yes, but also for the freedom of all with something to contribute to participate in the discourse. Without both, our quest to transform basic research into meaningful new medicines will wither and die.

Thank you for standing with us today, together raising our voice in solidarity and support of these intertwined ideals: of rational scientific inquiry and of social justice.