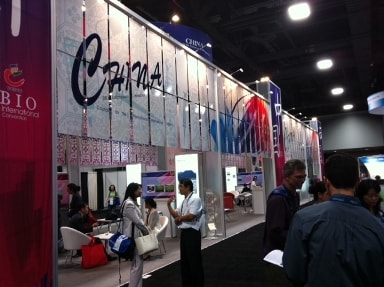 Even if the total numbers of attendees at BIO is down from its peak, it’s still an incredibly large gathering of diverse people across the biotech spectrum. The exhibit hall is a good reflection of that. I can remember when the hall was just a collection of simple individual company stands – a few employees in a booth, a poster hanging behind them.

But as the industry grew, the exhibitors changed; the first sign was a marked increase in law firms, because once it was clear how valuable IP is to biotech, biotech became valuable to lawyers. (That’s not cynicism – lawyers play an important part in biotechnology, as this article and this article illustrate.)

The second change was the amount of state and international exhibitors. The ‘booths’ of yesteryear are now huge country pavilions, like the massive structure built by China.

And why not? BIO is a perfect place for countries to trumpet their goals and successes, with high traffic in the exhibit hall and captive audiences in the panel sessions. I sat in on a series of presentations from South Korea yesterday, and the most interesting tidbit (for me) was its stance on biosimilars: it wants to own 22% of the global biosimilars market by 2020. That’s aggressive, but Choi Kyung-hwan, the minister of knowledge and economy in Korea, said that when Korea’s pharmaceutical generics division got up and running, it settled for the local market, and thus Korea feels it missed an opportunity. It does not plan on repeating that mistake with biosimilars, and plans to have the best biosimilar offerings across the board and go global.

So far that plan is working, if the Merck – Hanwha Chemical deal earlier this month is any indication. They signed to develop and commercialize a follow-on Enbrel (etanercept) after Merck searched for the best version around and settled on Hanwha. (Enbrel’s patent is set to expire fall 2012.)

That’s South Korea, though – a fairly established biotech player with a suggested 42 therapeutic biotech firms. On the other end of the spectrum is Mexico. In its session, there was less to discuss. One speaker basically outlined the market potential for pharmaceuticals in Mexico — $11.2 billion, which ranks them top 50 overall in the world and the largest in Latin America.

But paying customers is not a biotech base. Mexico does offer Instituto Bioclon, which is producing anti-venom ‘fabotherapics,’ and Silanes, which makes pharmaceutical diagnostics and diabetes drugs. And it has INMEGEN, the National Institute of Genomic Medicine in Mexico. But overall, biotech in Mexico is very young. In the Q&A part of the session, a representative from Concert Pharmaceuticals asked what I thought was a very interesting question: he pointed out that the massive layoffs in pharma and biotech have left a lot of qualified individuals out of work; has Mexico considered bringing some of them south of the border to help set up a nascent industry?

The panelists hemmed and hawed. A representative from the Federal Commission for Protection of Sanitary Risks (the FDA of Mexico) said, No, Mexico was looking to keep things local. That didn’t seem to sit well with the audience or the other two panel members, who in their responses were quick to suggest that talent is talent and Mexico is open to anything.

That ended the session, but I was a little confused by their answers, so I went to panel member Carmen Alvarez-Buylla (she works at INMEGEN), to get her to clarify Mexico’s stance. This seemed like a no-brainer to me, I said. If there are available, seasoned biotech vets who can help, execs who know VCs and who have built companies before, why not hire their services?

She agreed in theory that this could work, but said Mexico is “not there yet.” Yes, there is research happening; and yes, INMEGEN and others are collaborating with universities; and yes, Mexican researchers are actively looking to publish papers in major journals. But there is no universal tech transfer policy in place in Mexico, she said, and there are no rules for royalty sharing.

Without any of that, it’s simply too early to consider building anything.