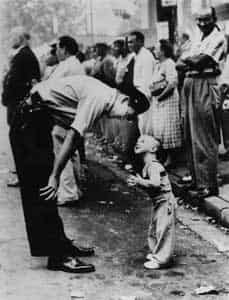 I haven’t had a chance to mention this yet, but Monday night’s reception at the Newseum was packed, pretty loud and interesting. The most memorable thing for me was the exhibit on Pulitzer Prize winning photographs.

The images are haunting. You don’t receive the Pulitzer for pictures of kittens dozing among tulips. Winners included images of an execution in Saigon, Kosovo refugees passing a baby over barbed wire, and the reaction of students amid the Columbine massacre here in the US. Each picture seemed to show either an attempt to end a life, or efforts to protect/save one, so they stick with you. The picture at the top of this post won the Pulitzer in 1958, and was one of the sweeter photos in the exhibit.

Back to biotech. I had a meeting scheduled this morning with Francesco De Rubertis, to catch up and talk about the industry. He’s a partner at Index Ventures and was lead author on a Bioentrepreneur article a few years ago that focused on how to build a sustainable biotech company. (You can read that article here.)

Even before he was a venture capitalist, Francesco was concerned with turning research into products, and he thinks it’s important for scientists to adopt that business mindset. He himself moved right from academia to the VC side, because he felt building healthcare companies is one of the most direct ways to impact humanity. There’s a chance we’ll do a podcast later for the Meet the Author section of Bioentrepreneur.

I also spent some time milling around the country pavilions in the exhibit hall, talking with emerging biotech communities. I walked away from the Czech Republic booth with a CD database of the country’s biotechs. Overall, it shows 39 biotechs, and 308 ‘research entities.’

The survey breaks biotech down into categories: nanobiotechnology, bioinformatics, gene and RNA vectors, cell and tissue culture engineering, proteins and other molecules, process biotechnology techniques, DNA/RNA and ‘other.’ And the biotechnology itself is broken down into applications, such as human health (large molecule), human health (other), industrial processing, GM agricultural biotechnology, and the like. I won’t bother listing them all here, in the hopes of keeping this readable.

The CD lets you slice and dice all you want, and you can get some interesting looks. There are 15 companies focused on large-molecule human health, but only one focused on GM agriculture. (Given the attitude on GM crops in Europe, this makes sense, no?) There are eight companies that include ‘animal biotechnology’ in their description. There are two bioinformatics firms, and 13 focused on cell and tissue engineering.

Filtering will also give you an idea of the largest area of focus for Czech researchers, and where they are. There are 16 companies focused on DNA/RNA, and there are 160 research entities also investigating that category – both the largest percentage. And not surprisingly, most of the work is being done in Prague, Czech Republic’s largest and most populated city. Which means that a typical Czech biotech scientist, whether publicly funded or private, is in the DNA/RNA field and living in Prague.

There. I’ve neatly boiled down the entire CD to one sentence.