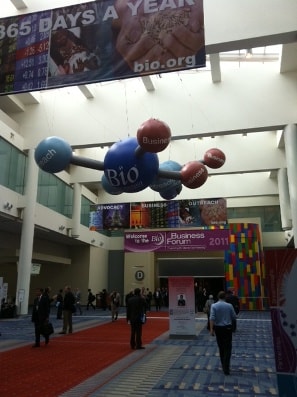 Day 1 of the BIO convention. The Walter E Washington Convention Center is a huge thing, split into two sections. Panel sessions run on both sides, and the exhibition hall (opening Tuesday) is below ground, spanning some great distance underneath it all. There are hundreds of rooms and people scurrying all over, yet I spent my first hour huddled in a quiet spot along a deserted corridor on the ground floor, talking to an Argentine. He’s working at the interface of science and research, helping Argentina recognize it can not only do routine biotech research, but also produce vaccines, antibodies and diagnostic kits right at home. He admitted that the science itself might not be new or groundbreaking, but translating that science into homegrown Argentine products is, and it’s been an important step. He’s put together a company (IncuINTA) to help facilitate the process. We talked about his background and the plans for IncuINTA, and in general, he’s just the type of person global biotechnology needs – gregarious, focused and passionate. You can find out more here.

Also spoke with Maxwell, a biotech venture fund focused on Russia. They have five portfolio companies now, though they also help non-Russian firms establish clinical trials in Russia. As a BRIC country, Russia is already considered an economy to watch, and it’s growing its biotech sector, too. Russia launched a program to help foster cooperation between the private sector and the government, and they’ve done that in the usual way – establishing economic zones for biotech, developing technology parks and by setting up venture funds like the Russian Venture Company. This has resulted in a few biotech clusters popping up.

We’ll have to wait and see what becomes of that concerted effort, because as much as every state in the US wants a biotech cluster, and nearly every country in the world wants to grow the industry in its backyard, it’s becoming less clear that this can be forced.

I sat in on an afternoon session titled “Taiwan: Post ECFA Era-Opportunities for Global Biomedical Market.” It turned out to be quite informative. Taiwan has 66 drug candidates in clinical trials, and it was the first country in Asia-Pacific region to introduce a venture capital industry. Taiwan’s Minister without Portfolio, Chin-Yi Chu, said Taiwan ranks third in the world in entrepreneurism, behind the US and Israel, and he said Taiwan ranks No. 1 in the world in patents per capita. (A good journalist would have spent the afternoon fact checking those statements; I did not.)

A strong VC presence is key for fueling a burgeoning biotech sector – that we know. And patents help protect research and investments. But Taiwan serves as a good example of how difficult growing biotech can be. First off, all those patents filed in Taiwan tend to be incremental, rather than pure innovation. And Chin-Yi Chu pointed out that in Taiwan, a professor is a desired, respectable position; a business person much less so. In fact, the pursuit of money is considered a rather vapid calling in Taiwan. (This is not a problem in the US, for better or worse.)

But perhaps the biggest strike against Taiwan is a lack of translational research. There is no collective mindset that envisions products from research. And if biotech is to drive the future economies of countries around the globe, there has to be nationwide efforts to turn academic research and publicly-funded lab work into something that can benefit patients and be sold. We’ve talked about it before on this blog – getting that mindset into the universities and researchers is hard to do. I’m not quite sure how to do it, but it’s proving a lot harder than convincing the government to throw a few millions at a biotech park.