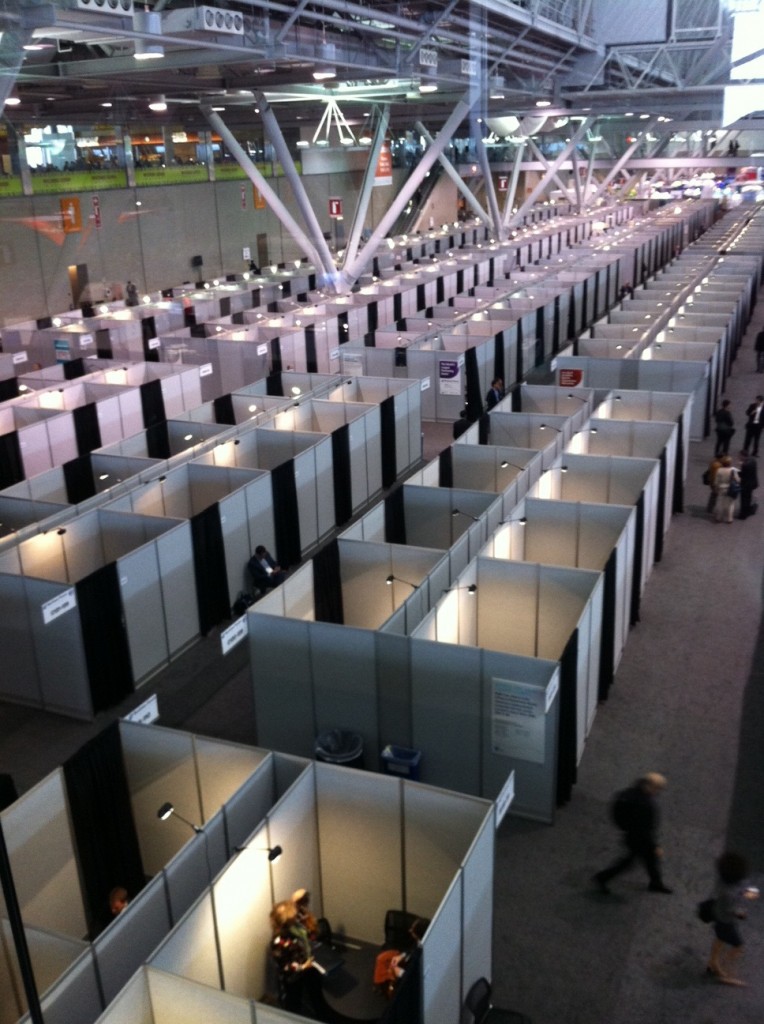 Day 1 of BIO Convention.  The picture is from above the business partnering section of the conference, located alongside the exhibit hall.  Scores of rooms, and plenty of people putting them to use.  BIO offers many things – panel sessions, keynote speakers, receptions for mingling and, this year, the sights of Boston.  But much of the lasting benefit of BIO comes from those meeting rooms, where the drug discovery partnerships of tomorrow often begin.

I had a few (non-partnering) meetings of my own, but I managed to get in a quick panel session or two, including one from the international case studies track, exhaustingly titled, Transferring Know-How to the Market: How Have Current Changes in the Legislative Environment and Developments in Alternative Support Mechanisms Influenced R&D and Bio-Tech Activities in Turkey

Much of the presentation aimed to show the size of Turkey’s healthcare market. A Powerpoint slide titled “Investment opportunities,” detailed the recent and anticipated future spending on healthcare in Turkey.  In 2009, it was $39.9 billion.  That moved to $48.6 billion last year, and is expected to swell to $83.6 billion in 2016.  Turkey was billed as a “safe” location that provided access to Europe, Africa and Asia, and panel members pointed out that reimbursement isn’t much of a concern, as the government pays 85% of all drug bills.  All this, it’s assumed, might entice pharmaceutical companies to invest in Turkey via manufacturing facilities and distribution centers and the rest.

Turkey has growth goals, though, and the panel laid them out.  In 2011, Turkey was a net importer of pharmaceutical products, to the tune of $4.1 billion.  But by 2023, it hopes to be a net exporter, at $1 billion.  But where Turkey is lagging is in innovation, and that is the doorway through which walks both new benefits to patients, as well as the premium pricing those benefits can command.

The industry R&D spend in Turkey is just $50 million annually – in other words, about 1.5% of what Amgen spent on R&D in 2011: ~$3.2 billion.  The government invests more than $1 billion annually into academic research and startups through a program similar to the SBIR grants in the US, but with the expense of drug development, this number will have trouble powering the change Turkey is looking for.

Turkey knows this. While the “national desire” to become an innovator on the world’s biotech stage is there, said Gokhan S. Hotamisligil, panel moderator and the scientific founder of Syndexa Pharmaceuticals, the remaining challenge is “restructuring academia” to encourage it.

How that will be done wasn’t made clear, and it’s a Herculean task, one that can’t be completed simply with money and tax incentives (I’ve discussed this before while at BIO).  The good news is that Turkey isn’t sticking its head in the sand, and if Turkey wants to address that problem, the first step is recognizing there is a problem.