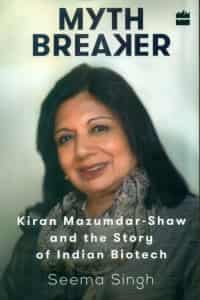 Mythbreaker: Kiran Mazumdar-Shaw and the Story of Indian Biotech

Although I study the biotech industry, and mostly startups, I didn’t know the full story behind Mythbreaker. There will be many parts of the book new to other readers too, as the author, Seema Singh, has done some fantastic digging. What emerges is that Kiran Mazumdar-Shaw, the focus of the book, has beaten by a long shot the odds of a first-generation woman entrepreneur. She has also beaten (again, by a long shot) the odds against succeeding in India in a highly technical area.

The book can loosely be divided into three parts. In the first, we get the story of Kiran herself. The second gives us the evolution of Biocon, India’s largest biotech company. The third part is the growth of Indian biotech in general and its ecosystem.

It is clear that Kiran is hugely self-confident, tough, down-to-earth, tireless, ambitious, adventurous, resilient, unconventional, highly intuitive, a risk taker and a go getter with chutzpah. Here are a couple of stories from the book: Once, in the early days of Biocon, Kiran had to take a train journey.  The doors of the compartment were jammed full of people, but she needed to make that train and had family members and co-passengers “push and pull” her through a window. Second, around 1990, Kiran made a presentation to the much larger firm Unilever, and laid out three types of companies: those that make things happen, those that watch things happen, and those that wonder what happened.

Biocon is the first type, she said. Unilever the third.

Somebody once told me that when Kiran wants to cook a novel meal, she makes sure that the dal–roti is ready in case the thing flops. So her risks are calculated, but nevertheless, she’s taken big risks. Still, the book is light on material from Kiran’s life, and Biocon’s evolution fills the pages.

It is indeed an incredible story. To start in a garage with an apron on, personally handling fish maws, and progress to a point at which Pfizer, the largest pharma company in the world, pays you a $200 million upfront in a partnering deal is impressive. This journey is recounted in this book with enough detail as to be educational.

The book also covers the industry itself. I live in Bangalore, which is also where Biocon and the author Seema are based. We Bangaloreans like to assert that the city is the biotech capital of the country. I have personally seen how many high-tech start-ups there are in the city now. Kiran has been the force behind many of the initiatives that have supported them, especially – but not solely – in Karnataka.

This section also includes the galling comment by Charles Cantor, at Columbia at the time: “Indians are good at learning [science] but they don’t deliver.” Certainly Kiran delivered in India, and so have others. It is not at all certain that Cantor would have, and it’s certain he has not faced the manifold difficulties that our entrepreneurs have faced.

Mythbreaker is a must read for anyone interested in the Indian biotech industry, or part of any course on biotech entrepreneurship in the country. A sequel needs to be written, about 15-20 years from now. I hope Seema takes up this project. She knows the background to the story that is currently unfolding and the thoroughness to dig up all that is needed to tell a compelling story and the ability to hold our undivided attention.