New Drug for an Age-Old Disease

At the end of 2012, the US Food & Drug Administration approved Sirturo, also known as bedaquiline as a viable treatment option for patients with drug-resistant strains of tuberculosis.  This was an important announcement for the TB drugs community as the last drug with a new mechanism of action approved for TB was rifampicin in 1963. Innovation in tuberculosis drugs and antibiotics in general, since then, has languished.

Unlike other bacterial infections that can be cleared within a few days/weeks with a short course of antibiotics, tuberculosis requires a lengthy chemotherapy regimen of rifampicin and isoniazid, supplemented with pyrazinamide and ethambutol[1].

Strains of M.tuberculosis bacteria that are resistant to at least one or more of the standard first-line antibiotic treatments are defined as multi-drug resistant TB (MDR-TB). The standard treatment will not cure patients with MDR-TB.   Expensive second line drugs have to be used with lower levels of efficacy, more toxic side effects and a longer treatment regimen.  The MDR-TB treatment regimen extends to two years and on average costs $5000/patient[2].  Drug resistance severely threatens the millennium development goals and infectious disease control of TB as it may return the world to an era where drugs are no longer effective.

What surprised me on the press releases and news articles announcing the Sirturo approval was the clear admission by Johnson & Johnson that the Sirturo “commercial opportunity is very limited.” As the following diagram shows, TB is predominantly a disease that affects low and middle-income countries. However, there may be other value created for J&J that are not directly tied to top-line Sirturo sales. 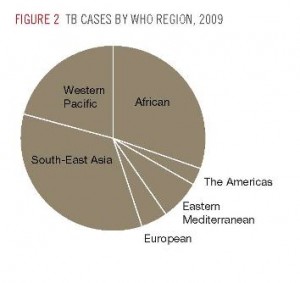 In the research & development process for Sirturo, management would have considered additional joint value propositions of a novel TB drug offering. For example, the successful commercialization of Sirturo for J&J can potentially win them a Priority Review Voucher (PRV) from the US Food & Drug Administration.  PRVs are administered by the US FDA and designed to encourage development of new therapeutics for prevention and treatment of tropical diseases including TB.  If a PRV is granted to J&J, it entitles the pharmaceutical firm to speed up the FDA regulatory process on another drug candidate from its portfolio. Economists estimate that the priority review can shorten the review process by 7-12 months.  With the faster time to market and increased sales under patent protection, the voucher can be worth between $50million-$500million USD to J&J.

Second, the downstream delivery and sales of Sirturo to emerging markets can open new distribution channels and relationships in developing countries.  This would potentially allow Janssen Pharmaceuticals, as a subsidiary of J&J to further open its entire product portfolio to new markets.

Sirturo offers hope to the approximately 450,000 MDR-TB patients each year with a new efficacious mechanism of action and shorter regimen.  It is difficult to model how much innovative pull incentives such as the FDA priority review voucher scheme or generation of goodwill impacted the development timeline for this Sirturo, but there is no question that it helps address a public health issue that has for too long only had limited options.