Aggregate value to Brazil’s agribusiness – or else 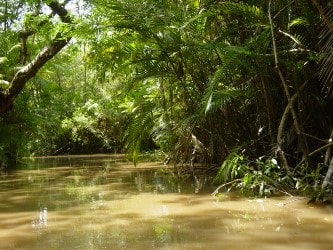 Brazil needs to both increase crop yields and protect natural resources such as the Amazon.

A Science editorial quoted the Food and Agriculture Organization as saying that the challenge of “lifting a billion people out of poverty and feeding an extra 2.3 billion by 2050” will require “increasing cereal production by 70%, doubling the output of developing countries.”

Jeff Tollefson, in a Nature article titled “The Global Farm,” emphasized the growing role of Brazil in food production but questioned if Brazil can continue to make agricultural gains without destroying the Amazon. The Economist called attention to “The miracle of the cerrado” – acidic savannah soil conquered for agriculture in Brazil.

Indeed, if Brazil is to be a key player in feeding the world, then it must do so with the Amazon and the Cerrado carefully in mind. During the last two-and-a-half decades, Brazil has destroyed an area of the Amazon rainforest as big as Germany. The Cerrado we knew 50 years ago, when Brasilia became the capital of Brazil, has just 17% of its original vegetation left.

Can Brazil increase production and be a good shepherd to these areas? There are signs to suggest we can. Since the ’60s, Brazil has doubled its grain production every twenty years. This was done without substantially increasing land usage by implementing plant breeding – performed by a dozen good geneticists – and by putting in place seed and plant breeder’s laws. It was done because the largest six multinationals corporations have invested in Brazil: Dow, Dupont, Syngenta, BASF, Bayer and Monsanto. And it was done because the regulatory system, particularly the Biosafety and Cultivar laws in Brazil, facilitates the relationship between expert breeders for tropical plants and the corporations that have genes available. Thus, 30 million hectares of biotech soybean, corn and cotton are cultivated in Brazil – second globally to only the US. Can we double it once more in the next 20 years without destroying these precious biomes?

It will be difficult, but it is possible – Brazil has trained tens of thousands of students, in-house and abroad, and has already seen its world scientific output jump from 0.4% in the ’70s to a current level six times higher. This is faster growth than even our soccer, for which we are renowned – we won the World Cup five times, but it took us 55 years to do that. Applying our increased scientific capabilities in ag-biotechnology is our best hope to continue to increase output and protect our natural resources.

Our success raises an important question: Why isn’t similar innovation happening in Brazil’s pharmaceutical sector? The answer is partly because the large pharmaceutical corporations – Abbott, Pfizer, Merck, etc. – do not invest in Brazil. These firms claim that Brazilian patent law is restrictive, and that access to the huge biodiversity of Brazil is denied by the regulatory system in effect. Unless this regulatory system is modified to attract investments from abroad, innovation in the pharmaceutical biotechnology sector will have to wait.

Meanwhile, The Royal Institute – the only institute capable of performing animal preclinical trials in Brazil – was invaded by activists in October. Close to two hundred genetically selected beagles were stolen, and all the rodents. The activists damaged the insides enough that the Royal Institute was forced to close. Public authorities, well aware that it is impossible to develop drugs without preclinical tests in animals, have not pursued these criminals.

That’s not to say that Brazil has not made progress in the pharma realm.  In the past decade, it has invested heavily in “genericos” – copies of approved chemical drugs. Last year, this sector of the pharmaceutical industry grew 14%. But Brazil has never registered a molecule with the FDA or EMEA – quite the opposite: last year it imported $12 billion of biologicals to supply its SUS with drugs. These companies import active principles to fill, finish and sell.

The Brazilian-funded pharmaceutical sector is now investing in biosimilars: copies of biological molecules with expiring patents. This should be a large market – tens of billions of dollars – and of course will be on the agenda of Big Pharma. Can we compete here?

I doubt it. Our investment is very limited – our entire sector is worth less than 15% of Pfizer’s value. We also have to compete with South Korea, India and China, who are more experienced than we are at expressing genes in bacteria, yeast and mammalian cell lines, as many intend to do. Instead of lining up against these countries to compete with Big Pharma, we should aim to express genes in the milk of mammalian animals, such as rEVO Biologics is doing in Boston, or use plants as biofactories, like Medicago is doing in Canada, producing vaccines for H5N1 in six weeks using tobacco plants.

Brazil has to do better. We need to bring in value through our agribusiness and then apply it to pharmaceuticals. Brazil could be leader in the production of Heparin. Brazil could improve the meat of Nelore by marbling it.