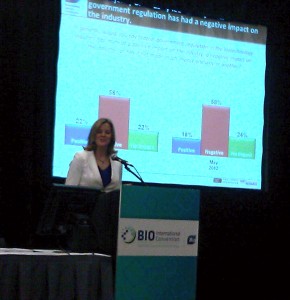 At a press conference Tuesday morning, BIO announced the results of three surveys that showed a continuing optimism about the state of the biotech industry, from industry leaders, US voters and BIO 2012 attendees. Geoff Garin of Hart Research Associates summarized the outlook among industry leaders: 63% are still optimistic about biotech’s future prospects, compared with 79% when the same question was asked in April 2007. Leaders cited the difficulty in attracting private financing as well as the lack of tax incentives from government as their main challenges. As might be suspected, convention attendees were even more optimistic about the state of their industry, with finding cures for chronic diseases such as cancer, Alzheimer’s Parkinson’s, HIV/AIDS and diabetes, and improving the economy being the most important drivers.

A telephone poll of 800 registered US voters yielded more surprising results. Even if the average American was not familiar with the industry, just a brief description of what biotech companies do caused a massive boost in favorability, from 44% to 83%. A majority (56%) of voters supports government help for the industry, either through streamlining regulations, enacting tax incentives to encourage private investment, or direct investment in biotech companies. Surprisingly, given the country’s economic climate, this viewpoint held across party lines with Democrats, Republicans and Independents voicing support for increased government support for the industry. Voters ranked finding cures for diseases just behind jobs and the economy in terms of importance. Other aspects of biotech, such as biofuels, agriculture and pollution were seen as only slightly less important, according to co-presenter Alex Bratty of Public Opinion Strategies (pictured above).

All in all, the numbers were heartening and should give those of us who work in biotech a morale boost. Said Garin, the average person right now is thinking, “How do we get out of this mess?” and at such times, one of the groups people look to for answers are scientists.  With already a solid record of achievement behind us and public support on our side, here’s hoping for more answers in the future.

A complete summary of study findings can be found here.