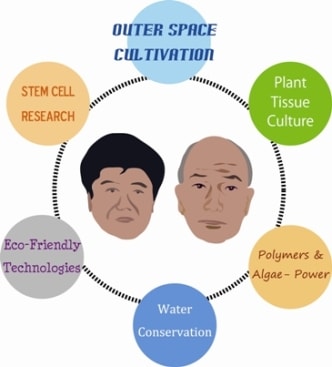 It’s not always sunny for start-ups in healthcare biotech. And when the weather gets bad, one should either go dormant or find places with the right climate.  We can learn this lesson from Prof. Yuichi Mori and Dr. Hiroshi Yoshioka, the polymer-biology duo from Waseda University, Japan.

When Yuichi Mori set up his lab for polymerization-related work in Tokyo, his only asset was a knowledge of monomers and their polymerization. He was able to secure help from another technocrat, Hiroshi Yoshioka, who had several ideas on polymerization, based on certain algorithms that worked paradoxically, like the hydrogen-oxygen combination that makes water. Hydrogen and oxygen are both flammable, but when they are combined as H2O they produce water, which works as a fire extinguisher! Similarly, several cytotoxic monomers, when polymerized, become cell friendly and could allow even some of the most difficult cellular organisms and explant cells from tissue to grow in the lab! This was the eureka moment, as their scaffold could grow stem cells at a time when the entire world was investigating stem cell research. But the joy was short lived as they realized their invention would need huge investments in time and money to become a success.

That’s when they began to look at things differently. They looked into cells of animal and plant origin both in the same platform. They found that the cell-friendly polymer had a great water conservation capacity, and their focus shifted to agriculture. This has earned them revenue, and it has also kept their other researches progressing. Using their technology, dry farmland in Arabian deserts has started producing strawberries and tomatoes!

Apart from plant cell biology and water conservation products, their company now is into:

And above all, they have even sent their products to outer space, in collaboration with the Japan space research Agency (JAXA), to study the feasibilities of cultivation of high-end plants beyond the earth’s atmosphere. Their success is due to their flexibility to adapt to change, pragmatic decisions and a technology that was multipotent. Had they kept themselves tied to only the healthcare option for using their technology, it’s possible they would not have flourished.