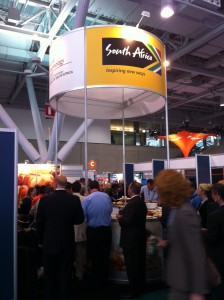 South Africa recently claimed a victory. In May, it won the right to host the world’s biggest radio telescope. The $2 billion project, said Derek Hanekom, Deputy Minister of Science and Technology at BIO’s ‘The BRICS and Beyond’ special session (June 18) sent out a  sign that the country has left behind its troubled past and is ready for business. Beyond astronomy, and its azure skies, South Africa is a market poised for growth and a gateway to the rest of the continent.

Over the last 20 years, the government has embraced “innovative thinking,” said Hanekom. While addressing poverty issues, and providing help for the 5.6 million people who are HIV positive, the state has come up with game plan to spur the economy. South Africa, as most other BRIC countries have done before, is embracing the idea of a Bioeconomy as an engine for growth. The state sees potential in genetically modified crops for pest and drought resistance and grasses as cellulosic material for second-generation biofuels. Exploiting algae is also high on the agenda, in the short term, as a source of protein for animal feed, and in the long term as a biofuel.

In healthcare, the state is prepared to lend more than a hand to fledgling companies. Plans to support biotech growth were set in motion in 2002, when the government’s Technology Development Agency set aside a 500 million Rand (US$60.8 million) technology development pot per year, 200 million rand (US$24.4 million) of which is dedicated to the biotech sector. “It may not seem much by US standards, but compared to other African countries, it is significant,” Sibongile Gumbi, group executive for the biotechnology sector, at the Technology Innovation Office said at a press conference also at BIO.

South Africa’s biotech drive is such that the state is willing to incubate, support development, and even commercialize any product that makes it to market—whatever is needed. Currently small and medium enterprises (SMEs) include biopharmaceuticals, phytopharmaceuticals and diagnostics. “We’d like to get into vaccine development,” said Gumbi. One South African drug discovery company, Ithemba, in Gauteng, is an SME dedicated to discovering inexpensive therapeutics for infectious diseases through synthetic and medicinal chemistry. With support from the state, Ithemba is running a tuberculosis program in partnership with the University of Georgia in the US.

The government is also keen to attract outside companies to manufacture locally. “South Africa benefits from strong IP laws,” said Gumbi. “It is also a way for us to gain knowledge. If we were able to attract biomanufacturing expertise, that will be of significant benefit to our sector.