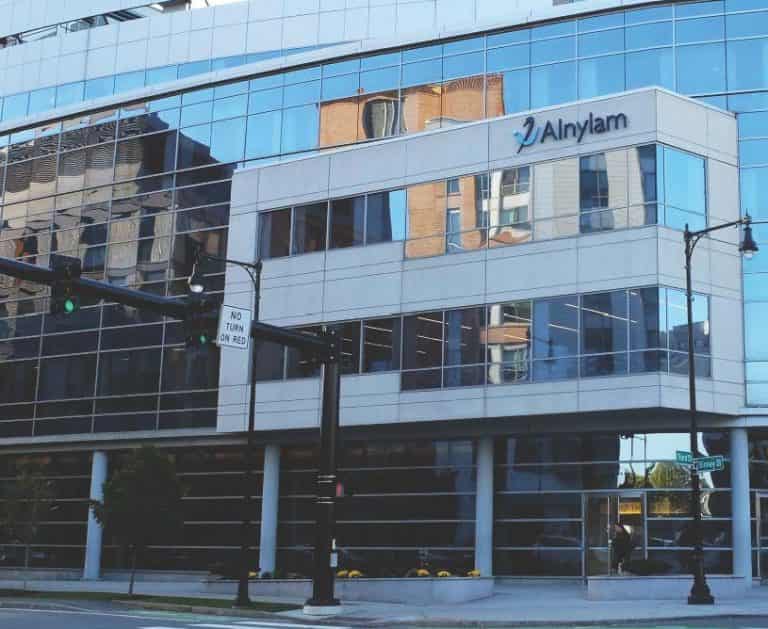 On August 10, the US Food and Drug Administration approved the first RNA interference (RNAi) therapeutic, a treatment for polyneuropathy caused by transthyretin (TTR) amyloidosis from Alnylam Pharmaceuticals. The go-ahead for Onpattro (patisiran) sees the RNAi field clear an approval hurdle considered unlikely as recently as six years ago, when pharma exited the RNAi field en masse. The US approval, with Europe expected to follow by early September, is “a major milestone,” says Anastasia Khvorova, an RNAi researcher at the University of Massachusetts in Worcester. Onpattro has an excellent safety record, but there are lingering concerns about potential long-term toxicity from newer, more potent RNAi therapeutics. And the field as a whole still faces investor skepticism in the wake of a decade of clinical trial failures.

But Onpattro could prove a very lucrative drug for Alnylam, the clear leader in the RNAi therapeutics field. Transthyretin amyloidosis “is an inexorable decline to death,” says Morie Gertz, a hematologist at the Mayo Clinic in Rochester, Minnesota. “You either have a liver transplant or hope for the best.” Onpattro, in phase 3, met its neurologic endpoint, with 56% of patients showing improvement at 18 months, compared with 4% of patients on placebo (New Engl. J. Med. 379, 11–21, 2018). Before approval, Goldman Sachs analyst Terence Flynn projected $1.8 billion in peak sales. Alnylam is pricing Onpattro at $450,000 average list, dropping to $345,000 after taking into account mandatory discounts for eligible health care organizations. Alnylam is also negotiating discounts in cases where individual patients don’t do well on the drug.

Onpattro is a 21-mer double-stranded small interfering RNA (siRNA) oligonucleotide containing 2´–O-methyl modified and unmodified ribonucleosides, with 2´-deoxythymidine dinucleotide overhangs at the 3´ ends, which is encapsulated in a cationic amino MC3 lipid nanoparticle comprising (6Z,9Z,28Z,31Z)-heptatriaconta-6,9,28,31-tetraen-19-yl-4-(dimethylamino) butanoate (DLin-MC3-DMA) plus cholesterol, 1,2-distearoyl-sn-glycero-3-phosphocholine (DSPC) and á-(3´-{[1,2-di(myristyloxy)propanoxy] carbonylamino}propyl)-?-methoxy polyoxyethylene (PEG2000-C-DMG). Close behind is another type of oligonucleotide drug, a single-stranded antisense molecule from Ionis Pharmaceuticals and its affiliate Akcea Therapeutics. Ionis’s Tegsedi (inotersen) is a 20-mer with five 2´-O-methoxyethyl-modified ribonucleotides at each terminus, a central region of ten 2´-deoxynucleotide residues, a full phosphorothioate modified backbone, and all cytosine residues methylated at position 5.  It recently completed its own successful phase 3 trial (New Engl. J. Med. 379, 22-31, 2018). With either drug, “you can slow and in some instances actually reverse the disease,” says Gertz. “It’s a big deal.” Analysts’ projected sales, however, assume strong market preference for Onpattro. The Ionis drug, which caused thrombocytopenia and kidney toxicity in some patients, such that all will require platelet monitoring, received European approval July 11 and has a Prescription Drug User Fee Act date with the FDA of October 6.

Both Alnylam’s and Ionis’s drugs prevent TTR mRNA translation into the transthyretin protein. Transthyretin normally forms tetramers, but in the hereditary form of the disease mutant monomers are released and misfold into amyloid fibrils, which accumulate in the nerves, heart and other tissues. By depleting both wild-type and mutant transthyretin mRNA, Onpattro (and Tegsedi) can arrest disease pathology. Single-stranded antisense binds directly to target mRNA for cleavage by RNase H or occupancy, whereas double-stranded small interfering RNAs (siRNAs) engages the RNA interference silencing complex (RISC), which directs target cleavage. In general, antisense has better cellular penetration properties, whereas siRNA is more potent intracellularly.

A wild card in the battle for market ascendancy is Vyndaqel (tafamidis), an oral drug from Pfizer in New York that works by stabilizing the normal transthyretin tetramer. The European Medicines Agency approved Vyndaqel for hereditary transthyretin polyneuropathy in 2011 (Nat. Biotechnol. 30, 121, 2012), but the FDA failed to follow suit, requesting a second efficacy study. In March 2018 Pfizer announced topline phase 3 results for Vyndaqel in transthyretin cardiomyopathy, another presentation of TTR amyloidosis, which exists on a spectrum. Vyndaqel met its primary endpoint, with the company expected to present full results at the European Society of Cardiology Congress in Munich at the end of August. Alnylam’s stock traded 36% lower in July than in March, a drop that Needham & Co. biotech analyst Alan Carr attributes to the Vyndaqel uncertainty. “We’re all very interested in seeing these data,” Carr said.

Alnylam CEO John Maraganore views Onpattro as the winner in TTR amyloidosis with polyneuropathy. “Tafamidis, based on previous studies, slows down the progression of neuropathy in patients with the disease, but it doesn’t really halt it,” he says. But patients with hereditary TTR amyloidosis with cardiomyopathy, as well as with wild-type TTR disease—in which TTR amyloid slowly deposits in the heart—might be different. Alnylam has aspirations for its second-generation TTR amyloidosis drug, ALN-TTRsc02, which tethers the siRNA molecule to multivalent N-acetylgalactosamine (GalNAc) ligands that bind the asialoglycoprotein receptor on liver cells. The company is hopeful this second-generation molecule will be superior in both indications because it’s more potent than Onpattro, with far more convenient dosing and delivery. Wild-type disease affects about ten times as many people as the hereditary form, so the market stakes are high. “We’re really quite eager to see what the tafamidis results are,” Maraganore said in early August. ALN-TTRsc02 should begin phase 3 by year’s end.

Alnylam’s second-generation drug should eventually supplant Onpattro, which is only approved for hereditary disease. Onpattro uses a delivery system that Alnylam no longer pursues. Double-stranded siRNAs need to evade nuclease degradation and the innate immune response and then enter cells, where they must escape the endosome to load into RISC for sequence-specific cleavage of target mRNAs. Alnylam’s early solution was encapsulation in a lipid nanoparticle (LNP). When the company set out to treat TTR amyloidosis, the LNP was “the only technology that had really been demonstrated to work,” says Rachel Meyers, Alnylam’s former head of research. “It led to a very elaborate discovery effort to optimize it.” The result is an effective drug, but Onpattro is not perfect. It’s still immunogenic enough to require steroid pretreatment to minimize reactions to its 80-minute IV infusions, given every three weeks.

Although Alnylam is no longer developing LNP drugs, some RNAi companies are still pursuing LNP delivery, as are many working on CRISPR–Cas gene editing and therapeutic modified mRNAs. Patisiran’s approval “is a very big step forward for the guys that are going to come behind, in gene editing and mRNA delivery,” says Meyers, now entrepreneur-in-residence at Third Rock Ventures in Boston.

Even before Onpattro entered the clinic, in 2012, Alnylam was looking at GalNAc-conjugated siRNAs as an alternative to LNPs. GalNAc delivery requires extensive modification of the siRNA, as it is no longer protected from nucleases by the LNP. Alnylam eventually worked out a specific pattern of O-methyl and fluoro modifications at the 2´ position of the ribose, along with fewer phosphorothioate modifications (a sulfur substituting for one of the non-bridging oxygens) in the backbone, with spectacular results. In phase 1, a single subcutaneous dose of Alnylam’s GalNAc-conjugated siRNA, ALN-TTRsc02, knocked down 80% of the TTR target for a full year. The drug, says Khvorova, “is very close to perfection.” Alnylam plans to start phase 3 for ALN-TTR02 (with subcutaneous dosing every three months) by the end of 2018.

Other Alnylam drugs, all for liver diseases, are even further along. The company expects to submit an New Drug Application for givosiran, for acute hepatic porphyrias, by year’s end. Inclisiran, for hypercholesterolemia, and fitusiran, for hemophilia, are in phase 3. (Inclisiran is partnered with The Medicines Company in Parsippany, New Jersey, and fitusiran with Sanofi Genzyme in Cambridge, Massachusetts.). Competitors Dicerna Pharmaceuticals in Cambridge, Massachusetts, Silence Therapeutics in London, UK and Arrowhead Pharmaceuticals in Pasadena, California also have GalNAc-conjugate siRNAs in development. According to Khvorova, the field considers the problem of liver delivery basically solved with GalNAc.

Except, she adds, for a few lingering theoretical toxicity concerns. One is the 2´-fluoro modification. Ionis scientists have reported that treatment of cells with 2´-fluoro-modified antisense oligos results in the off-target binding and knockdown of several DNA repair genes, resulting in cell death in in vitro assays (Nucleic Acids Res. 43, 4569–4578, 2015). A second worry is that high levels of persistent siRNAs might outcompete endogenous microRNAs for RISC loading, with unpredictable biological effects. Finally, superstable siRNAs might accumulate in endosomes and lysosomes, with toxic consequences. “So far there is no indication that there are any issues,” says Khvorova. “But … things can pop up years after you administer a compound.”

Fueling the concern is revusiran, Alnylam’s original GalNAc conjugate for TTR amyloidosis. Alnylam discontinued revusiran in phase 3 because of the high number of deaths in the treatment arm relative to the placebo group (Nat. Biotechnol. 34, 1213–1214, 2016). Alnylam stock plunged 49% on the news. The company’s subsequent analysis could not rule out a drug effect. “The tox was there and the tox was real,” says Khvorova. “That is why we have those lingering concerns.”

“There is reason to believe [the death imbalance] might be a chance occurrence, but we can’t exculpate the drug,” says Maraganore. “That’s unfortunate.” But he points out that the newer, more potent GalNAc compounds use doses 20–100 times lower than revusiran’s. Alnylam also conducted rodent studies showing that 2´-fluoro modifications and RISC loading were unlikely to contribute to liver toxicity from siRNAs at supraphysiological doses (Nat. Commun. 9, 723, 2018). The company will soon move newer oligonucleotides into the clinic that appear to be even safer. These incorporate a single GNA (glycol nucleic acid) into the siRNA’s antisense seed region, the part of the molecule that recognizes the target mRNA, which would reduce off-target base pairing. The company is also developing an antidote to its long-acting GalNAc-siRNA conjugates (Nat. Biotechnol. 36, 509–511, 2018) to shut them off if necessary.

For the moment, Alnylam can savor its first drug approval, the fruit of 15 years of continuous effort. The company survived the pharma backlash of 2008–2011 battered but intact, thanks to an ample cash cushion. “Alnylam was able to weather the storm of pharmaceutical companies being naysayers because they had the resources, plain and simple,” says Meyers. Now the company must build on Onpattro to establish RNAi as a platform technology. After so many failures, says Khvorova, “it will require some more successful stories, not just one patisiran, to rebuild … investor confidence.”