Organoids are three-dimensional structures that mimic the in vivo organ. These mini-organs are grown from either adult stem cells (ASC) or pluripotent stem cells (PSC): two complementary approaches. PSC-derived organoids are created from embryonic stem cells or induced PSCs. These organoids imitate organogenesis and generally form beautiful, yet immature structures. ASC-derived organoids on the other hand are epithelial structures that closely resemble the physiology and pathophysiology of the mature organ. Organoids derived from ASCs were first grown in the lab of Hans Clevers, where in 2009 mini-guts were created from the mouse intestine. These were self-organizing and self-renewing epithelial structures that mirrored the crypt-villus architecture and contained all cell types present in the in vivo intestinal epithelium. [1] After this discovery, organoids were grown from many human organs, including the stomach, intestine, colon, liver, pancreas, lung, breast, bladder and prostate. [2-9] ASC-derived organoids are driven by the cells responsible for homeostasis and regeneration in the fully developed organ. The textbook example of ASCs are the LGR5+ intestinal crypt stem cells that create and sustain the continuously renewing intestinal epithelium and give rise to all types of differentiated cells (Movie 1). The intestine in particular contains a defined stem cell niche. However, other organs such as the liver, pancreas and kidney do not have such a clearly demarcated stem cell niche. [10-13]

Back in 2008, just after the discovery of ASC-based organoid culturing, a new collaboration was forged between scientists from the lab of Hans Clevers at the Hubrecht Institute in Utrecht and nephrologists from the group of Marianne Verhaar at the University Medical Center Utrecht. Since the kidney lacks a defined stem cell niche, the first aim was to better understand the stem cell dynamics in this organ. The second goal was to then use this knowledge to grow ASC-derived kidney organoids. Driven by enthusiasm, Maarten Rookmaaker started working on these research lines in the laboratory in the early mornings, before the start of his nephrology outpatient clinic. Together with his fellow postdoctoral researcher Nick Barker and the PhD student Frans Schutgens, he used lineage tracing to identify both LGR5 and TROY as markers of stem cells in the developing and mature kidney. [14,15] Using this knowledge in combination with the expertise on organoids and renal physiology, Schutgens and Rookmaaker then succeeded in developing mouse kidney organoids and ultimately human kidney organoids. [15,16] These structures consisted of polarized proximal tubule, loop of Henle, distal tubule and collecting duct epithelium and were therefore named tubuloids (Figure 1). These tubuloids appear to mimic the renal regeneration response, in which severe tubule damage is repaired by a burst of proliferation in the otherwise slowly proliferating renal epithelium. Therefore, tubuloids have great proliferation potential while remaining genetically stable. Initially, tubuloids were established directly from patient-derived kidney tissue obtained through a biopsy or surgery. To explore the possibility to obtain easy access to kidney cells, we then tried to grow organoids from urine as well. Indeed, when Schutgens attempted to grow organoids by plating the cells derived from the urine of his colleagues, he saw structures appearing after a couple of days in culture. The possibility to grow tubuloids from urine opened up a whole range of interesting possibilities. For example, it allows the creation of tubuloids from patients with diseases that do not require a kidney operation.

Figure 1. Tubuloids are three-dimensional polarized structures that consist of epithelium from various segments of the nephron.

The next step was disease modeling with tubuloids, with the prospect of translation to the patient. Tubuloids were infected with the BK virus (BKV), an infection that typically manifests in kidney transplantation patients and that can result in loss of the transplanted kidney. To our amazement, infected tubuloids accurately recapitulated the phenotype of BKV infection (Figure 2). Furthermore, the drug cidofovir reduced viral replication in clinically relevant concentrations, which emphasizes the potential of this ex vivo model for human disease and therapy. We proceeded to also investigate hereditary disease and created tubuloids from the urine of a cystic fibrosis (CF) patient. For this purpose, we used the well-established forskolin swelling assay, a test that is used in intestinal organoids from CF patients to determine drug efficacy. The CF tubuloids showed the expected reduced swelling upon CFTR activation. Tubuloid swelling was restored to normal using the drug that also clinically benefitted this patient, demonstrating the potential of patient derived organoids for personalized medicine. Finally we grew ‘tumoroids’ from Wilms tumor tissue and found that these were very different from healthy tubuloids and displayed the genetic profile and triphasic histology characteristic of this disease. Tubuloids can be used to accurately model a broad spectrum of renal diseases and allow screening for effective treatments. One can imagine the generation of biobanks of tubuloids from patients with a particular disease to identify key pathophysiologic mechanisms and effective therapies.

Figure 2. Tubuloids infected with BK virus adapt a phenotype characteristic of the disease: enlarged nuclei (a) that contain viral antigens (b, c) and the presence of actual viral particles in the nucleus, here visualized by electron microscopy (d).

Taken together, the multidisciplinary effort between developmental biologists and nephrologists led to the development of human ASC-derived renal tubuloids. We expect that these tubuloids will help unravel the mysteries of the kidney and greatly improve the care for patients with renal disease. 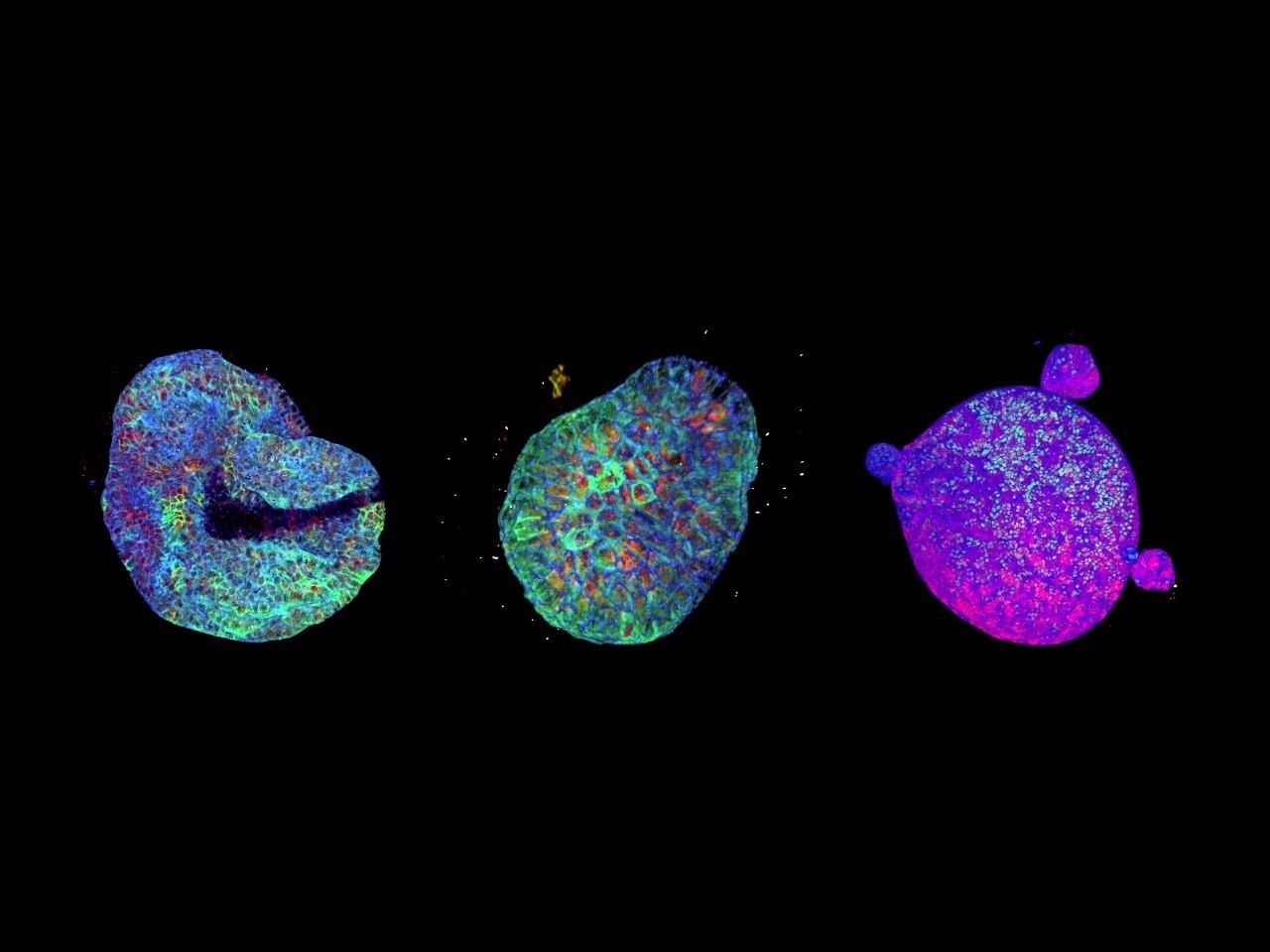 The story behind the development and application of human adult stem cell-derived kidney tubuloids created from kidney tissue or urine.